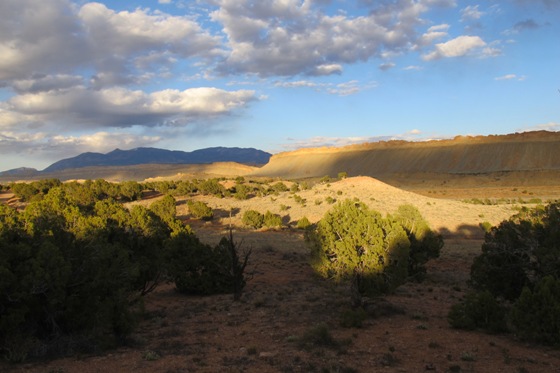 Now, I’m not trying to steal the thunder from my friend and colleague Jenn Milyko, who one of these days might want to write about the Utah Cliffs Loop in her “milestone routes” series. Among other nice things she does, Jenn occasionally supplies me with packages containing two of my food groups — Twizzlers and CornNuts — so I definitely don’t want to make her mad.

I won’t even tell you here why Utah Cliffs is a milestone route (but it is). I’ll just offer up a few thoughts on the loop, since I’m the one who laid it out about a decade ago.

First off, the four-wheel-drive Chevy Blazer I rented to do the research with was the only rental car I’ve ever gotten that was brand-new. If I remember correctly, the odometer had 14 miles on it when I drove the SUV off the lot. Suffice it to say that if Avis had known where I’d be going on that trip, they probably would have supplied me with a rig that was a little more “seasoned.”

I call this the Rodney Dangerfield of routes because I don’t think it gets anywhere near the respect it deserves. Director of sales and marketing Teri Maloughney tells me that just 70 copies of the route's map sold in 2009 (that compares, for example, to the 175 maps for the Allegheny Mountains Loop in Virginia that sold during the same time period). Yet this is one incredible piece of bicycling territory, simply spectacular. And, with its combination of dirt, gravel, and paved surfaces, it just might be the ultimate “Any Bike, Anywhere,” Rough Riders route.

At 287 miles in length, the Utah Cliffs Loop is a study in contrasts. Its biggest problem, if you want to call it that, is its extreme elevation differences, ranging from 2,500 feet above sea level at the starting/ending point of St. George, to roughly 10,000 feet above sea level in the mountains high above Cedar City. This means there’s a very short window of opportunity to ride it when it’s not too hot in the desert and not to snowy or muddy at the loftiest elevations. Probably mid-September to mid-October would be an ideal time to hit the trail.

Highlights along the way include Snow Canyon State Park, Navajo Lake, and Zion National Park. The quick zip from Navajo Lake to Zion, down the North Fork of the Virgin River, in my opinion is one of the great dirt-road descents of the West.

I could tell you more, but you really should go experience it for yourself.