The Katy's a Keeper 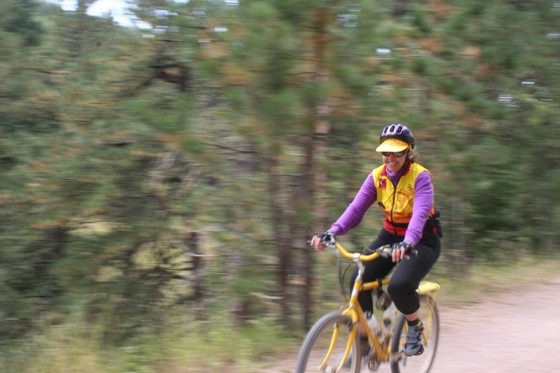 The 225-mile Katy Trail State Park is one of the crown jewels of North America’s rail-trail system. It follows a former route of the Missouri-Kansas-Texas Railroad -- the MK&T, or Katy for short -- between St. Charles and Sedalia, Missouri. A quiet artery, the Katy Trail transports cyclists and other self-propelled travelers through the heart of Missouri. On a grander scale, the riverside portions of the trail between St. Charles and Boonville serve as components of a pair of trails that are national in scope: the Lewis and Clark National Historic Trail and the coast-to-coast American Discovery Trail.

The trail takes travelers past dense hardwood forests, wetlands, sheltered valleys, manipulated crop fields, and occasional patches of restored tallgrass prairie. Redbud and a host of spring wildflowers bid colorful adieu to the drab days of winter, while autumn explodes in a multi-colored confusion of shrubs and hardwoods, highlighted with the flaming reds of sugar maples. Some cyclists tackle the entire trail over a period of four or five days, usually staying at indoors accommodations. More common are day trips, either out and back on the trail, or on a loop fashioned by pedaling a portion of the Katy Trail along with some adjacent low-traffic roads. (The contrast is startling: while the Katy Trail is flat and straight, the roller-coaster roads surrounding it are anything but.)

A few years ago my wife Nancy and I pedaled a day-ride sampler that began in Rocheport, an attractive burg containing numerous bed-and-breakfast inns and pre-Civil War homes. From the trailhead, we rode east on the trail as it squeezed between marshlands to our right and timbered bluffs on the left. Soon we came in beside the Missouri River -- wide, deep, brown, and alive with twirling whirlpools and bobbing logs. The sight of scores of swallows darting in and out of their bluffside abodes was accompanied by a less expected vision: that of the occasional Canada goose roosting on a rock ledge. We also spotted red-headed woodpeckers and numerous other birds in huge cottonwood snags protruding from a trailside slough. Looking through a dense veil of vegetation, we could see steep drainage ravines cutting through private lands to the north. Elsewhere, we zipped through sun-dappled fields where gorgeous spreads of spiderwort -- with its trio of violet-blue petals and bright yellow stamens -- rivaled the electrifying brilliance of an indigo bunting we saw flashing past. At our turnaround, near a series of sycamore-smothered bluffs, we watched blue herons standing tall in wetlands lying between the river and the trail. On returning to Rocheport, we stood on the bridge spanning Moniteau Creek, peering down at the water to see red-eared sliders drifting downstream aboard logs.

Indeed, the Katy is a keeper.

Sounds like a great trail. Will not be able to explore all 225 miles but the hardwood forests, wetlands the valleys and the prairies is already tempting me. Thanks for sharing on such such a great place.

Hmm the Katy Trail sounds great, I'll have to try it out sometime!

Ha! That sounds great! I just recently got my old bike pump out and am going to give it a go again!

Thanks for the inspiration!

Hi Mitchell and Zan - I hope you both get a chance to try part, or all, of the route! Best of luck! For some tips on touring, check out our how-to department: http://www.adventurecycling.org/features/howto.cfm.

Wow! That really does sound like a great ride! I can't imagine all of that history packed into a trip - especially from the Civil War era, that always is intriguing to me. I definitely cannot do 225 miles in any short amount of time though, that would seriously take over a week for me at the level I am at right now.

Cool. I'll have to try this trail when I visit my cousins in Missouri