The Bustamantes Hit the Trail

Elle Steele Bustamante out of Sacramento, California, is the author of this week's fun-filled Bike Overnight. Titled Our First Ever Family Weekend of Wonderfulness, Elle wrote the story as her first step in documenting a year of living almost car-free by the family of four. (If they didn't have a year left on their Prius lease, she says, they would go totally car-free.)

Writes Elle: "On this, our first ever Weekend of Wonderfulness, we rode up to Beal's Point on Folsom Lake, about 30 miles from Sacramento. It was the first time bike camping with our little ones. Amazing! It's great to know that there are adventures so close to home."

The final sentence of the previous paragraph, along with the following passage, perfectly sum up the potential beauty and convenience of a Bike Overnight: "Really, picture a nearby campground. You probably wouldn't ever think to camp there as, let's face it, your own bed is much more comfortable. However, getting there by bike with all your gear strapped to the back -- that's wonderfully worthwhile.

"Jose took the boys in the trailer and the panniers with the sleeping bags on our touring bike. I attached a milk crate box to my Yuba Mundo Cargo Bike and loaded it up with firewood, packed the clothes and food in my panniers, and strapped the tent to my rack. 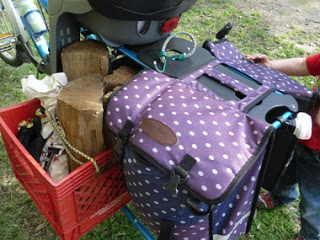 "The ride is beautiful -- 90 percent or so along the American River Bike Trail. The shady route is comfortable and it's fun to watch the surroundings change as you get closer to the foothills. The terrain is mostly flat, with little rolling hills that grow bigger as you get closer to the Folsom Reservoir. There are a few places where you have to get off the trail and maneuver the streets, but it's still very easy to get around. We got lost once, but had no trouble finding some helpful bikers who were happy to keep us pointed in the right direction."

Later, after setting up camp at Beal's Point, the family chowed down on quesadillas cooked over the fire, then hit the hay early.

"I love having kids that go to bed at 7 p.m.," Elle writes; "it's the best excuse for the grown-ups to tuck in at the same time! We did learn that no matter how small your children are, you still need a four-person tent. We have officially outgrown our little two-person tent." 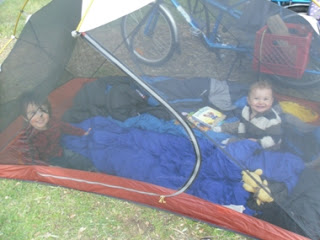 When all was said and done, and the family had returned safely home the next day, Elle summed it up simply: "It was a beautiful, quick trip. Just enough of a ride to recharge our senses and get back in touch with nature."

Read the rest of the Bustamante family's tale, and see more photos of their trip, at BikeOvernights.org. There you can also scroll through our archives of posted stories and Photos of the Week.