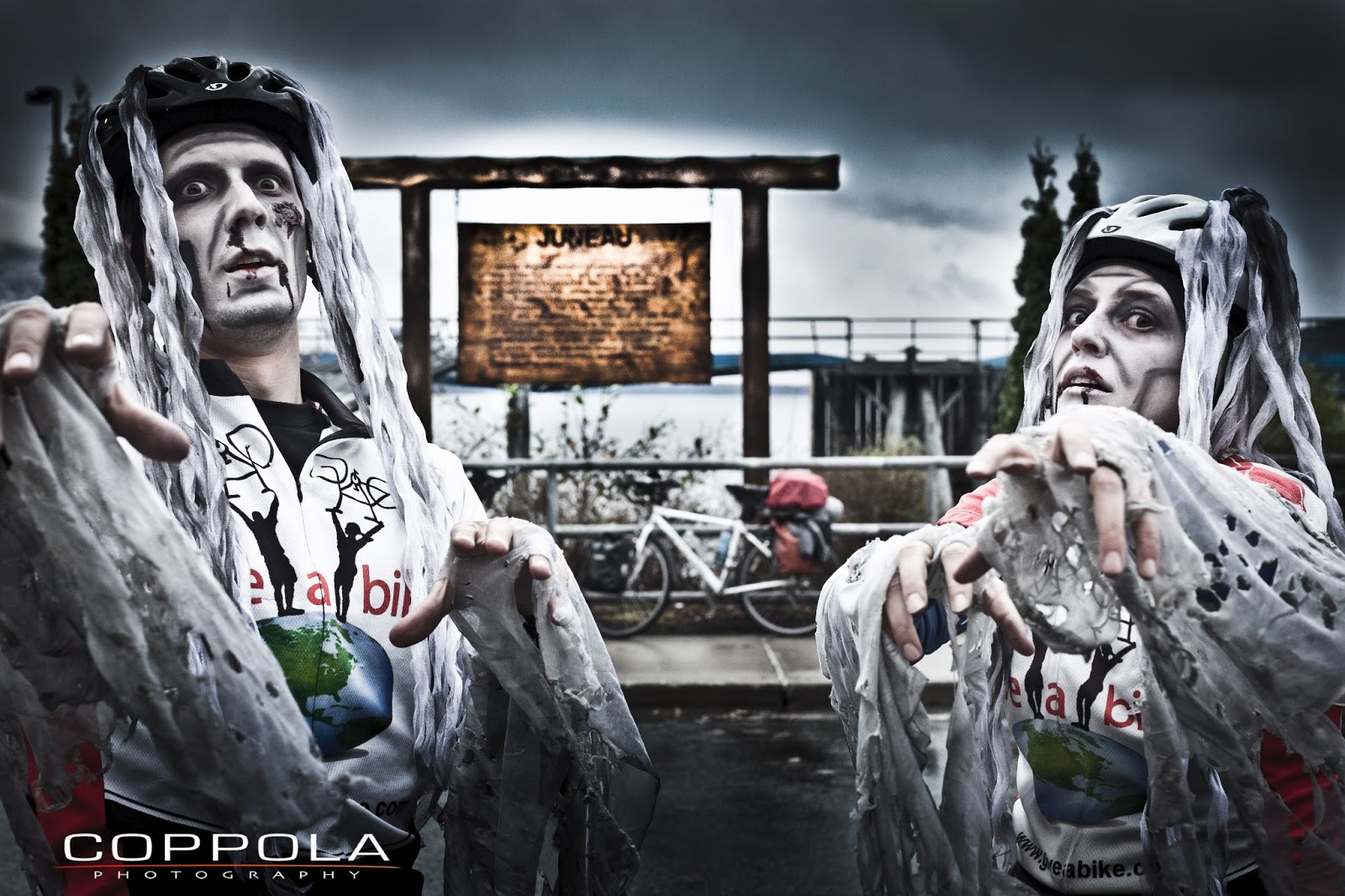 Earlier this year we were tipped off that the AMC Network will be pushing out a new television series later this fall. The working title is The Biking Dead, and it is set to air along side their popular The Walking Dead series, which will be entering it's fourth season this year.

Adventure Cycling was granted an exclusive interview with the producer of The Biking Dead, Frank Darabont, and we're excited to give you an insider's look at what you can expect from this new series.

Adventure Cycling: Frank, thanks for taking time out of your busy schedule to meet with us. The Biking Dead, it seems like bold move bring this new series out when you're critically acclaimed The Walking Dead series has been renewed for a fourth season. What makes you confident that two similar shows can survive in tandem like this?

Frank Darabont: Thanks Josh, it's great to be in Missoula, you've got a lively bike culture brewing here. To answer your question, we believe there's a large viewing population that is catching onto our Walking Dead series late in the game. We want to give them a chance to see the beginning, without back tracking on current episodes. After all, with any zombie apocalypse story, it's the beginning of the zombie threat that provides the most intrigue, and we want our viewers to fully capture that excitement.

FD: Absolutely. The new series will immerse itself in the same threat, under the same time frame. The big difference, aside from the bike angle, will be that we're going to focus on a west coast group of survivors. We'll explore the ways they interact with each other, and how zombies adapt to their surroundings in this new environment.

AC: You knew this question was going to come quick. Why bikes?

FD: A couple reasons, actually. First and foremost, we want to be progressive as far as expanding the limits of what zombies can do. In George Romero's 2004 remake of Dawn of the Dead, he added an element of speed to zombies. All of a sudden, zombies could outrun you, whereas in the past, they could only hobble around. The next logical step seems to give zombies a greater element of coordination, which allows them expand their mode of transportation to bicycles. It also helps that the popularity of bicycles is taking off.

AC: There are a ton of different styles of bikes out there; Road, touring, time trial, fixed gear, bmx, and the list goes on. Can we expect to see a mixed bag of bikes, or are you going to try and stick with a certain style.

FD: To be honest, bike selection was a big topic of debate among our writers. I'm not sure the average viewer is going to immediately buy into a zombie on a two-wheeled bike, so we're going to put them on recumbent trikes for most of the first season. Maybe toss in a kids bike with training wheels here and there, but mostly recumbent trikes. If we came out of the gates with a zombie riding a unicycle while juggling pies, we would be dismissed in a hurry. We do think the recumbent will add an element of surprise, however, since the rider sits below eye level and could sneak up on someone quickly, but we'll see. It's an experiment for sure.

AC: How about the heroes of the story, will they utilize bikes as well, or will they opt for automobiles instead?

FD: I'm really glad you brought that up. We're going to start the survivors out in cars, but access to fuel, and the deterioration of roads will force them over to human powered transportation. It's sort of a social commentary message we're pushing.

AC: You mentioned earlier that this will take place in a west coast setting. Can you narrow that down for us? I'm sure some of our readers would love to get out and catch a filming session. I know I would.

FD: The show will be set in Portland, Oregon. It's huge bike town, which will segue into the zombies having a sort of intuitive notion as to how bikes work. While it's set in Portland, we will actually be filming up in Vancouver, Canada. The landscape has some similarities to Portland, and it will give us a chance to collaborate with a film crew in the same town that is currently shooting the Supernatural series. We actually tried to tap Supernatural's Jared Padalecki for our lead role, but he had too many other commitments.

AC: I'm going to ask a spoiler alert question. Are there any big surprises that you can fill us in on?

FD: Spoiler alert indeed. I'll give you one kernel to chew on. Early in the first season, the survivors will create an alliance with a small population of vegan zombies who will feed on grains, as opposed to brains. The concept was a late edition that was drawn up after scouting Portland for cultural references.

AC: Wow, that might be good place wrap it up. Frank, thanks again for the interview, I think our readers are going to Tivo the crap out of this.

FD: I'm confident they'll enjoy it. Like The Walking Dead, we'll push this through Netflix as well. We want to maximize available viewing outlets for our viewers. Thanks for having me.