The Art Of (Not) Planning For A Bike Tour

We get a lot of questions about planning through our Travelling Two bike touring blog, and every time someone emails us to ask which panniers are best or how many T-shirts they need to pack, I think of Lee. 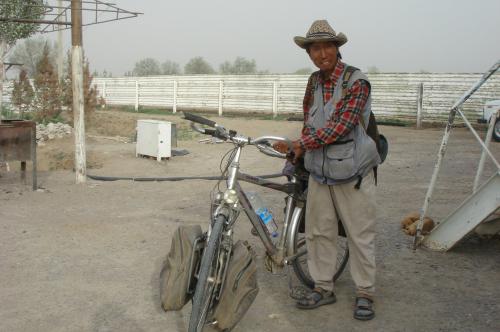 We literally ran into Lee in the middle of a sandstorm on a long and lonely stretch of road in Turkmenistan. We were going east. Lee was going west. Since we were the only bike tourists either of us had seen in weeks and we somehow had the good fortune to meet each another outside the only cafe for 100km, it seemed only right to stop and have a drink together.

Over a glass of soda, Lee told us that he was from China and he'd been cycling for 14 years. When we asked exactly where he was going, Lee wasn't sure. He held out his hand and waved it roughly towards the west. Iran, perhaps. Or maybe Armenia.

Lee's bike was as haphazard as his route. Everything on it was a wreck. The panniers in particular stand out in our minds to this day. They were faded, crumpled bits of fabric. Every zipper on them was broken; split wide open. Inside, Lee had crammed his bags full of photo albums. We aren't sure if he had any of the cycling "essentials" like a tent, stove, or rain jacket. Somehow, Lee struck us as the kind of man who just might manage without.

In spite of this stunning lack of planning, limited equipment, and basic bicycle, Lee had managed to bike through 100 countries. Clearly he was not the kind of man to let something as trivial as knackered bicycle, bureaucratic hassles, or a lack of technical equipment get in the way of a good time.

This encounter made us think that most of us probably plan too much. We can spend months before a trip sketching out every last inch of a route and buying endless pieces of gear. We set out on bike tours and big adventures because we want to get away from the routine, and yet we try to plan for every unexpected moment and make our adventure as predictable as possible.

It's not that a bit of planning doesn't make things easier or more comfortable, but it's equally easy to lose sight of the fact that the most important thing is to get on the bike -- any bike that's still capable of moving -- and ride. Nothing more. Nothing less. Just pedal.

FRIEDEL GRANT launched into bike touring with a tour around the world with her husband. They pedaled 48,000km through 30 countries before settling down to ride bikes in The Netherlands. Friedel writes about bike touring on her website, Travelling Two, and you can follow her on Twitter (@travellingtwo). She also contributes to Transitions Abroad and has written a chapter for the Adventure Cycle-Touring Handbook.

I am always inspired by simplicity and finding out that we dont die if we "do without certain things." nice post! Right on Lee!!!

Cheers to Lee and to you guys for the post. I recently met a Cajun named Rick down in LA who was 'touring' with a couple of bags, two fishing poles and a prosthetic leg. He was sweeping up the parking lot of a restaurant to earn his lunch (and smiling doing it). I was humbled.

Next time I'm worried about taking the "right" rain jacket along with me to ride around town, I'll think of Lee.

Great post. This one's gonna stick in my head for a long while.

Thanks for taking the time to send this one up...