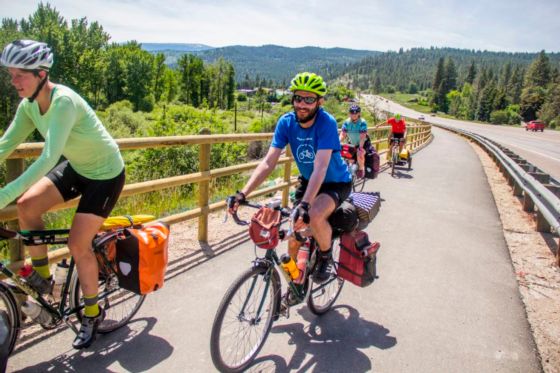 For National Bike Travel Weekend, Adventure Cycling staff organized a bike overnight. For me, it had been quite a while since my last overnight trip up the Rock Creek drainage, so it was time for a little spin up the Bitterroot Valley to the Charles Waters Campground.

Our perfect route traveled thirty miles each way with only a bit of climbing at the very end. We mostly covered quiet roads out of Missoula and a bike path. The only unpleasant part was riding on the shoulder of U.S. Route 93 from Missoula to Lolo, one of western Montana’s busiest highways. Luckily, the Bitterroot Trail from Hamilton to Missoula will gain a separated bike path on this tricky Missoula to Lolo section this summer. See evidence of its construction in the photo below and ride it with us during the Montana Bicycle Celebration, July 15–17. 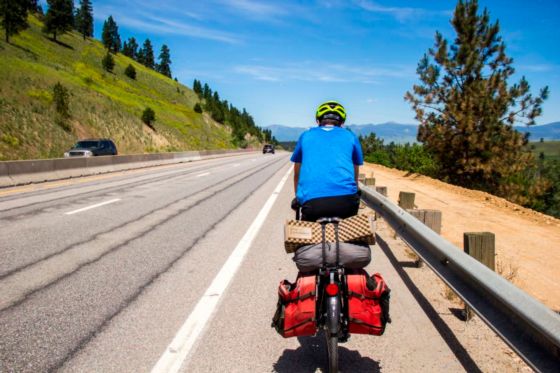 I arrived for our Saturday morning start 15 minutes late with one of my panniers half hanging off my rack. Oops! My coworker helped me adjust it. “Have you used this setup before?” she asked. Well, I’d used these bags and the rack before, but just not on this bike. OMG, I miss my Velo Orange Campeur SO MUCH and a replacement fork, necessary after my crash, can’t come fast enough! 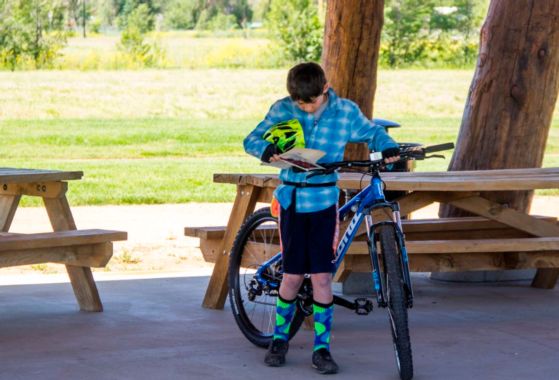 After adjusting my gear and posing for the mandatory photos, we saddled up and, hissssss, my entire rear tube deflated. While this would take me 20 minutes to repair, it took my skilled coworker only two minutes. So, we headed off ... but before we even left the bike trail, my rear fender started rubbing. If you know about my crash, you know about my fender issues. Luckily, we resolved this problem too and we were FINALLY on our way!

We cycled down roads I’d only heard about, like Big Flat Road. The first half of the group went ahead, agreeing to meet us at Lolo Peak Brewery for lunch. My half of the group, the mechanically hexed and slower riders, followed up shortly after. Yes, the youngster is holding root beer. 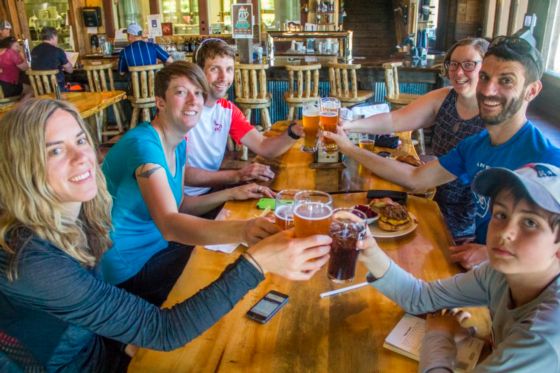 After tasty pub fare, we took off and this time on the completed section of the Bitterroot Trail between Lolo and Hamilton. Pavement instead of chip seal, no cars going by at 65mph, just the occasional pedestrian and other cyclists — super-pleasant, relaxing riding.

I stopped under one of the few shady spots to reapply sunscreen for the third time, but the sunny-weather skin damage had already been done. At the grocery store before the campground, I picked up some aloe to soothe my sunned shoulders. Ouch! 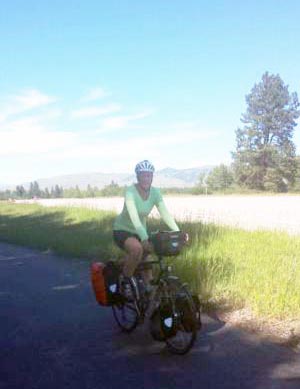 After a long climb into camp, I set up my tent, changed into camp clothes, and sat in the shade with the others, snacking on cheese and crackers. It felt so good to be away from town. 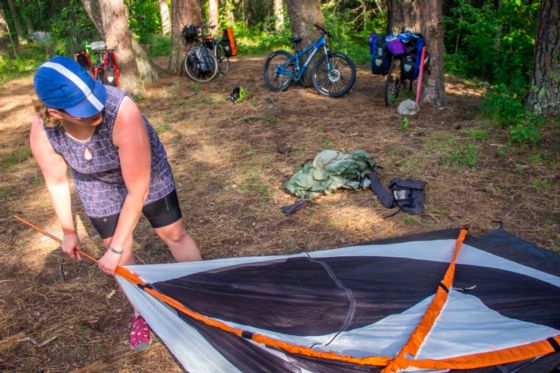 We collected tinder and kindling and built a fire, then prepared our hobo dinners — YUM! — roasty vegetables cooked over a fire! Dessert included strawberry shortcake. Plus, I attempted to roast a bit of marshmallow, but it was such a hot day that my package of marshmallows conglomerated into one huge mallow! The chocolate also melted out of shape, but one of my campmates had some better preserved that I was able to smash between graham crackers with my burnt marshmallow bit.

After that, I curled in my sleeping bag and hearing the nearby creek, drifted off. There is something about that deep sleep you get when physically exhausted! 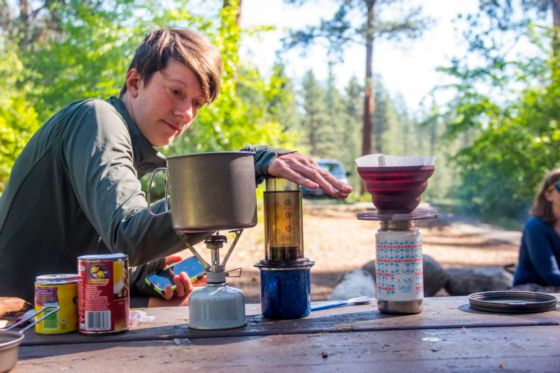 The next morning, we chatted around the fire over breakfast. I reheated my hobo dinner leftovers on the fire and had graham crackers, while others used their camp stoves for coffee, tea, and oatmeal. We packed it up, I applied a final layer of sunblock, and we flew down the hill back to the bike path and headed north.

Our next big 40th anniversary celebration is the Montana Bicycle Celebration. Will you join us? And this fall, join us on Bike Your Park Day, September 24. Hope to see you out there!

Photo 6 by Emma Wimmer | All other photos by Saara Snow