The following is a guest post by Andy Baur.

We have been home for over two months now and we still think of our trip every day – look at photos, share anecdotes, or privately reflect on our family adventure on our big bike in northern Spain.

In mid-June, my daughter Caroline, wife Betsy, and I completed our own pilgrimage on the Camino de Santiago from Pamplona to Santiago de Compostela. We dubbed it the 3-2-1 Tour: 3 people, 2 wheels, and 1 pancreas. I’ll explain the pancreas part in a minute.

Our mode of transport was the fully loaded orange beast of a triplet bike known as En Fuego. I dare say, judging by the reactions we got along the way, that this might have been the first time a triplet has traversed this ancient route — and there's a reason for that. I’m known for not keeping statistics on my rides and my gear, but I estimate the over ten-foot-long bike and its gear easily topped 110 pounds — considerable when negotiating slender and cobbled European streets or alpine passes. 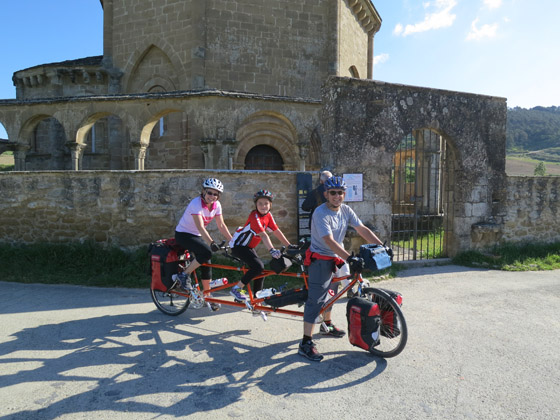 Why the Camino de Santiago? Well, here’s how we make decisions in my house:

Parent 1: What type of tour should we do for our first tour on the triplet?

Parent 2: How about something relatively close, flat, and easy, like a rail-trail?

Parent 1: Ok. Have you heard about the Camino de Santiago?

Parent 2: Isn’t that the long, hot, pilgrimage route with tons of hills halfway around the world?

The trip threw everything it had at us — rain, wind, double-digit climbs, brake-searing descents, and head-scratching way finding. But more importantly, it gave us brilliant examples of hospitality, camaraderie with our fellow travelers, stunningly beautiful countryside, inviting villages, and smiles.

In our travels over the years, we have noticed that two things open doors: Bicycles and children. When villagers and pilgrims saw the triple with a young girl smiling from the middle position, they were over the moon. At the top of climbs, a raucous cheer would erupt as we plodded past an outdoor cafe. In public plazas crowds would gather and gaze at the machine and take photos as if it dropped in from Mars. 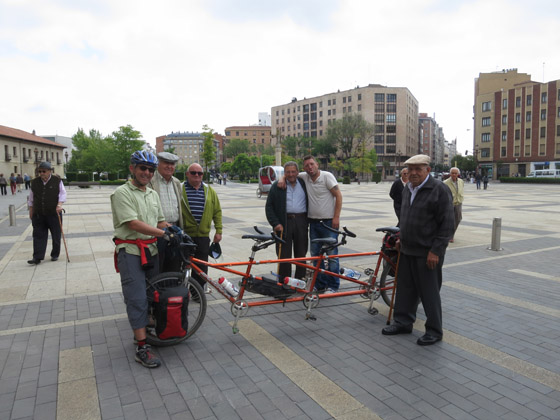 I don’t hesitate to say that the Spanish people are the kindest to travelers than any we have encountered. When I mentioned to a gentleman in a park that I needed a plug adaptor, he not only led me to the shop where they were sold, but refused to let me pay for it. Nearly every day we were struck by acts of kindness from our hosts. Much of this we attribute to the character of the Camino. Many of these people have done the pilgrimage themselves and were so struck by its aura that they built businesses and their lives around it.

Our route took us over alpine heights and the vast agricultural plains between Burgos and Leon. Nearly every city and village was founded as a point of respite and respect for the pilgrims that have traveled this route since the 10th century.

The majority of the travelers are walkers, but cycling is the chosen option for about 20% of the pilgrims. Marked by a painted yellow arrow or the symbol of a shell, the Camino track follows dirt roads, trails, cobblestone paths, 2000-year-old Roman roads, and the occasional paved road. We found the most enchanting sections to be those off the main roads, even if they were not the most triplet-compatible. 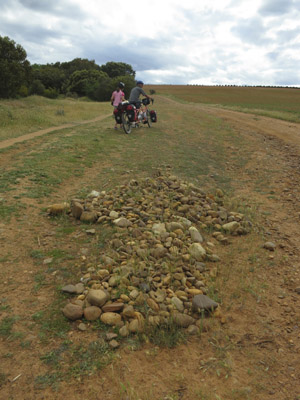 Accommodations range from the ubiquitous albergues (usually bunk rooms with shared facilities), hostels, hotels, and the occasional Parador — a castle refurbished into a fine hotel. We tried them all and found the albergues the best for engaging with fellow travelers, but opted for cheap hotels when a good night's sleep and a hot bath were in order.

Food for the pilgrims is simple, cheap, and plentiful with most restaurants and cafes offering a “pilgrims menu” — usually a variety of pork, potatoes, and a vegetable. As a bonus, wine was always part of the offering and being the only wine drinker among the threesome I usually had a bottle to myself, which made for a bit of a clarity deficit some mornings. While the fare certainly filled us up after a long day of keeping En Fuego upright, we at times yearned for some variety only to be too exhausted to go on a sub-pilgrimage of food finding. 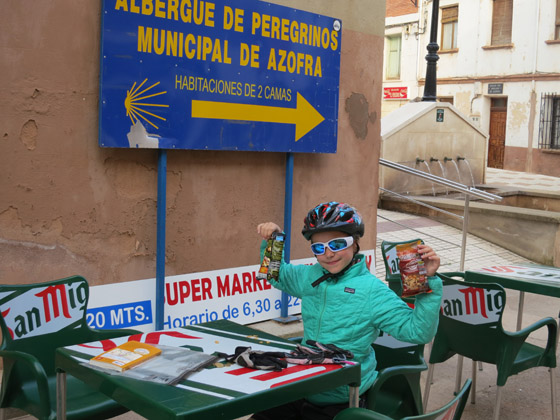 My family is not the most religious but we never were questioned or challenged about our reasons for doing this journey. Each person we met along the way was experiencing the Camino for a different reason: Some were on a pilgrimage to recover from the loss of a loved one, some to see the spectacular countryside, some to meet like-minded souls, and others to gain a more spiritual connection. It is difficult not to marvel at the religious grandiosity — towering cathedrals that took centuries to build and rebuild — but one could not shy away from layers upon layers of history punctuated by battles, large and small, creating a sometimes brutal history that belies the serene landscape. For the traveler, the history that oozes out of every pore of the cities and villages of the Camino would be overwhelming if it weren't for the gaps between them offering the opportunity to process and reflect. 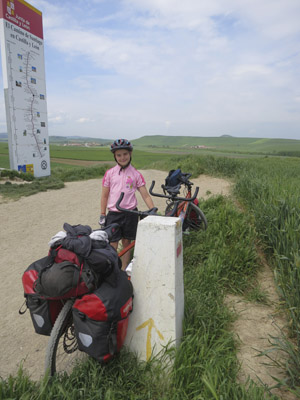 There were times when we felt pretty fortunate to be wheeled travelers among the booted. Some of the hikers could barely walk due to aching feet and blisters. Others took taxis and buses to the next town, too exhausted to make it to their planned stop. On steep hills the equation was reversed. Gravity overtook mass and En Fuego and its engines could no longer keep it moving forward. On the steep climb up to O’Cebreiro, over the last large mountain range, we walked the last four or five miles only to find that all lodging in the entire town was sold out. Besides completing the trip, our proudest achievement is that we never crashed or laid En Fuego over. (That noise you hear is me knocking on wood.)

But no matter the mode of transport, it was fascinating being part of a mass movement — an endless self propelled procession of people from every corner of the planet across the countryside. Each had a singular destination — Santiago de Compostela — but none had the exact same motivation.

As a family, we felt blessed to be challenged together. Our daughter, Caroline, proved not only up to the task but a true inspiration to her parents. Even while walking up a steep climb or squinting through the rain, Caroline continued to sing songs and laugh at our bad jokes. Some days she listened to a book on tape as she pedaled through the Spanish countryside. She engaged fellow travelers and our hosts in ways that made us proud and hugely relieved about embarking on such an arduous project. 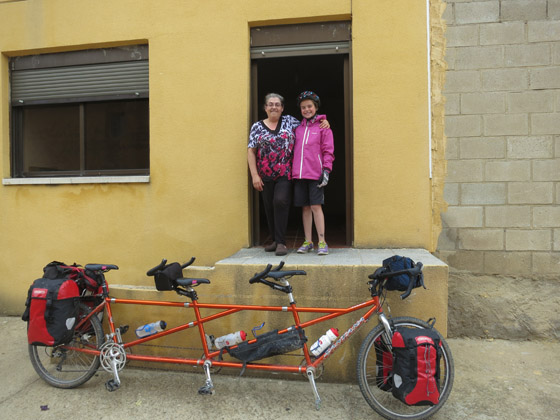 That brings me to the pancreas part: The trip celebrated the recovery from major surgery for both Caroline (one year ago) and Betsy (three years ago). Both share a gene that leads to acute pancreatitis that, if the pancreas is not removed, has a high incidence of pancreatic cancer. Pancreatitis is also one of the most painful conditions imaginable and Caroline was hospitalized over twenty times for severe pain in just three years. Therefore both had their pancreas, gall bladder, and spleen removed. Without their pancreases, Caroline and Betsy are now diabetic but can live full, pain-free lives. This trip offered us the opportunity to celebrate recovery and be challenged in a new way. 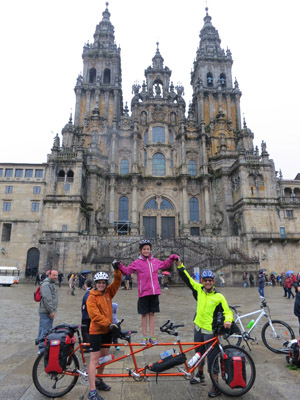 We completed the 700-kilometer, 14-day trip at the front of the grand cathedral in Santiago, one of the holiest places in all of Christianity. Our journey was certainly one of discovery and we are still trying to distill the experiences and friendships we gained along the way.

ANDY BAUR is secretary of the board of directors of Adventure Cycling Association and the executive director of Prickly Pear Land Trust in Helena, Montana. Andy and his wife Betsy have toured in Europe and South America, “but our most memorable was right out our back door through central Montana.” Now, with a three-year-old daughter, they’re getting quite familiar with rail-trails in the area. The Baur family is a life member of Adventure Cycling.

Wow! THAT IS SUPER IMPRESSIVE! Caroline - your smile looks so happy and what lucky parents you have. What a sweet girl... Looks fun!!!

Beautiful story, and so inspirational! Peace to you and your lovely family~

Thanks for posting! Very inspirational.

God has blessed you in more ways than one! Thanks for the article. This is one trek that has always intrigued me. Take care and wishing you many, many more happy journeys.

This is a wonderful story/journey. I would love to do this trail and I will do it someday. congrats and all the best to you and your family. Thanks for the inspiration!

I enjoyed reading about your trip. My wife and I walked from Le Puy to the foothills of the Pyrenees (with a short bus ride here and there). The history, stories, people, food, and traditions - what a wonderful family trip. I'm sure you have so many more stories to tell about your trip.