Thanks for Stopping By

Winters are long in Missoula. Winters are long at Adventure Cycling. We sit and wait and take bets on when the first cyclist will show up at our doorstep, letting us tour vicariously through them. This year, we had our earliest visiting tourist yet! And many poured in after him!

We offer every cyclist who comes through our doors ice cream, cold drinks, and a tour of the facility. Members who stop by (by bike) were given an Adventure Cycling bandana this summer and non-members were offered a six-month free membership. That's right. We love visiting cyclists.

We try to snap a picture of each of you who stop by and then put it on the front walls. 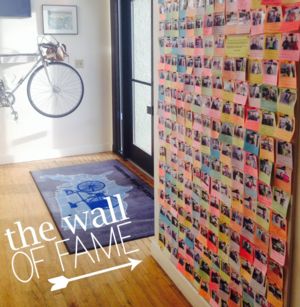 2013 was a great year for so many reasons at Adventure Cycling, but it was made especially awesome by the smiling cyclists who took the time to stop by and tell us about the tastiest taco trucks or the craziest person they've met on the road or their favorite sunrise yet. Thank you.

As an appreciation, we've put together a video compilation of all the visiting cyclists who stopped by in 2013.

It would really be neat to have a photo of the whole thing. That would be cool too. I've seen blogs, several, where the tourist took a photo of the wall and posted on their blog. I tried to get copies, but I was either not there yet or they were standing in front of my photo.

ACA ought to consider making a high resolution photo of the wall as a keepsake for those who make the trek.

Glad to have the video.