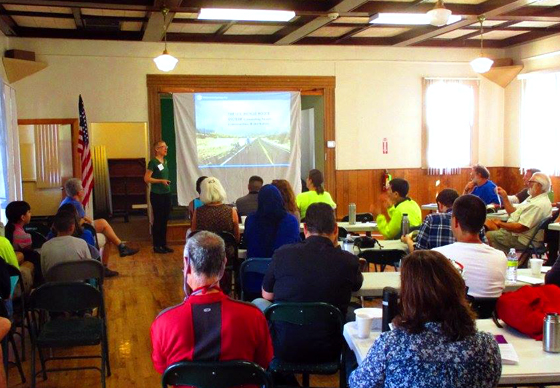 On April 23, 2016, I presented as the keynote speaker at the 2016 New Mexico Bicycle Summit, addressing 45–50 people on the topic of U.S. Bicycle Route (USBR) designation. It was exciting to see a growing enthusiasm for moving the designation of USBR 90 forward.

USBR 90 will be a tricky designation due to where it crosses the Arizona and New Mexico border. The natural inclination of someone without knowledge of the area would be to continue from Arizona straight across New Mexico on NM 9. Unfortunately, this road is not suitable for bicycle travel due to its proximity to the Mexican border, as well as its lack of services, most importantly, water. In addition, this routing completely cuts out the communities of Silver City and Las Cruces, both of which make efforts to warmly welcome weary bicycle travelers. 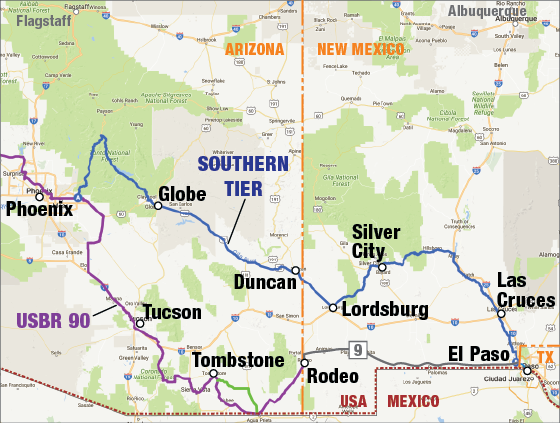 It’s going to be up to New Mexico’s cycling community and other advocates to work with New Mexico’s Department of Transportation (DOT) and the Arizona DOT to work out a connection that would include better cycling environments, while benefitting communities like Silver City and Las Cruces. One creative solution would be to designate an Alternate USBR 90 in addition to the main USBR 90 route.

Later in the summit, the Southern New Mexico Trail Alliance gave a presentation centered on the development of the Rio Grande Trail (RGT), “… [a] trail to run the length of [New Mexico] from Colorado to Texas”. A commission has been formed to explore the opportunities such a trail could provide in terms of recreational activities and economic benefits.

If the benefits of bicycle travel to local and regional economies can be impressed upon this set of commissioners — from cabinet secretaries to program directors to avid recreationalists — then the RGT and USBR 90 designation processes can be allies in the grand scheme of growing bicycle travel awareness.

New Mexico showed me a beautiful blue-sky day and cheerful cycling companions on the day after the summit. I was happy to get out on a bike for a short spin and participate in a local fundraising ride, Tour d’Optimist.

In the week following the summit, Tammy Schurr, a local advocate with Velo Cruces and Adventure Cycling tour leader, event director, and Life Member, brought together three more speaking opportunities for both of us, as well as a mini-driving tour of the region. 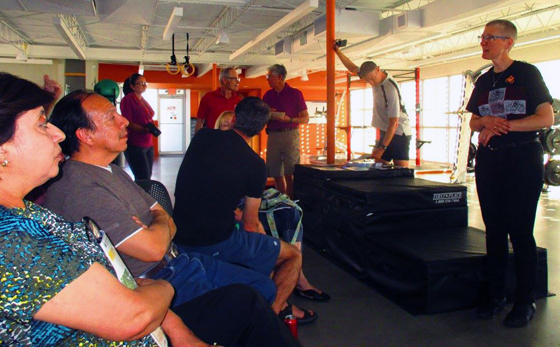 An Adventure Cycling regional gathering was held at Crazy Cat Cyclery in El Paso, TX. It was small but mighty! With an enthusiastic 20 attendees, everyone introduced themselves and their favorite places to tour. It was nice to see a few people had made the hour long drive over from Las Cruces, emphasizing the strong ties between these two cycling communities.

A meeting with El Paso city, county, and regional representatives

Scott White, policy director of Velo Paso, the cycling advocacy group in the El Paso area, brought together city planners and related staff to attend a presentation on USBR designation and its benefits. This was a good time to catch their attention since the City of El Paso is working on their Master Bicycling Plan.

There was a lot of excitement among the participants as the presentation became a conversation amongst them. The Southern Tier Route passes through El Paso and they are eager to add infrastructure and incentives for cyclists to linger in their city and potentially partner with New Mexico for an improved experience through the region.

Tammy’s presence and participation in this meeting was important to the process. She has a unique perspective to offer as a local advocate, as well as her wide range of experiences leading tours and researching routes in the region. I appreciated having a local voice speak along with me. It also gave the audience a face and name to connect with in the future. 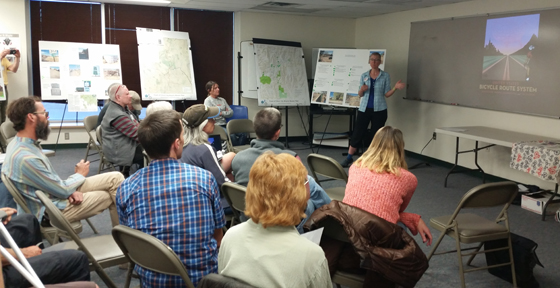 Tim Rogers, from Community by Design in Santa Fe, was hired to create a Bicycle Master Plan for Silver City. He put out an invitation for local advocates and city/county staff to attend a presentation on USBR designation and its benefits. In addition, with the Arizona routing of USBR 90, it will be important that cycling destinations such as Silver City be a voice in the NM USBR 90 designation process, so their interests and concerns are addressed.

Part way through my presentation, a couple of attendees got very excited about a local property, the “Waterworks building.” They immediately started tossing around ideas for improving it as an overnight destination for cyclists and hikers. Silver City is in a unique position in that they are located on two of our routes, the Southern Tier and Great Divide Mountain Bike Routes, as well as the Continental Divide hiking trail. They have also hosted a pro-level event, Tour of the Gila — celebrating 30 years in 2016 — that brings in thousands of visitors and cyclists alike to their town.

Later this same day, Tammy and I attended the public meeting for the Silver City Bicycle Master Plan. I spoke toward the end about the benefits of USBR designation and bicycle travel in general and Tammy offered the New Mexico cycling perspective. 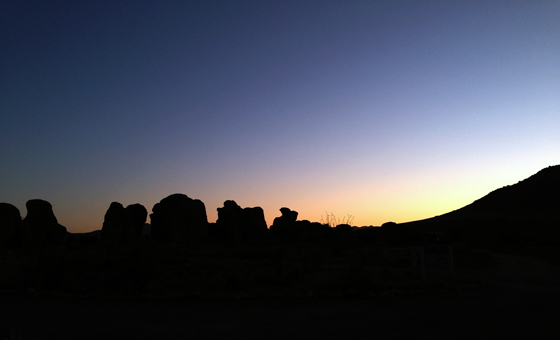 Woven amongst these meetings I was treated to some of the natural beauty of New Mexico. After a long soak in Faywood Hot Springs, we camped at City of Rocks State Park in an epic windstorm that left the skies clear for an amazing sunset and sunrise. 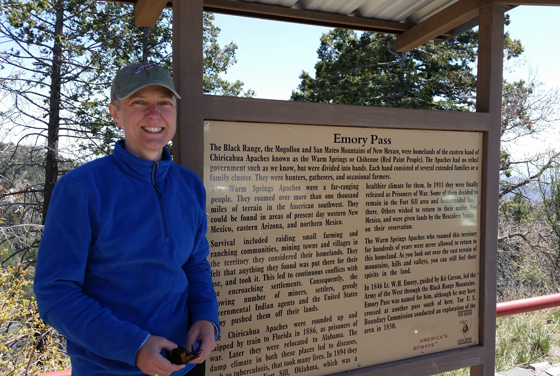 On our return to Las Cruces, we drove over 8,828 ft. Emory Pass, part of the Southern Tier Route. At the top we took in the damage from the Silver Fire of 2013, drinking in the recovering, forested surroundings, as we lunched in the spring sunshine.

Though this trip was months ago, my memories and the inspiration from it continue to fuel me and my work. I’m not sure when I will be back to New Mexico, but I’m pretty sure I will be. Maybe a tour that takes me over Emory Pass?

(Honestly, I’ve already been back! More on that later … teaser photo below.) 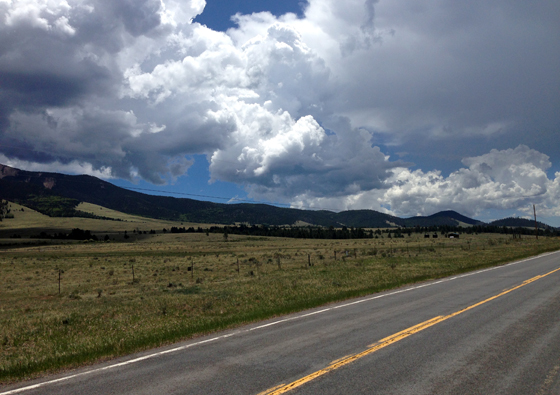 I just completed NM9 from El Paso to Rodeo, NM just a few days ago. Nothing short of the most spectacular views as you travel deep into the Old West. Lots of forgotten history out there. Incredible valleys and mountains. But yes, carry extra water and food. Little to nothing for supplies. Met some great folks in Hachita and the constant presence of the Border Patrol made me feel safe. Do it, New Mexico. Go ride.

Just came across this blog while surfing and I have one comment. I rode the Southern Tier East to West this Spring. Based on a conversation I had with two eastbounders in Marfa, TX, I opted to ride across NM 9 Santa Teresa to Columbus and up to Lordsburg via SR 113 and I 10. While outside of Columbus (a day's ride from Santa Teresa), the services are absent, the riding was magnificent. Great road, phenomenal scenery, no traffic. I sure would not let proximity to the border scare me away. We had a great time in Portales, Mexico, just 3 miles south of Columbus. While the services are sparse, that is no different than so much of the southwest. It just talks a bit of planning and flexibility.

That stretch was among the most memorable of my entire journey. Didn't have to climb Emory Pass, either.

On an individual basis, route selection boils down to personal preference. Personally, I would rather climb Emory Pass (a gorgeous area) and avoid riding I-10.

When designating a USBR, many factors come into play, not least of which are the efforts many communities put into welcoming cyclists. I am confident the AZ and NM DOTs will come up with a solution that works for a majority of the touring cyclist population.

If you advertise/sign/map this route, we'll come. Great that you are encompassing fuel/water/food stops. Keep on, keep on keepin' on!!

I have ridden across Route 9 on a southern crossing. It is an excellent low vehicle highway, with places to overnight in Rodeo and Columbus. There is generally a westerly wind in the spring time.

Thanks for visiting & talking to us all, and hopefully we can make bike tourism across New Mexico and far West Texas even better!

That's great, Scott! Thanks for the update. Let us know if we can offer any further guidance. It's exciting to see this happening in your region.