Surly, Ergon, and Shimano at Interbike 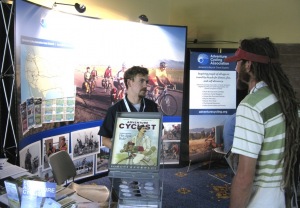 As Interbike moves indoors, there are more and more touring bikes and accessories to check out. Over the past few months I have been hearing plenty of rumors about some new bikes from Surly, so they were an easy choice for a visit. Without a doubt, Surly's Long Haul Trucker is very popular with  touring cyclists. For 2011, the Long Haul Trucker will be joined by the Trucker Deluxe, an S&S coupling version of the popular Long Haul Trucker. 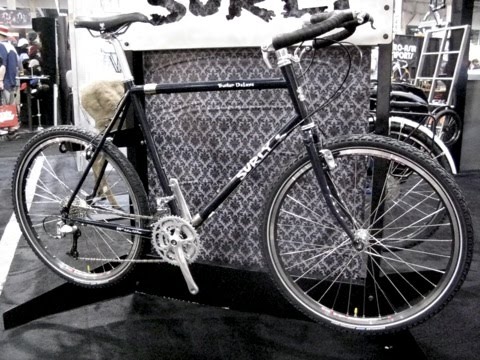 The Trucker Deluxe will only be available with 26" wheels, but a few 700c options may be added later down the road. Aside from the S&S couplings, the only difference between this and the Long Haul Trucker is that it does not have the third set of water bottle mounts on the bottom of the down tube, due to space limitations with the couplings. The bike is pictured above as a complete build, but it will be available as a frameset only. 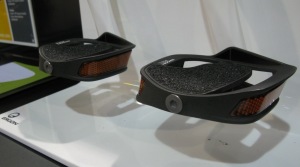 Ergon Bike Ergonomics was also on hand to display some new products, such as their PC2 Ergonomic pedal. For anyone out there who isn't crazy about clipless pedals or toe straps, the PC2 pedal is designed to encourage your foot to assume an efficient position on the pedal. It also aims to reduce slippage while pedaling without cleats or a strap to keep your foot in place. 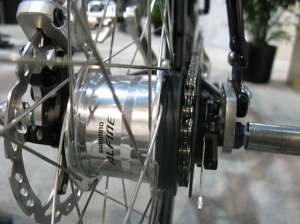 Lastly, Shimano had their new Alfine 11spd internal hub out on display. It looks to be a great improvement over their 8spd internal hub. The new hub not only gives you a larger range of gears, but improves shifting and rolling efficiency, and even manages to shed some weight over the previous model.

The show will be wrapping up on Friday, but I'll be posting again on Saturday with some more gear.

I was able to grab a few photos of the bike, and it looks like Salsa gave this bike a ton of updates. They raised the head tube to give you a more upright position, made the top tube a little more horizontal for a classic appeal, added cantilever brake bossess, added a third set of bottle cage mounts, and moved from a straight blade fork to a raked fork. I'll give it a proper post next Saturday with some photos for you.

No word on a drop-bar option for the Alfine 11spd as of yet, so just the Rapidfire for now.

Your impression, pictures of the new Salsa Casseroll, also at the show?

Any word on whether Shimano is going to offer any other type of shifter besides the Rapidfire for the Alfine 11? I would really like a drop-bar option, but I would settle for a twist-shifter.