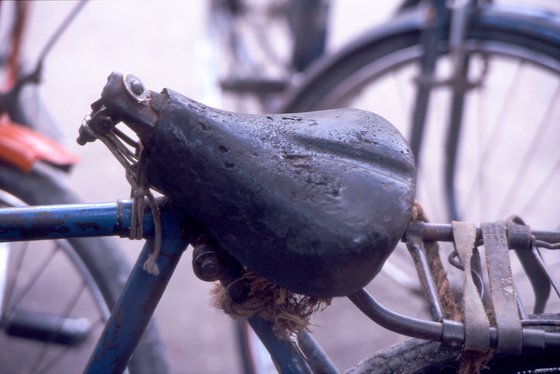 I'm forever hearing folks debate about which is the most comfortable seat on the market. Leather seats? Gel seats? Thin or fat? Seats with springs or seats with holes cut out in strategic places?

And the answer is? ... I'm not about to put myself in harm's way of that debate.

But I will nominate the saddle above as the most uncomfortable bike seat I've ever encountered. The bike was parked among several hundred other single speed bikes in downtown Havana.

Perhaps the seat post had been stolen, or maybe the bike frame was just too large for its owner. Anyway, the seat had been tied on the top tube with leather straps. The "saddle" material had been shellacked into a rock-hard glaze with some unidentifiable substance.

It wasn't an abandoned bike. The tires were pumped up. The bike appeared quite functional. But I just couldn't imagine the owner doing anything other than standing and pedaling.

Whenever I want to curse my own saddle for its failings (which usually are due to my not riding enough), I only have to picture the seat above ... and magically my own saddle feels like a lounge chair in a million-dollar mansion.

That rusty old seat looks like it was a great one long ago. Proper maintenance is the key with park tool set (http://tour-de-bike.com/bike-repair-stand-review) work like a pro.