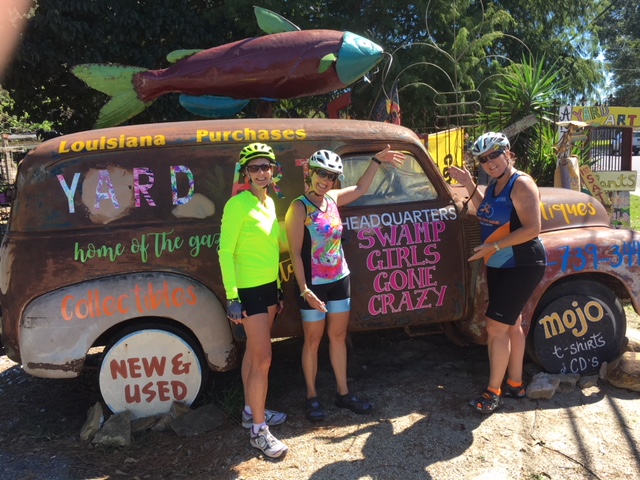 “Ginger” quickly became my nickname on the Ragin’ Cajun Country tour as a tribute to Gilligan’s Island and the high-maintenance, movie star who went on that “three-hour tour.” It did not take long for my fellow cyclists to recognize the withdrawal I was having from my makeup, jewelry, and hair products as I embarked on my first multi-day bike tour. What was I thinking when I signed up at the age of 61 to ride with 70 other camping and outdoor experts? I didn’t think — I just did it! 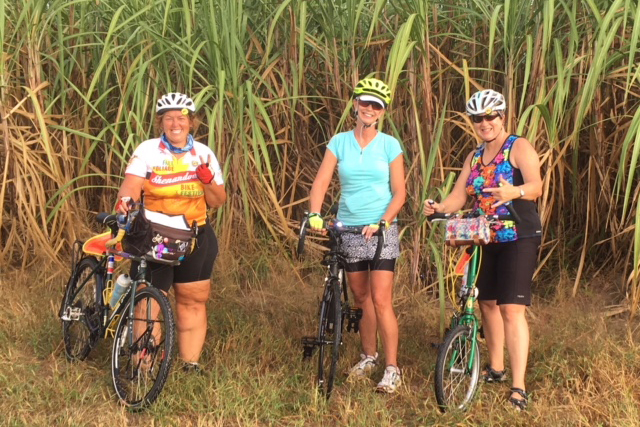 Camping was not an option for me, and that fit right into this fully supported Adventure Cycling guided tour as hotels were available each night (although there were a couple of hotels without a Keurig). Meals were catered and enjoyed outdoors (something I’m sure the real Ginger had to get used to), rest stops were well supplied, and there was plenty of sightseeing along the way. So why was I so nervous? I was afraid of failing and having to leave the tour early.

Encouragement from the staff, friends, and strangers kept me going and eased my fears once the tour was underway. Sunday was filled with food and music and festivals, and the cycling was just a means to get there. Monday’s 22 mph wind was a challenge, but we had all day to complete the 38-mile ride. I picked up the pace to make the hotel shuttle before dinner. Vanity was taking over, and I just felt the need to “dress for dinner” in jeans and a t-shirt instead of my cycling clothes.

Tuesday’s swamp tour was a chance to appreciate south Louisiana’s ecosystem and see the wildlife (not nightlife) native to that area. I was also getting used to eating a sandwich and holding a drink on my lap for lunch. Back at the hotel, even though there was no room service, there was a 24-hour drive-thru liquor store next door for our convenience. I wonder if they carried Dom Perignon? 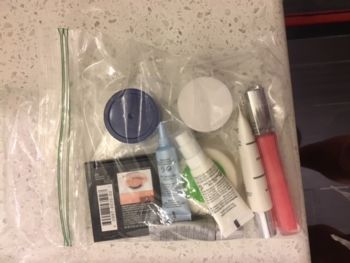 By Wednesday, I couldn’t even find what little makeup I brought in the duffle bag that was turned inside out because I was focused on finding more important items like sunscreen and chapstick. Overnighting in a cabin in Louisiana’s Chicot State Park presented me with the unique experience of sharing my snack bars, sunscreen, and sunglasses with the local raccoons. Apparently they have perfected the technique of opening a Velcro pack and helping themselves to everything inside. I recovered my sunglasses a few feet away and Ginger was unfazed.

Thursday was a long day of riding and sightseeing, and fatigue was starting to get the best of me. But being the Ginger that I am, I was excited to get to the hotel and “dress” for the last night’s celebration dinner complete with dancing. After a week in padded shorts, I felt beautiful in my t-shirt, Soybu skirt, and Skechers, a look I never would have worn before then.

Friday was mentally challenging because I realized I was close to accomplishing the unimaginable. It was not just the miles on the bike but also the laughter of new friendships, the art of dining outside, the elegance of a plastic cup of wine before dinner, the views of natural beauty, the dances on sawdust, and, mainly, the sense of accomplishment from overcoming the challenge of my very first bike tour.

Are you like Ginger? Have you ever toyed with the idea of a bike tour? Our fully supported tours are a great way to ease into touring and try it for the first time! 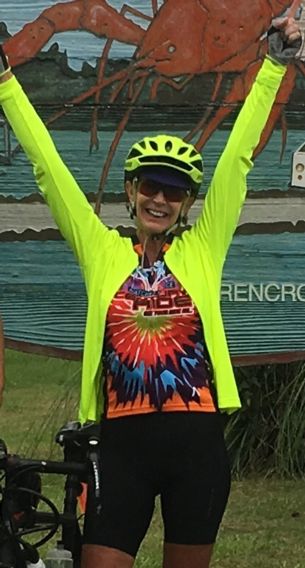 Oh Mina! I met you with Shawn and Arlen at the 40th Anniversary dinner, and I am so glad you had a wonderful time on this tour. I surely hope that this experience enables you to continue touring, as your "Ginger" alter ego explores new ways of having adventures. Thanks so much for sharing!