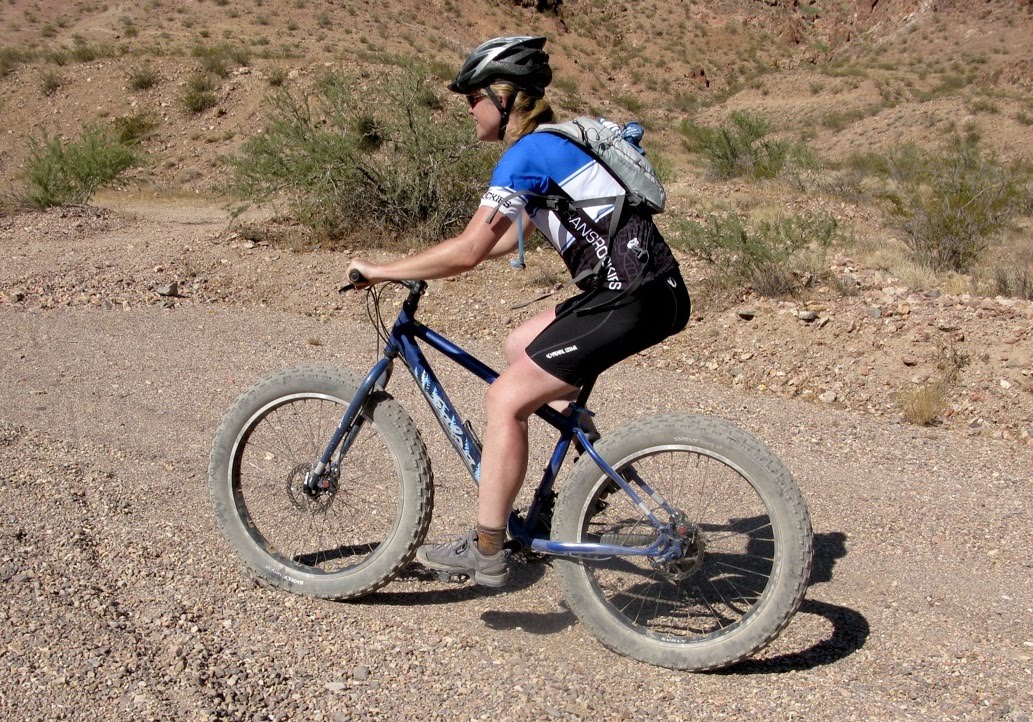 The Dirt Demo portion of Interbike's week long schedule wrapped up yesterday afternoon in Boulder City, NV. For the most part, the touring bikes were being reserved for the indoor show, but we were still able to find some cool stuff to share with you.

While riders were sweating out 90+ degree temperatures in the desert, you couldn't throw a rock without hitting someone aboard a snow bike ... and there were a lot of rocks to be thrown. Bicycle tourists have been slowly adopting the wide stance of 4-inch tires. While often referred to as snow bikes, they are ideal for any loose terrain, such as sand or deep gravel. The wide tire not only offers some added stability to your ride, but they also provide some suspension for an incredibly comfortable ride quality.

Along with plenty of Surly Puglsey bikes cruising around, Salsa had their brand new aluminum Mukluk available for test rides, which Jill Homer (deputy editor of Adventure Cyclist) took advantage of in the top photo. The Salsa Mukluk has done a good job of refining this style of bike by improving the steering to make it maneuver a little easier. The aluminum frame not only lightens up the bike, but also resists rust that you would be prone to in wet environments. Fatback Bikes, based out of Anchorage, Alaska, was out and about with some attractive titanium bikes of their own, boasting one of the most diverse selections of this bike style 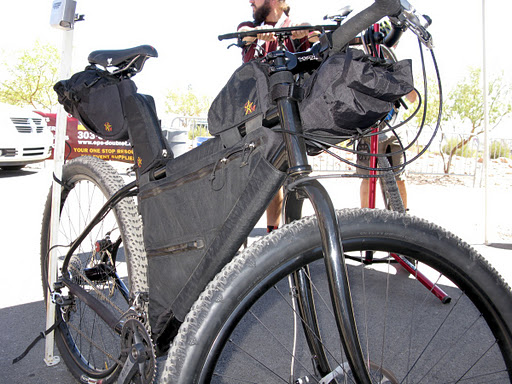 Another trend that is starting to pick up some steam is frame bags. This is a great setup for riders looking to travel on the lighter side. Carousel Design Works had a bike fully outfitted with a sampling of what they can do for you. With a full sized frame bag, handlebar bag, gas tank, and expandable seat bag, light touring doesn't mean minimalist touring. Ideal for off-road touring, this gives you a very compact configuration, which is handy for not only negotiating single track trails, but maneuvering your bike through congested cities. We ran into Salsa's general manager, Jason Boucher, who had his new Fargo lined out with a Revelate Designs frame and seat bag for a quick bike overnight trip between demo shows. Oh yeah, he also hinted towards an impending release of a new titanium Fargo and Vaya for 2011. 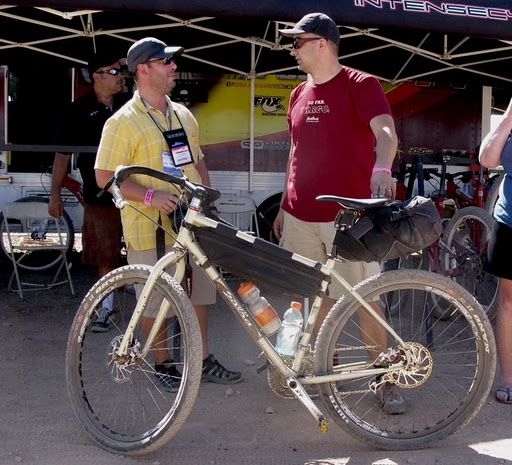 For the rest of the week we'll be inside the Sands Expo center at booth L30. If you're in the area, we really hope you can find the time to swing by and say hello. If not, look for some more Interbike posts later in the week.

I like the frame bag idea since anyone that has been out on a long bike trail with a break down can be left stranded without a tool kit. See some

FYI - "Gas tank" is a Revelate bag not Carousel...

CDW cashed my check in January, promising bags in April, and has not responded to emails or phone calls from me since then.

This comment is not intended as a flame at all, but I would hope you could direct your readers to a frame bag maker who does not play favorites with which orders he fills or ignores.

I am not signing my name simply because I imagine doing so would ensure I never receive my CDW bags.

Jeff is here at Interbike, and continues to run Carousel Design Works.

Have you actually heard from or seen Jeff Boatman since July? He's been MIA. Off the radar. Would love to know he's 1. OK and 2. still running Carousel and fulfilling customer orders.