Seville: Another City Embraces the Bicycle 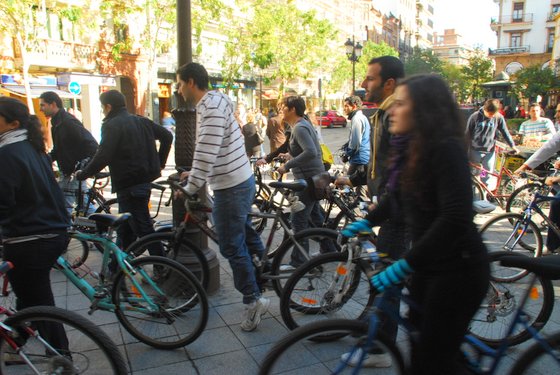 Last week it was the Algarve in Portugal. This week it was a jaw-dropping, grinning-from-ear-to-ear ride around Seville (Sevilla), Spain.

We only planned to bicycle to Seville to catch the train to Madrid after our 2 1/2 month pedal around Portugal. Little did we know that we were headed into one of the fastest growing "bicycle cities" on the planet.

In just a matter of a few years, Seville has gone from almost no one using a bike for transportation, to over 60,000 people biking per day.

It wasn't accomplished simply by an ad campaign. The city built and/or marked a network of 120 kms worth of traffic-separated bike paths around the city. These are not your average recreational paths that end abruptly, leaving the cyclist confused and lost. These paths are meant as a transportation system -- all connected, and, as we found, all easy to follow.

In addition, the city has provided a bicycle sharing system with 300 stations and over 3000 bikes (Their bike program is called Sevici). 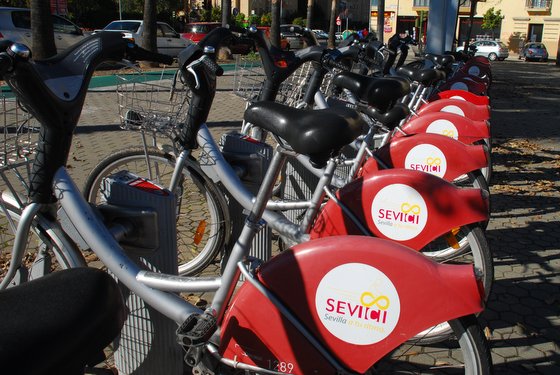 Kat and I were blown away with how efficient and easy the whole system operates. We barely had to refer to our bike map.

Thirty years ago, cities were best avoided on a bike tour. Now, thanks to bicycle advocates and campaigns around the world, more and more cities are becoming bicycle destinations themselves.

This coming year's Velocity Conference will be hosted in Seville, where advocates will gather to learn and share how to make the world a better place to pedal.

but, but, but I thought the only way to improve bicycling was to treat them as cars and make sure the riders followed the law of the road!!!! Separated systems don't work! I can't go as fast as I want and they never allow me to get where I need to go, its just for tourists!!! We need more education!!!

I look forward to following the continued progress!