November 2, 2017 - Karl Schlinger is a tour guide with china-by-bike.com 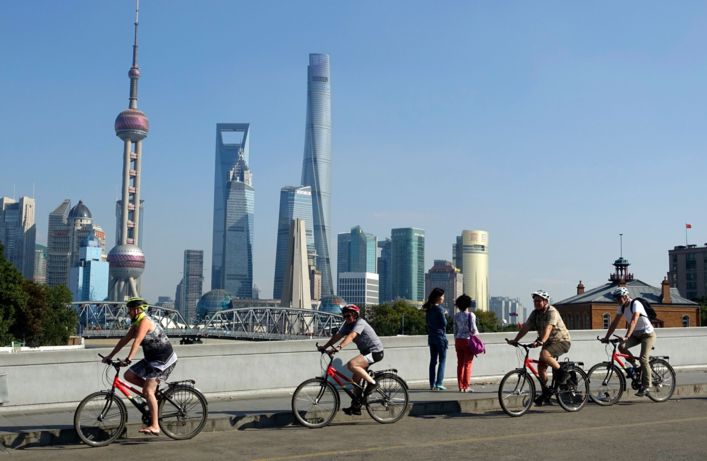 If you love to ride your bike through epic landscapes, China’s rich diversity of routes will satisfy. China is about the same size as the U.S. with diverse landscapes to the extreme. You could ride through the Gobi Desert in China’s northwest, climb some of the world’s highest mountains in the Himalaya region in the west, or cycle on the beaches of tropical Hainan in the southeast. The world’s third- and fourth-largest rivers, Yangzi and Yellow River, run through China, plowing through the high mountains in the west and irrigating the fertile plains of the eastern coast. In between these extremes, you can find a rich variety of destinations suited perfectly for cycling. Provinces such as Yunnan, Guangxi, and Shaanxi boast a great network of winding and low-traffic, sealed mountain roads that will make every cyclist’s heart jump with joy.

2 China is still a cycling nation

For a while, China’s reputation as the world’s greatest cycling nation seemed to be a thing of the past. Beijing’s nine million bicycles had been replaced by cars and electro scooters, and the Chinese new rich looked down on everyone who still pedaled to work or school.

However, in recent years the bicycle has made a remarkable comeback. As the wealth in the big cities stabilizes, the people’s focus is slowly shifting toward a better livelihood and green living. Millions of rental bikes now populate the wide bike lanes of the cities and the young Chinese have discovered road cycling and mountain biking as a great way to spend their free time outdoors.

If you head north from Beijing on your bike, you will meet numerous groups of young cyclists climbing up and rolling down the mountain roads along the Great Wall of China. Countless cycling clubs are flourishing all over the country and competitive road cycling events such as the Tour of China are gaining immense popularity. How long will it be until the Chinese start achieving good results in the world cycling scene?

3 The Chinese kitchen is perfect for cyclists

What could be better to prepare your body for a day’s ride through the Chinese hills than a steaming bowl of freshly made, hand-pulled noodles? The noodle soup is one of the most popular dishes of the Middle Kingdom. Literally, anywhere you pedal, a bowl of noodles is waiting for you. While the southern Chinese prefer rice noodles in all thinkable variations, flat, round, long, short, hot, cold, spicy, meaty, veggie, people north of the Yangzi prefer noodles made of wheat flour. The most famous types of pasta are Lanzhou’s hand-pulled noodles and the traditional dumplings, Jiaozi, filled with pork, beef, or various vegetables.

While the noodle soup is a perfect energizer, supper will be a great opportunity to enjoy some of the fresh and tasty Chinese stir-fry dishes. In a group of fellow cyclists, simply find one of the busy restaurants, order a good mixture of veg and meat dishes and a cold side dish, and share everything with your friends. The variety of dishes is endless — and everyone will find something matching their taste under guarantee.

Apart from nice roads, there are two more things that you need as a cyclist: food and a place to sleep. While it is rather uncommon to go camping in China, hotels and guest houses are always easy to find. In the bigger cities such as Beijing, Shanghai, and Guangzhou, prices for hotel rooms do not differ too much from European or U.S. standards. However, as a cyclist you want to explore the countryside more than the cities and you are therefore likely to spend your nights in less known places. A double in a reasonably nice hotel in a small place in China is not likely to cost much more than 200 RMB, around 30 dollars/euros, and could even be quite a bit cheaper if you opt for a little less comfort. 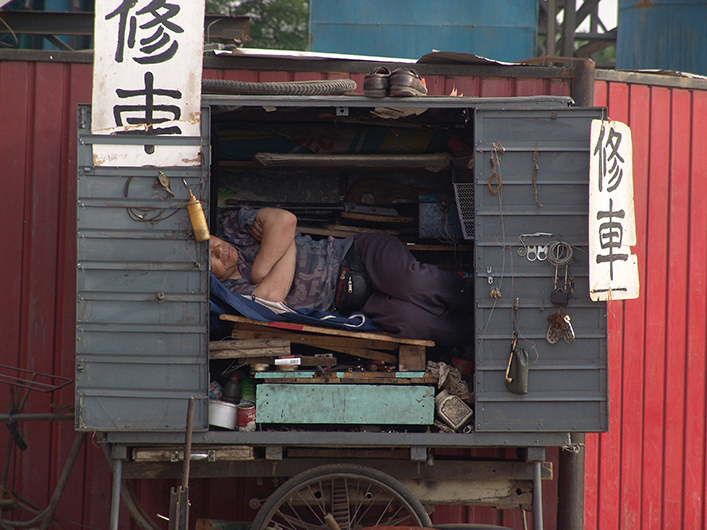 For food, there is no reason to worry about costs either. You can buy a Chinese breakfast, deep fried dough sticks, warm soy milk, steamed buns, rice congee, or a noodle soup, for as little as 5 RMB, 80 cents. Even dinner in a good restaurant will not cost much more than 70 RMB, 10 dollars/euros, per person, including the drinks!

5 People in China will love you

While Westerners have long become a common sight in the big Chinese cities, once you start riding through the countryside, you will start to feel the nosy looks of country residents on your skin. Most foreigners come to China to do business or study and are not very likely to end up in a small town. Be prepared! The Chinese, many of whom have not spoken to a foreigner before, will not hide their surprise to see a group of pale, “long-nosed” people cycle through their villages. It is common for a group of cyclists sitting in a little noodle joint to become the center of attention of the town or village. 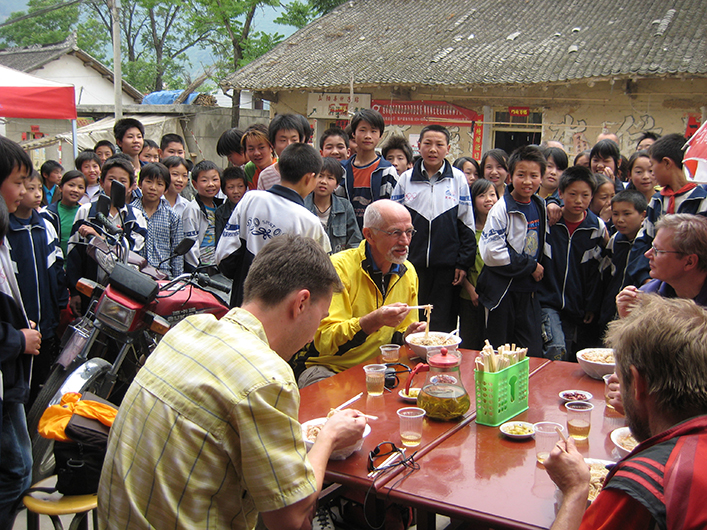 If you or your guide speak Chinese, it’s easy to engage in a conversation. But even if you don’t speak Mandarin, they will find somebody around who knows some English to act as an interpreter. They are going to ask you about the number of kids you have, your monthly salary, and the type of car you own. And, of course, there will be requests for group pictures and selfies — plenty of them! Make sure to calculate some extra time for farewell pictures when you are about to swing on your bike to move on.

6 China is a safe place!

Living in China, I have always felt safe. No matter what time of day, no matter where you travel, there is simply no reason to worry about safety. Even in places that look dodgy, you can still ask anyone for directions and they will tell you without hesitation. Apart from some stories of pickpockets in nightclubs, I have never heard about thefts in China.

On the contrary, I have left my backpack or even valuable things such as my Garmin GPS in restaurants and hotel rooms, and when I desperately came back looking for them, the owners of the place had found and locked them, waiting for me to come back and pick them up. During my career as a tour guide in China, there has not been a single occasion of bicycles or valuables being stolen or participants feeling unsafe.

7 Where else can you experience ancient culture, a traditional rural lifestyle, and ultra-modern city life on one trip?

China is a country of stark contrasts and a long (!) history. The differences between old and new, and modern and traditional life in the Middle Kingdom are bigger than in most other countries. You can climb the 400 year old Great Wall, visit the Terracotta warriors from the third century BC, and experience the buzz of a fully digitalized city on the same day.

Cycling through the country you will have the great opportunity to add even another layer to complete your picture of China. You will experience life in the Chinese countryside: farmers who use nothing more than their body force or an ox to plough their little fields, crops of corn, rice spread out on the road to dry, and women and men who pick tea leaves by hand in the beautiful mountains of southern China.

It seems like time stands still in parts of the country, but don’t get the wrong idea. The old and wrinkly farmer herding his sheep by the side of the road might suddenly reach into his pocket, grab his smart phone, and start a video chat with his wife at home!

Curious about cycling through China? Guest blogger Karl Schlinger is tour leader with the tour operator, China By Bike and would love to take you on a trip through the Middle Kingdom. Visit his site to learn all about the different trips through China and SouthEast Asia. 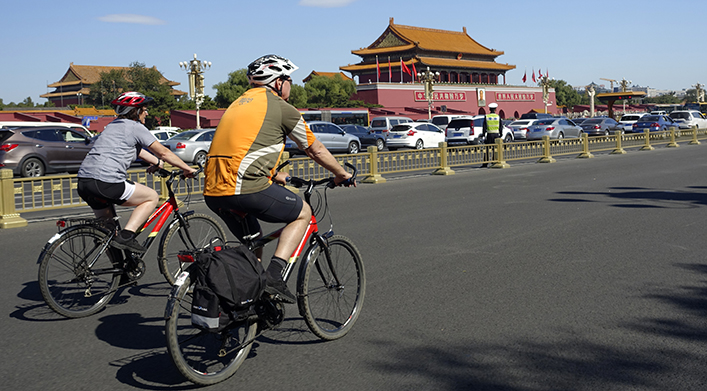