Scooters in the Bike Lane 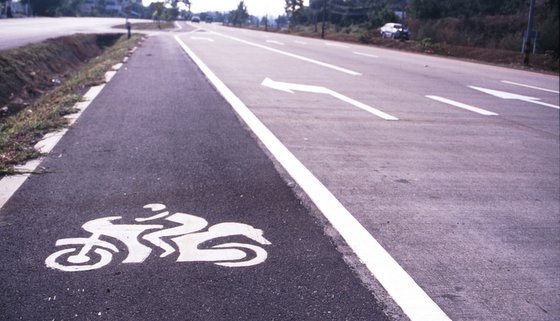 As we pedaled north out of Bangkok, Thailand, I remember chuckling when I realized the symbol in what I had assumed was the bike lane, represented a scooter. My thoughts ran the gamut from anger to sadness.

Was this some sort of joke by a rogue road crew?

It didn't take me long (and several more scooter symbols) to discount my practical joke theory. It made sense. Kat and I had rarely seen a bicycle in Bangkok and hadn't passed anyone pedaling on our chaotic ride out of the city. We HAD seen tens of thousands of scooters.

The sad truth is that while many countries are making progress on bringing back the bicycle as viable transportation, in many developing countries ... the trend is just the opposite. People are trading in their bicycle for a scooter and (when they can afford one) a car.

But the point I'd like to make about the above photo, is that it only takes governmental decision and a can of paint to turn your bicycle lane into a scooter lane. A walking/biking trail can be opened up to ATVs. And decades worth of bicycle advocacy can vanish.

Is that the question of an unrealistic dreamer? Maybe. But consider this -- the American Automobile Association has over 50 million members.

If you are a bicycle enthusiast or a Facebook fan, consider becoming a member of the Adventure Cycling Association. If you are already a member--thank you.

SO... put the scooter in its own lane, or have it drive with the cars. I ride in Northern CA.... and finding electric bikes, skate boards, roller skaters and electric/gas powered Razor-like skooters in my bike lane makes getting around even more of a challenge. A bike lane really ought to be a lane for things without motors. And skate-boarders weaving back and forth can make life difficult too.

I'm a huge cycle advocate and I agree with most of what you've said... however sometimes it's just not practical to ride your bike - i.e. to work, +50 miles, etc. Although, I do enjoy the business suit/cycling combo ;-) And in those cases a scooter is an excellent option. It's good to see moped scooters and bikes gaining popularity. No matter what it's a positive thing!