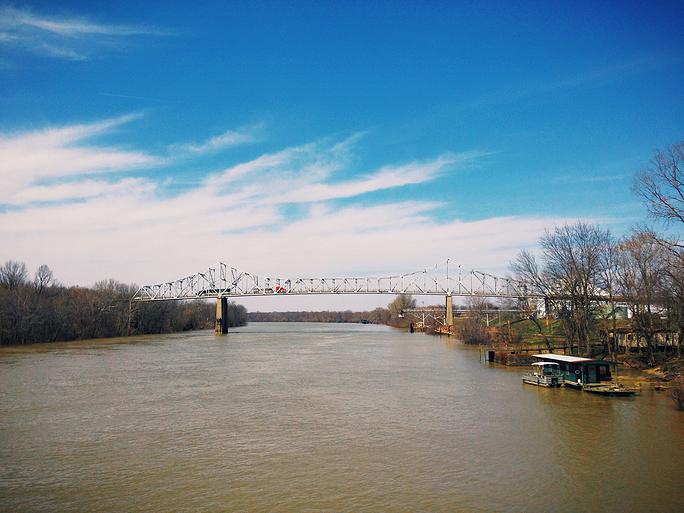 Deep in the Delta

In 1931, Big White River Bridge (BWRB) was built to span the breadth of the Big Woods of Arkansas, crossing at a narrow corridor in Monroe County, Arkansas. The bridge was placed at Clarendon, an old river town settled by French hunters and trappers in the late 1700s. Situated at the confluence of the Cache and the White Rivers, Clarendon got its first real start from its surrounding cotton farms and riverboat commerce. It is fair to say its story conjures visions of a Mark Twain tale.

The bridge was built to replace a ferry that operated for over 100 years at Clarendon. The road that the bridge tied together was built in the 1820s by an act of Congress for an “all weather road” between Memphis and Little Rock. At 3.5 miles, the double-cantilever steel-truss bridge is the longest of three sister bridges like it built in Arkansas. Today, only two of those bridges remain, both of which are slated for demolition.

Like these bridges, the people of the Arkansas Delta have seen more hopeful days. As with much of rural America, small town commerce and once thriving communities are drying up at an astonishing rate. The mechanization of the farm has led to fewer jobs every decade since the second World War, which has produced a dramatic population loss. To give you an idea of this decline, Monroe County had a population of 21,133 in 1940, by 1980, it had droped to 14,052 and by 2010 it's down to 8,149.

While so many are leaving the region, the rich natural resources of the area are not. In fact, the precious hardwood forests once drastically reduced are now being preserved and in many low-lying areas, replanted. Along with this shift in thinking, more and more Americans desire to get into the great outdoors. According to the National Park Service, ecotourism is one of the fastest growing sectors of the travel industry (Economic [and other] Benefits of Trails, Greenways and Open Spaces, Rory Robinson, NPS). This is good news for the Arkansas Delta.

In recent years, the AR Highway and Transportation Department began constructing a replacement bridge for the obsolete 1931 bridge. In the wake of planned demolition of the old bridge, a local movement began to save it for use as a pedestrian trail. Soon enough, activists realized the prime location of the bridge would make it more than just something the community could enjoy — the bridge was in perfect alignment and halfway between Memphis and Little Rock and its preservation would make an ideal and safe White River crossing for cyclists. It would also be the most innovative and user-friendly access into the Big Woods of Arkansas. 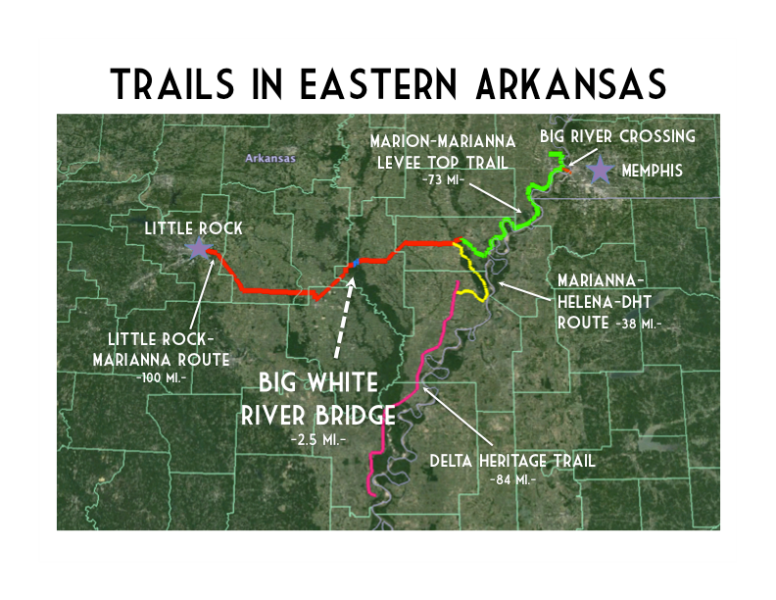 Currently, there are no designated cycling routes from Memphis to Little Rock, a 160-mile ride. However a few key pieces of infrastructure are currently being created to make this a great bike travel corridor.

At Memphis, the “Big River Crossing” is being built. An active Union Pacific Railroad dating from the early 20th century has an old “wagon way” cantilevered off to the side of it. Memphis visionaries have secured funding and construction has now begun to repave the unused roadway alongside the railroad. This will be the first pedestrian bridge over the Mighty Mississippi at Memphis.

The Big River Crossing will connect to 73 miles of paved levee-top trail, running from just north of West Memphis, AR, to Marianna, AR (southwest of Memphis). This project has also found funding and is expected, along with the Big River Crossing, to be completed in 2016 according to Big River Strategic Initiative, the group heading up both projects.

Travelers will follow the levee-top trail southwest out of West Memphis and make their way 40 miles further west on old delta Highway 79 to Clarendon. At Clarendon they’ll cross the old BWRB through the Cache River National Wildlife Refuge and continue on to Stuttgart, the “Rice and Duck” capital of the world. From there they will continue about 50 miles on U.S. Highway 165 to Little Rock, and complete their journey across the eastern half of the state, robust with scenery and culture, the birthplace of the blues.

Having proposed this route for part of U.S. Bike Route 80 through Arkansas, we are now in the process of identifying individuals to help coordinate the route.

Today, the Big White River Bridge lingers while the Highway Department works to complete its replacement bridge, scheduled to open in June of 2015. They plan to release demolition contracts on the old bridge soon after, which will ensure the end of the Big White River Bridge. We are working to postpone the demolition in order to take the needed steps to save the bridge.

When I was a child there was certainly a lot of talk about constructing a new bridge. It took just over a decade to commence construction. During all that talk my dad, Burton, and a few others became interested in preserving the old historic bridge. My Dad took the lead and met with congressmen, U.S. senators, legislators and even some of President Clinton’s staff, always trying to get politicians to take an interest and save the bridge. Years of work and research went into the first preservation effort for the bridge, however the campaign eventually petered out after no political help was gained. Clarendon and the community grew weary, seeing no way to save the old bridge on their own.

Folks in town worried that owning the bridge would make the already struggling community go completely belly up. The fear of becoming saddled with a decaying monolith and a lack of resources killed all hope and ambition of saving the bridge.

When the chance came for the City Fathers and Mothers (of that time) to agree to keep or not to keep the bridge (the Highway Department has a policy of offering old bridges to a local owner pro bono, if they want them), they turned it down. The Highway Department began making plans to tear the old bridge down and made an agreement with the Cache River National Wildlife Refuge to give back the old right-of-way and replant hardwoods in order to make the new bridge compatible and appropriate for Refuge standards.

Before that agreement was made, the only plausible reason to leave the bridge was for historic preservation. Trails and cycling had not yet come into focus and the thought of using the bridge as part of a cross-country bike route was unheard of. The societal shift toward the outdoors that would bring economic hope for rural communities like the Delta had not yet happened in Arkansas. That shift has now occurred; people want to get outside on bicycles and trails, and both large and small communities are economically benefiting because of it.

This post was written by Johnny Moore, a volunteer working to save the Big White River Bridge. To learn more, volunteer, or donate to the cause, visit www.bigwhiteriverbridge.org.

Photos and map by Johnny Moore.

Please save the bridge , now that The Mighty Miss. is complete it would be a shame to lose it and the hopes of a good ride will be lost. Think about how they fought for KATY trail Steve

Great Idea! We need to save the Bridge.

I want to ride over this bridge!!! This is a must save. Take a look at the old railroad bridge over the Mighty Hudson in Poughkeepsie New York that was repurposed to a connect trails on both sides of the Hudson. Fantastic!