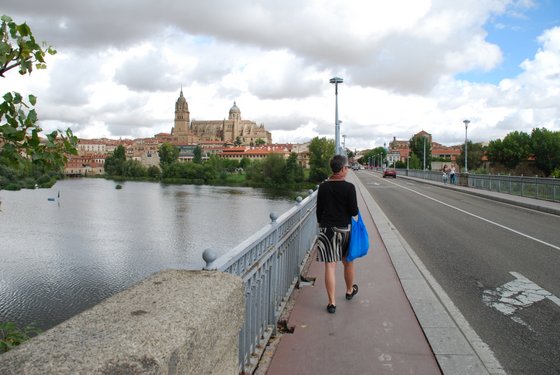 Salamanca rises out of the high Spanish plains like a dream. We pedaled across one of the many stone bridges into the city center. The narrow streets are a maze, winding their way amongst architectural wonders. Towering cathedrals, plazas, fountains, parks, and a grand university founded in 1218.

The downtown hostels were full, but we found a room only a ten minute walk away.

Later that evening we walked back to the city center. Salamanca has several pedestrian boulevards -- a people watcher's paradise. Families out for a stroll, shoppers, groups of teenagers, tourists from every corner of the world. And there are always old men in suit jackets and caps sitting on benches watching the world go by. I'm gong to be one of those old men some day.

We were walking down one of the side streets and I could see the boulevard below us. Streams of humanity. But something caught my eye. It was a kid, alone, in the middle of the boulevard, sitting stone still. He was gazing up at something. As we got closer, I realized that there was music playing. A violinist. But the musician was around the corner, so I couldn't see him.

I only saw the kid's face. He wasn't amused or entertained … he was transfixed. I was closer now and grabbed my camera to take his photo. He didn't see me. I was invisible. The music had erased everything else from his view. 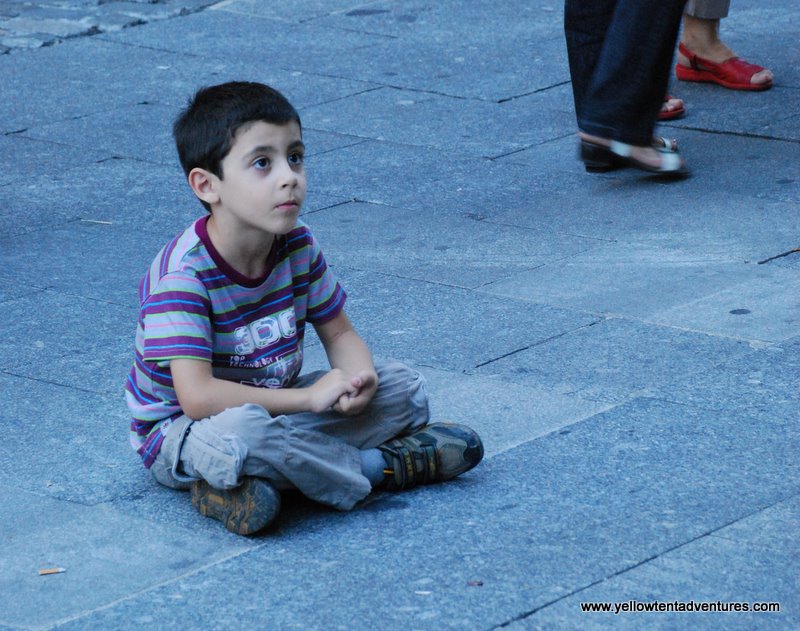 It was now my turn to be entranced. I was experiencing this music through the mirror of this child's eyes. It was moving, unsettling, and wonderful all at the same time.

I finally peeked around the corner and saw the violinist. A tall young man with in blue jeans, sandals and a checkered shirt. His dog was lying on a blanket at his feet. 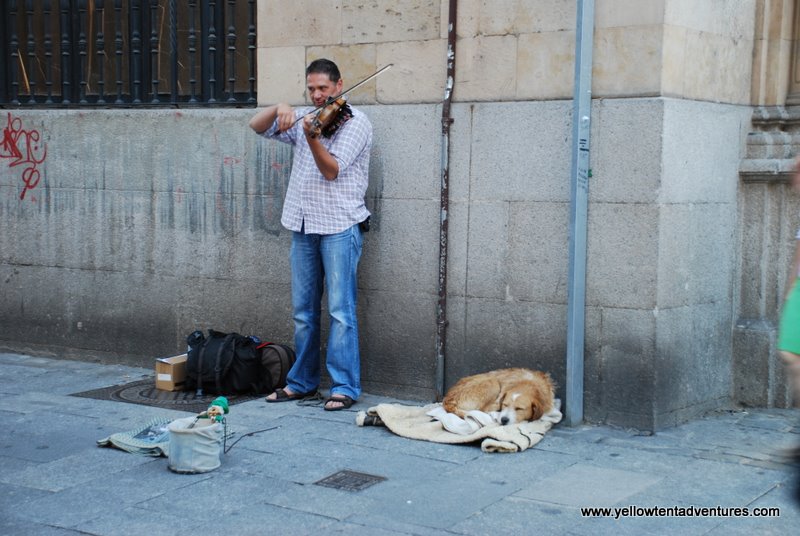 The violinist finished the piece and I watched as the young kid's father, who had been standing several feet behind his son, bent down and grabbed his hand and they walked away. The little boy stole a few more glances back at the musician before the crowd swallowed them up.

The more I travel, the more I understand how valuable the little discoveries and experiences are. They are travel's essence.

Some day in the future, when I AM one of those old men, sitting on a bench with my cane, watching the world go by … and all of cathedrals and monuments I've seen have blended together into a fog of memory. one vivid memory that will remain from Salamanca … the violinist ...and his dog … and that kid.

Salamanca is a magical place indeed. The streets, more than a place for cars, is a space meant to walk and loose oneself in the sea of people. I lived there as an exchange student and it was one of the most memorable experiences I've had.