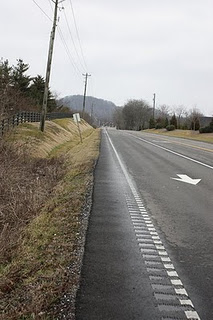 Could things be looking up for bicyclists on rumble strips?

Last month, I wrote that the Federal Highway Administration (FHWA) had issued an important new technical advisory (TA) on rumble strips for the first time in 10 years. From a bicyclist's perspective, it was a disaster -- and I write this as someone who fully understands that rumble strips can be effective safety devices, when properly used. However, the new TA encouraged the irresponsible and even dangerous use of rumbles on a number of secondary and country roads that are important for traveling and recreational cyclists.

With our partners, the League of American Bicyclists and the Alliance for Biking and Walking, we have worked very hard over the last few months to change the TA and develop a much better federal guidance on rumbles. We started with detailed analyses of the deficiencies in the new TA (encapsulated in this pdf document) and have held lengthy meetings with FHWA's director of safety and technology, Michael Griffith, plus many of his staff and also officials at the U.S. Department of Transportation.

At our most recent meeting, we were pleasantly surprised by what we heard. Rather than stonewall us, Mr. Griffith and his staff walked through our litany of concerns, in detail, and acknowledged that they could do better. They shared with us many specific and extensive changes to the TA that they are now considering and hope to move on in the next couple of months. In particular, they are working to improve the language as it relates to the needs of bicyclists and other non-automotive road users, and also the guidance on effective public participation before rumbles are applied. Also, as a good faith measure, FHWA has suspended webinars that it was going to conduct on the new TA until the language is redone.

The League, the Alliance, and Adventure Cycling are continuing to press for positive change, and we will continue to keep you posted on FHWA's response. In the meantime, what can we all do? Stay vigilant. Keep an eye on any expected road re-pavings in your area and make sure they do not destroy a good riding road with a poorly applied or unnecessary rumble strip. If your state or local agency invokes the new federal advisory, let them know that FHWA is reconsidering the language and may change it in the near future. If you need help, contact Ginny Sullivan (Adventure Cycling's special projects director) with your concern. Also, Ginny is continuing to collect images of bad and good rumble strips, so please send your photos our way; you can reach Ginny at 800-755-2453 (BIKE) x229 or gsullivanATadventurecyclingDOTorg. By the way, if you'd like further background on rumble strips (good, bad and ugly), you can access this excellent report (pdf) from the League or this matrix of current state practices (pdf) from Adventure Cycling.

Thanks for your interest and we'll be in touch.

Photo Caption: Cyclist Will Selser rides in the travel lane on US Highway 89 in Montana in order to avoid rumble strips on the shoulder. Photo by Bill Schneider.

I agree with Mr. Allen's comments. Last Fall, my wife and I rode US 71 south of Fort Smith, Arkansas as part of a multi-state tour. Much of that highway has a very narrow shoulder (that varies in width from roughly 2 feet to nothing). Where there is a shoulder, it has a rumble strip that is often in middle to the already-inadequate shoulder. Riding on it was a horrible, scary experience due to the poor quality of the shoulder and compounded by the placement of the rumble strip.

First of all: the rumble strip in the image at the top of this posting, a few inches to the left of a steep dirt drop-off, is a travesty. There is no point in having a rumble strip at all unless there is a recovery area to its right. Yet such rumble strips continue to be installed.

But also, any dogmatic, one-size-fits-all statement is bound to be wrong at least some of the time, as is Beery's. Bicyclists do well to ride on the shoulder under some conditions, and also will need to merge back and forth between the shoulder and the travel lane even when the preferred lane position is on the roadway (for example, when entering or leaving the roadway).

Guidelines for appropriate rumble strip installation (minimal cut depth, at least 4' wide recovery area/shoulder, and gaps so bicyclists can cross to and from the roadway on smooth pavement) have existed for years -- see for example, this paper:

I would submit that when a suitable recovery area exists, it often is preferable to the travel lane for bicyclists to ride on. One typical use is on Interstate highways where the bicyclist's alternative is the several-foot-wide shoulder to the right of the rumble strip, paved to the same standard as the travel lanes, or a travel lane with 70 mph traffic to its left. Problems occur when the guidelines are ignored, as they frequently are. Here's another example, from Massachusetts, my home state. I'm pleased to report that it was later corrected.

I do have another concern about rumble strip cuts which I haven't seen expressed elsewhere: they catch water, and in freezing weather this turns to ice. It isn't only slippery: as it expands, it could break up the pavement. I wonder whether any research has looked into this.

We shouldn't be cycling where rumble strips are applied (outside of the lane) anyway - it's too dangerous. The LAB (whose cycling courses stress staying visible on the road) should appreciate this even if many cycling advocates do not. Making roadside shoulders fit to use for cycling is not a positive step in this cyclist's opinion. A bicycle is a road vehicle, and we all lose if we get pushed out of the travel lanes.

Yes. To be safe, ride in the lane, not on the shoulder.