The following is a guest post from Ruthie Knox:

I’m probably not the only member who likes to skim through the Companions Wanted page in Adventure Cyclist magazine just for fun. There’s a people-watching sort of pleasure to reading over all the short, descriptive ads that members place for riding companions and thinking about who these people are, where they’re going, and what kind of companions they might attract.

However, I probably am the only member who’s ever read the Companions Wanted page and thought, “This would make a great set-up for a romance novel.” 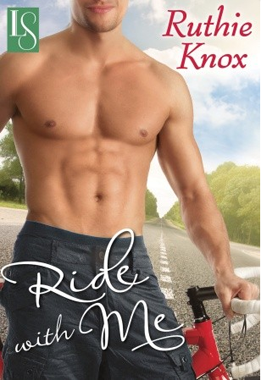 Late in 2010, I started dabbling with writing romance and within a few months I was seeing romance novel premises everywhere—Adventure Cyclist magazine was no exception. How cool would it be, I thought, to write a book where the hero and heroine met through Companions Wanted and then rode across the country together? What if the heroine was expecting a sort of typical middle-aged married male rider, and instead she got somebody too young, too good-looking, and way too grumpy to suit her? What if they hated each other but were stuck together for a 4,200-mile trip on the TransAmerica Bicycle Trail

Well, I had to find out. So I wrote the book. Ride with Me is the result: a romance novel set on the TransAm with an odd-couple hero and heroine who ride together all the way from Oregon to Virginia.

I tried to do justice to both the romance and the cycling. I’m a big fan of both - I've been a romance reader since high school, and a cyclist for even longer. I’ve never crossed the TransAm myself, but I’ve done four guided trips with Adventure Cycling - Cycle Utah, Cycle Montana, Cycle the Divide Colorado, and Cycle the Divide Montana - as well as a self-guided tour of the Green Mountains Loop in Vermont using Adventure Cycling maps. My father also rode most of the Southern Tier back in the late Eighties and early Nineties. So I had plenty of touring experience to draw from as I imagined the journey I wanted my characters to take. 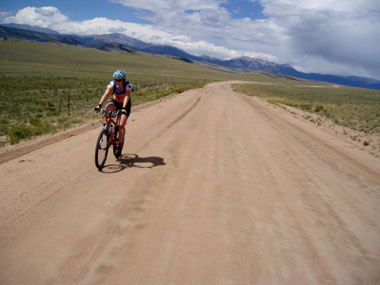 It was a lot of fun to craft the characters and to characterize them in a variety of ways through their decisions as cyclists. My heroine, Lexie, is the kind of rider whose handlebars sport a bike computer, an air horn to scare off dogs, and a map pouch complete with annotated map. The reflective triangle hanging off her saddle reads “Lexie -- TransAm -- OR to VA,” which the hero, Tom, thinks may as well read “Hi! I enjoy talking to strangers about riding my bike! Please drop whatever you’re doing to engage me in inane conversation.” Lexie believes in training and planning. She’s ready to have the adventure of a lifetime.

Lexie is not remotely Tom’s cup of tea. He’s a bike mechanic who takes off to ride in the summers - preferably alone, and preferably without having to answer anybody’s irritating questions about why he’d want to ride his bike across the country. Tom’s the sort of guy who rides a beat-up, steel-frame warhorse, doesn’t see the point of bike shorts, and believes it’s never a good idea to pass up a chance to take in the local attractions. He’s ridden in Death Valley and the Australian Outback. He doesn’t need to ride with Lexie, and he doesn’t want to, but his sister ropes him into it, and he finds himself reluctantly enjoying Lexie’s company before they’ve even made it out of Oregon.

Quite a bit of my “research” consisted of drawing from my own experiences on the road, but I also made use of the Ride Registry Journals on the Adventure Cycling website, which are full of interesting observations and descriptions of the TransAm. When I needed help imagining the Idaho landscape or figuring out what riding conditions would be like for my characters in Missouri, I turned to the ride journals and I was never disappointed.

I wanted the story I told in Ride with Me to be not just accurate, but apt -- suited to the trail and the epic journey it offers across the United States. I wanted to convey something about my own experiences with adventure travel through this story, to capture a sense of the full emotional range of a trip like the TransAm: the inconvenience, the frustration, the countless irritations and disasters, but also the triumphs, the beauty, and the unexpected moments of transcendence. I put my characters through hell on the trail, but the adventure makes them stronger. They find love, of course - it is a romance novel -- but they also find their way to a better, more mature understanding of themselves and their places in the world.

This is, after all, the spirit of Adventure Cycling, at least as I understand it -- this hope that all the flat tires and freak thunderstorms and 13 percent grades will be accompanied by exciting new experiences and the kind of personal growth that only comes after you’ve emerged on the other side of challenges, the exact nature and scope of which, you could never have anticipated.

Photo of Ruthie on the TransAm and cover image of Ride With Me courtesy of Ruthie Knox.

RUTHIE KNOX graduated from Grinnell College as an English and history double major, and went on to earn a Ph.D. in modern British history that she’s put to remarkably little use. An earlier incarnation of Ride with Me won the 2011 Maggies Award for best contemporary series romance, as well as the 2011 Romance Junkies/Carina Press contest.

Ride with Me is available from Random House’s Loveswept imprint today!

got it for my NOOK, should be a good read while camping this weekend.

I bought one for my iphone, looking forward to reading it! Eva from Sweden