Last Friday, six Amtrak passengers waited at Union Station in Pittsburgh in the early morning darkness to catch the Capitol Limited train with bikes in hand. They were demoing Amtrak's new, but not yet publicly available, bicycle roll-on service which has been eagerly awaited by cyclists around the country. The Capitol Limited parallels two popular bicycle trails—the Chesapeake & Ohio Canal Towpath and the Great Allegheny Passage—for 350 miles of traffic-free cycling. 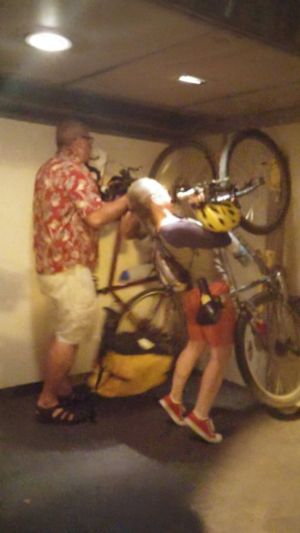 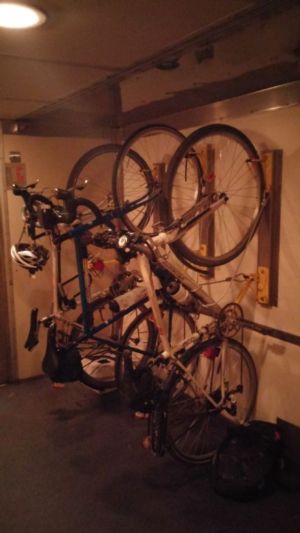 When the train arrived, the passengers rolled their bikes into a car with seven bike racks, hooked their bikes on the wall, and secured them with velcro.  There will be eight bike racks total once the service is launched. 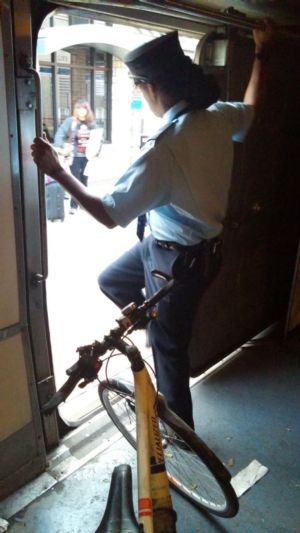 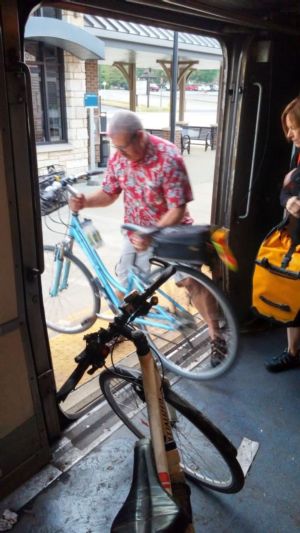 Ninety-five minutes later, the train pulled up to the Amtrak station in Connellsville, where the conductor alerted the cyclists, giving them time to get their bikes ready to roll off the train. 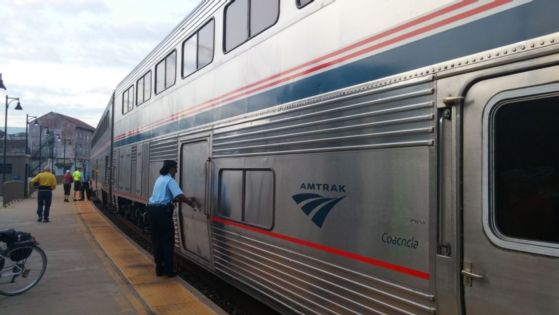 The feedback from the roll-on demo was very positive, and all participants were very excited about upcoming launch of the service. Participant Ed Quigley remarked, "All the Amtrak personnel were helpful and positive, and it was a wonderful experience. This is going to be such a boost for the local economy, the trail towns, and cycling. And Amtrak passengers!"

The new roll-on service is anticipated to be open to the public within the next two weeks and will allow passengers to roll their bicycles on and off the train at any station along the route—without having to box their bikes.

Amtrak partnered with Adventure Cycling one and a half years ago to form an advisory Bicycle Task Force to work on developing the service and addressing challenges. Amtrak will charge $25 for the fee and cyclists will need to reserve a space for their bike when buying their ticket online.

There is talk about the Empire Builder but nothing concrete yet. One of the goals of this project is to find ways to implement roll-on service across the Amtrak fleet. So lessons learned will serve to create more access on other lines. Stay tuned!

Now, if we could get this service implemented on Amtrak Empire Builder. I live 2 blocks from a station on that line but it's 150 miles from the nearest station that accepts checked baggage (boxed bicycles). There are numerous rail trails in Wisconsin, Minnesota, Washington, and Oregon plus Glacier National Park that are on or just a few hours bike ride from stations served on the Emprie Builder.

That's great news, sounds like progress. Now the service needs to spread to other routes. Just finished a self supported ride from Dayton, Ohio to New York City and came back via Amtrak's Cardinal Route, getting off in Cincinnati. It would have been great to roll the bike off intact, wait for the sun to come up, and ridden the last 60 miles or so home.

This is not only great news for cyclist, but for the towns along the way. I can't wait to try this myself.

$25 why so much other roll on service are free or as much as $10 on other routes.

After feedback from the cycling community, Amtrak decided to lower the fee to $20.

Paul WTF drop the attitude, I was just asking why so much.

I did not know about the subsidizes thanks for the info

This is great, but if you are coming from DC you arrive in Pitts at midnight. Can you stay in the station until the morning when it is light enough to bike?

The station is open 24 hours; and I doubt the agent would kick you out. We've waited until dawn several times when arriving from Chicago at 5:03AM.

Will the roll on service accommodate Bob trailers ?

Bob trailers will probably need to be pulled off the bike and stored with the luggage, just like panniers but a nice conductor may allow them to remain with the bikes.

That would be huge if they do! They should let us store everything in the room including trailers and panniers.