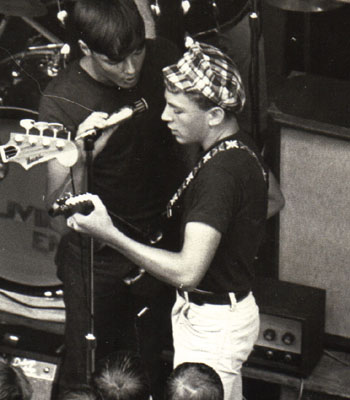 Author's note: This piece originally appeared as two separate posts, which have been combined here for the sake of continuity. Here's part one:

Two of my favorite topics are 1) bicycling and 2) rock 'n' roll music (going all the way back to the '50s). That's why I'm making it a personal mission to compile a list of rock 'n' roll songs that delve into the subject of bicycling. But I need some help, because so far my list is woefully short.

There is, of course, Queen's over-engineered and overly dramatic (IMHO) 1978 anthem "Bicycle Race." Another well-known one is the title track off Livingston Taylor's album Bicycle. It's a little closer to jazz-folk than rock, but I'll include it anyway. Then there's "Bike," a really bad song (again, IMHO) on Pink Floyd's 1967 debut album, The Piper at the Gates of Dawn.

And this just in: A Canadian band named Sloan on November 23 released its new digital EP album called Hit & Run. The title is based on an experience band member Chris Murphy had last summer, when he was struck by a car while riding his bicycle. I'm not sure any of the five songs on the EP are cycling-related, but I'll include this one on my list, too.

Other than that ... help me out here. There have to be songs I'm not thinking of.

Meanwhile, maybe I'll compose my own bike-rock song. I already have a title — "RAGBRAI Rag." Now all I need is lyrics and a melody.

Reader response to my "Rock the Bike" blog last week was off the charts, so before the excitement dwindles I'll tabulate the new list here (in no particular order). Some of these came in on Facebook; others via the Adventure Cycling blog — so, chances are you haven't seen the entire list yet:

"Bicycle Race" by Queen
"Bicycle" by Livingston Taylor
"Bike" by Pink Floyd
Hit & Run (album name) by Sloan
"Brand New Key" by Melanie
"Broken Bicycles" by Tom Waits
"Blue Bicycle" by Brad Hoshaw
"My White Bicycle" by Nazareth (also by the Nuggets)
"Bicycle Song" by the Red Hot Chili Peppers
"My New Bicycle" by the Roches
"I'd Like That" by XTC
"Rockin' Bicycle (built for two)" by Fats Domino
"The Idiot on the Bike" by Aveo
"The Bicycle Song" by David Rovics (holy cow, I just noticed Rovics has his own Rock 'n' Bike playlist posted on his homepage ... my work is just beginning!)

There were a couple of other songs mentioned, but they were stretches. And then there were these comments:

"Also [Bruce] Springsteen's 'Hungry Heart': 'I went out for a ride and I never came back.' Out for a ride ... on his Surly Long Haul Trucker, Baby."

"I personally always convert the lyrics to the Arlo Guthrie's 'Motorcycle Song': 'I don't want a pickle, I just want to ride on my biiiii-cicle.'" (I love this song.)

The list will continue to grow. But I promise not to report back on the matter until I have at least 100 titles in hand.

"Me and My Gang" Rascal Flatts.

Not rock and probably not intended as a bike song, but I think the refrain, "We live to ride, We ride to live." qualifies it.

Not intended as a bike song, but how about George Harrison's The Ballad of Sir Frankie Crisp, known by the refrain, "let it roll."

Might not classify under "rock', but IMHO they all rock.

"Idiot on the Bike" by Aveo