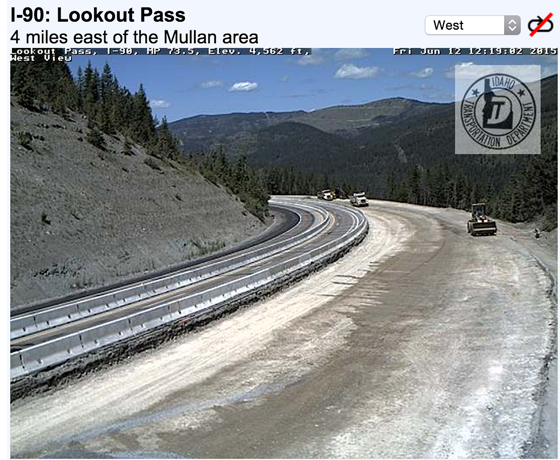 Image from Idaho Transportation Department webcam at Lookout Pass on I-90, westbound.

Cycling season is construction season for highway departments. Now is the time to check Department of Transportation (DOT) websites for construction projects in the states on your intended route.

Cyclists advised to avoid Lookout Pass on I-90 in Idaho

The Idaho Transportation Department (ITD) recently alerted us to an extensive project happening on I-90 from Mullan to Lookout Pass. While we don’t have a route in our network that uses this stretch of I-90, we suspect many cyclists use it between Spokane, WA or Coeur d’Alene, ID and Missoula, MT.

From Don Davis, of ITD: “The highway is being rebuilt and it's down to two travel lanes. The westbound lane is between two runs of concrete barriers with a usable lane width of fifteen feet so not much comfort or safety for touring cyclists when a westbound truck is passing them. We advise cyclists not to use I-90 over Lookout but choose another route. I-90 between Mullan and the Montana line will be down to two lanes through October then back to four lanes until mid-April. At that time, the highway will be back to two lanes while the other half of the highway will be rebuilt. The project is expected to be completed by October 2016.”

However, for cyclists intent on riding over Lookout Pass, to keep cyclists safe, a shuttle is offered through this construction zone. Cyclists will encounter the sign below at either end of the project, westbound at the Montana/Idaho state line and eastbound at Mullan exit #67. For fastest response, cyclists should plan to reach these locations during daylight hours. 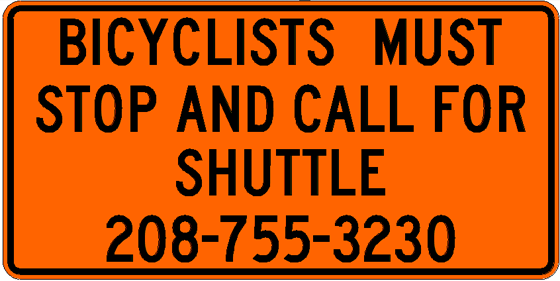 For cyclists not wanting to deal with this construction at all, or who anticipate they will arrive outside of the preferred shuttle times, we have a suggestion for an alternative route:  download the Sandpoint to Missoula pdf file here. This previously created map aids bicycle travelers in making the connection between Missoula and the Northern Tier Route through Sandpoint, ID. Cyclists can easily reach Sandpoint from Coeur d’Alene via U.S. 95.

Because this is not in our route network, we have limited ability to reach cyclists who might be planning to use this routing. In order to get the information to as many cyclists as we can, we have worked with Warm Showers to alert hosts in Spokane, Coeur d'Alene and Missoula so they may pass it along to their guests.

We want to extend a great big thank you to the staff at ITD working on this project. It is not often we hear of such excellent accommodation of cyclists on road construction projects.

Check for construction projects along your route

This situation also serves as a reminder to all traveling cyclists to check the Department of Transportation (DOT) website for the states you are traveling through for alerts to major construction projects.

These DOT sites usually have good status reports you can use to stay abreast of these types of projects. You can find links to each state DOT through the Federal Highway Administration website. Once you arrive at a state DOT website, look for Traveler Information or a link to their 5-1-1 page. If a state is using the 5-1-1 system, you can also access it by dialing 511 from any phone.

In most cases an official detour will be available but occasionally it is better to go off route sooner for better cycling conditions. Where you need or wish to create your own detour, we suggest visiting the individual state bicycle information pages to determine a route. A list of resources for each state is available from the Pedestrian and Bicycle Information Center.

While we don’t have the resources to keep up on every project in motion out there, we report impacts on our routes as we learn about them to the Temporary ACA Route Closures discussion on our Forums and in our @acaroutes Twitter feed. You are invited to report your experiences and information in both of these places as well.

Another paved alternate to look at is crossing the MT/ID border at Thompson Pass.It would involve taking Coeur D lene River road, Forest Highway 9 northeast from Enaville. About 21 miles later, turn right and Prichard Creek Road. The road becomes MT 471 at the top of Thompson Pass. The road reaches MT 200 just west of Thompson Falls. As for the Northern PacificTrail, if your bike can handle the Route of the Hiawatha Trail, your bike can handle this trail.

Thanks for chiming in with another alternative, Greg!

For cyclists with wider and sturdier tires, the NorPac Trail is also an option to avoid the construction. A map can be found here:

A cyclist who used it sent us an email saying the following:

"The trick is to get off I-90 at the Taft exit, get on the Northern Pacific Rail Trail, take that over the pass and on to NF-8008, a jeep road that takes you into Mullan, where you can connect with the Trail of The Coeur d'Alenes. The NorPac trail and the jeep road are unpaved, but smooth enough for most bikes."

We didn't include it as an option in the email because our impression of the surface was that wider tires would be advisable (minimum of 1.25").

Thanks for that info, Jennifer! I wish I knew that back in 2011. I remember debating whether to take the trail or go I-90. The problem was back then the info on that trail was hazy to non-existent, including online. When I asked the couple of bike shops on the CDA Trail, they didn't have much info to offer. And what info I did hear from the locals ran the gamut: Either the trail was going to be totally rideable and passable, or it would be railroad ballast and downed trees. So we opted for I-90, which wasn't bad on the Idaho side. And once we got beyond the first couple miles in Montana, it was fine.

As for the 1.25" tires, that translates into 32 mm, which is a width that a lot of bike tourists ride these days.

I rode Lookout Pass/I-90 to get between Spokane and Missoula in 2011. Riding the Idaho part wasn't too bad, however the first few miles of descent in Montana was horrible, a very deteriorated shoulder. I hope Montana's repaved that since then!