Riding the Idaho Trail of the Coeur d'Alenes

For my bike respite this year I recruited my friend Elisabeth to join me on an Adventure Cycling tour. We had such a great time in Colorado last year it only seemed natural. We chose Idaho Relaxed based on the mileages, number of days, dates, and scenic locale. An added plus was that it was within driving distance for both of us making logistics a breeze.

Last year we earned the moniker, Ladies Who Linger, and this year we wanted to prove that it wasn't a fluke. The following pictures detail some of the highlights of our trip riding the Trail of the Coeur d'Alenes. 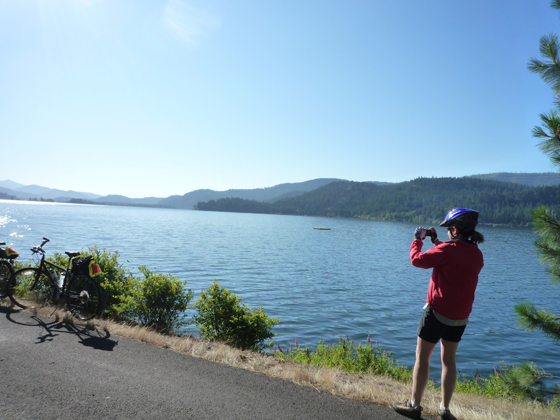 This is a prime example of what Ladies Who Linger do on tour: snap pictures of scenic views. 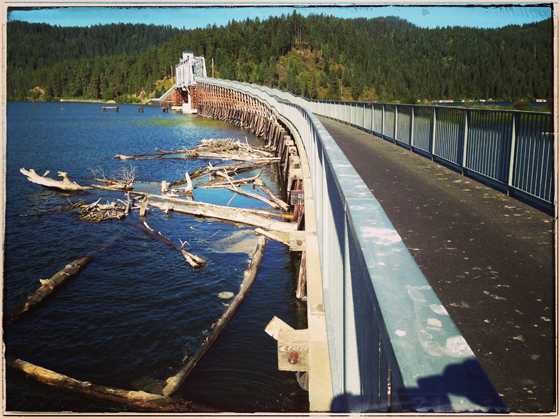 Though the first day was long-ish in miles (42.5), it also delivered the first thrills. The Chatcolet Bridge spans Coeur d'Alene Lake with unique stair-stepped ramps in the center (visible in the waviness of this photo). 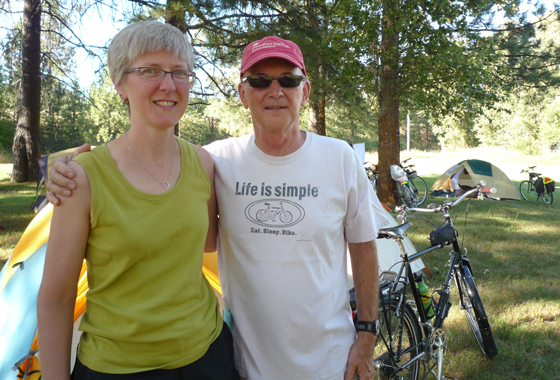 On the second overnight, I was surprised by a visit from long time supporter and route researcher Dallas McKenzie. He and his wife and research partner, Joyce, happened to be on vacation in the area and staying in the same campground. 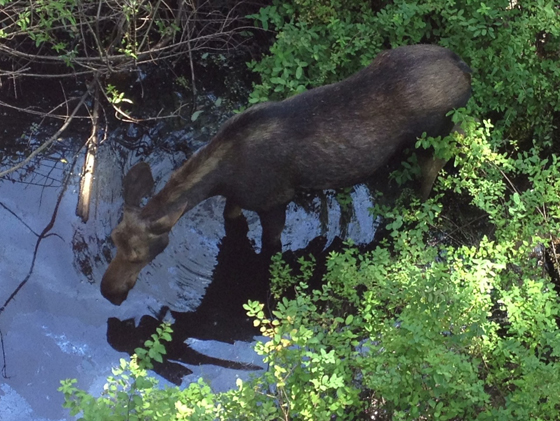 We saw dozens of birds, a leaping stag, multiple dragonflies and butterflies but I have to say my favorite wildlife encounter was this female moose. She was dining under a bridge right on the path. 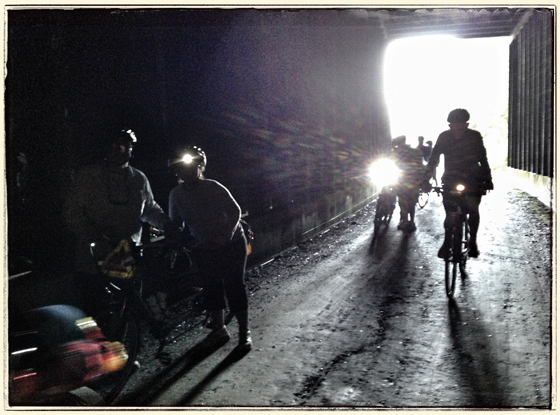 Midway through the trip, we were shuttled to the start of the compacted gravel Route of the Hiawatha. This rail-trail includes nine tunnels and seven trestles. Here the group is entering the longest of the tunnels, the 1.7-mile Taft Tunnel. 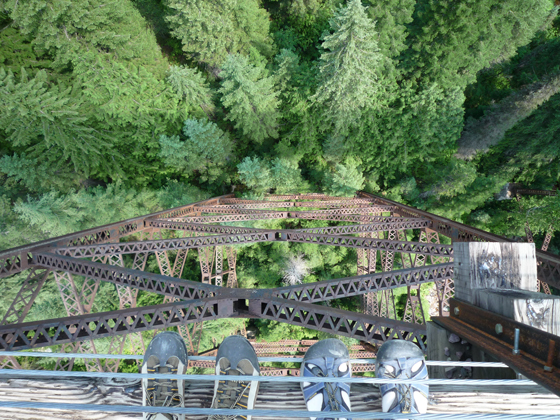 I experienced a bit of vertigo as I peeked over the edge of this trestle with Elisabeth. 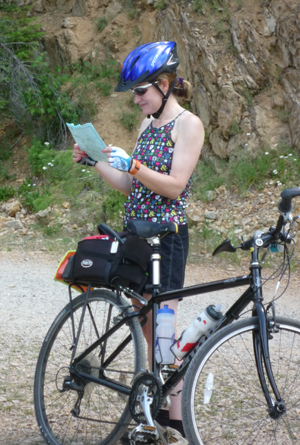 Though the route was pretty hard to get lost on, the maps came in handy when estimating how far we were from a water stop or restroom. 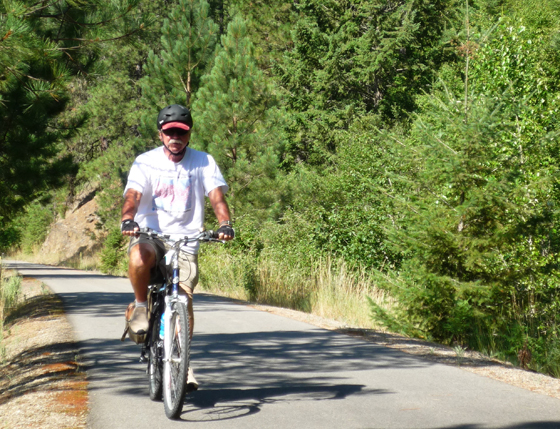 Since we were so good at lingering, we got to know sweep rider Bob Johnson well. This was one of the many times Bob circled back to check on us and report on what natural wonders were waiting ahead. Bob was also the group mechanic. Thankfully we didn't have bike issues and were able to simply enjoy his company. 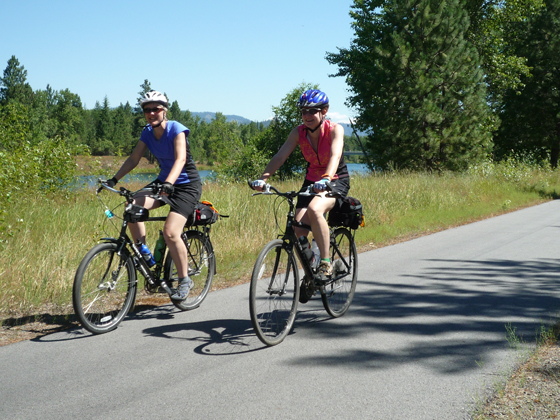 Turn about is fair play. After snapping his picture, I asked Bob to capture the Ladies in an Action shot. 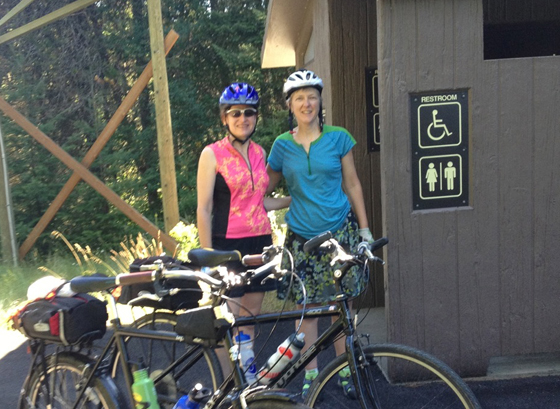 It was a hot week and we were drinking a lot fluids making the plentiful and clean restrooms along the way an important feature of the trail. 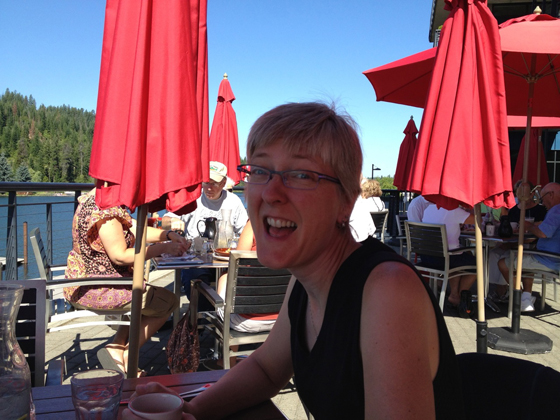 Post trip Elisabeth and I enjoyed a final night in Coeur d'Alene. We had a fabulous Italian meal that night followed by one last breakfast together on Coeur d'Alene Lake. Don't I look relaxed? Or maybe that's energized. Either way, it was a great trip and we are already talking about what we might want to ride next time.

Photos 10 and 11 by Elisabeth Revell.