I was a fair-weather cyclist most days. I tended to not start a ride if it was raining more than a sprinkle and looked to finish it ASAP if caught in a deluge. However, a few years ago I learned that cycling the C&O Canal Towpath can be as much fun in the rain and mud as it is on bright sunny days. It is all about your perspective. 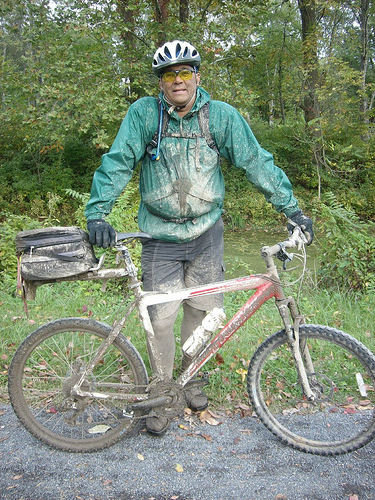 The day began with pouring rain as I looked out of my tent at the top of the hill in the campground in Little Orleans, Maryland. I soon realized that is was no passing storm, but a front that settled in the Potomac river valley. After a few hesitations, I quickly packed my gear, jumped out of my tent, packed the tent away, and headed back to the C&O Canal Towpath.

The canal was a mudpit at best. I saw my fellow riders dodging the frequent puddles that formed on the towpath with frowns pasted on each face, surely out of frustration with the weather. Tires were slipping to one side or the other as the riders tried to manuever with marginal success. I also dodged the puddles as best I could, wondering when the day's ride would end.

It dawned upon me that I was already soaked from head to toe with splattered mud. Who was I to complain since I was actually not working in the office but out riding my bike? It was at that moment that a devilish grin grew on my face. I decided to ride through EVERY puddle I could find along the trail, a very easy task. I was a young boy again, riding the dirt trails of my hometown. That is when the fun really began.

I spent the next 40 miles in sheer, muddy bliss. I had enough layers on that I was warm throughout the day. I focussed my aim on as much muck as possible. It did indeed rain almost the entire day with just enough of a break to sneak in a snack or two. I pulled into Cumberland, Maryland, at the end of the trail caked with enough mud and grime to make any mother angry. I landed at the Cumberland Trail Connection. They not only have a hose, they have what amounts to a firehose! The day ended with two showers, one to clean off the mud caked on both me and my bicycle, and the second to warm up properly at the YMCA in Cumberland to finish off the regular dirt that accumlates on the trail.

A smile comes to my face everytime it rains now because I remember the time that lovin' the mud change my perspective on rainy-day touring.

ON THE ROAD is written by the tours team — Lydia, Darrah, Mike, Mandy, and Arlen — tours specialists and intrepid bicyclists, covering all things related to the Adventure Cycling tours department. Check out our 2014 Guided Tours today!

Many years ago I accompanied my son's boy scout troop in a ride on the C&O Canal. It started to rain just after we left out starting point and proceeded to rain very hard. When I got home I just set up my bike in the back yard and hosed it off. Everything was covered with sand, but the sand only got into the freewheel.

I believe Arlen is a visual demonstration of the value of good fenders.

We at the C&O Canal Trust, the official nonprofit partner of the C&O Canal National Historical Park, enjoyed reading about your muddy adventure! Thanks for sharing a new perspective on riding the C&O Canal Towpath in the rain!

My wife and I rode a portion of the C&O trail from Antietem Creek Campground to DC after it had rained. There were mud-puddles everywhere and yet it was still a blast! Although I must admit our LHT's were equipped with fenders. I would have a hard time breaking camp if it was already raining than I would to keep going after I have already started out for the day and then it began to rain. Looking forward to biking the TransAm this summer!

I absolutely agree! The only thing I don't like about riding in wet, muddy conditions is the time it takes to clean up my bike - time that would otherwise have been spent riding it. Otherwise, if dressed corrrectly, riding through muck and mud is always a blast!