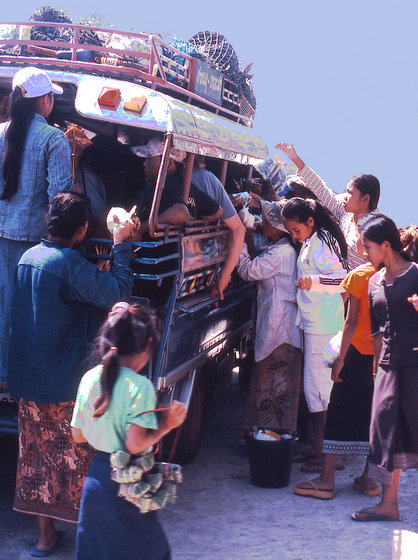 A couple of definitions I ran across were, "close to capacity" and "uncomfortably close together."

But what is "capacity" and what is "uncomfortable"?

Let's take the situation of putting your bike on the bus. Where I live in Seattle, the bike racks on the buses hold three bikes. A bus driver is not allowed to let you bring your bike on board. So the capacity is three. End of story.

In many countries around the world, the capacity of public transportation is whatever will fit inside, on top of, strapped onto, hanging off of the vehicle. The bus is at capacity only when the driver screams and waves his arms "Enough!" or when the bus literally topples over. You think I'm kidding? It happens.

One of the many things I love about travel is that it constantly tweaks our own language. Each one of my bicycle journeys has redefined certain words: beautiful, ugly, loud, serene, rich, poor, fair, unfair, tragedy, happiness.

I remember getting onto a bus in Guatemala. The driver wouldn't leave until all the seats were filled. Then he kept picking up people along the route. His helper, who collected the fares, walked on top of the backs of the seats to get around (being small was a requirement for this position). Before each stop I thought, "This bus is full." And then two or three more people would get on. I began to wonder if there was actually enough oxygen for us all to breathe.

The answers to those questions (and so many others) are defined and influenced by our wanderings on this incredible planet.