If there's one thing I enjoy as much as bike touring, it's taking old things and turning them into something new.

So, when I found myself with an old bicycle wheel recently, I couldn't bear to throw it out. Instead, I turned my mind to creative ways to use it. I considered turning it into a bicycle wheel pot rack, or a bit of modern bicycle art, before finally deciding to mount it on the wall. 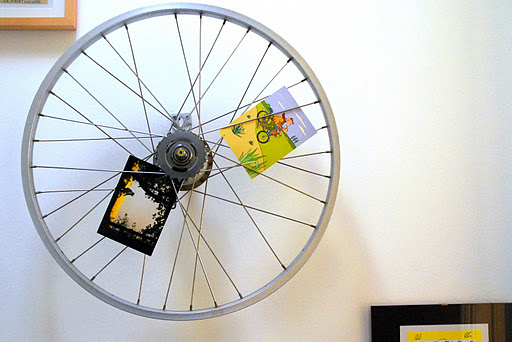 This is now a place for postcards, photos, and other bicycle-themed things we manage to collect. It's also just plain satisfying to spin the wheel as we walk past, even more so when it's one that was fitted to your bike!

Next, I'm planning a bicycle gear clock for that upper right corner of the wall, and a coffee sleeve for my morning cup of coffee, made out of an old inner tube. Maybe you also have some good ideas for all those bicycle parts you've worn out on tour?

FRIEDEL GRANT gave up life as a journalist for Reuters to ride a bicycle around the world with her husband. They pedaled 48,000km through 30 countries before settling down to ride bikes in The Netherlands. Friedel writes about bike touring on her website, Travelling Two and you can follow her on Twitter (@travellingtwo). She also contributes to Transitions Abroad and has written a chapter for the Adventure Cycle-Touring Handbook.

How did you mount the bike wheel? This is a great idea. We are trying to mount wheels for a bike exhibit and show kids different methods of noise makers for spokes. Need to figure out how to mount the wheels

Did you figure out how to mount? Thanks.

Ok, my post got lost when I did this anonymously. I am going to try again. Don't forget the folks at Resource Revival - http://www.resourcerevival.com/ - although they get to keep the stuff. If you want to keep it, then yes, you're going to have to clean it up and make it into something else.