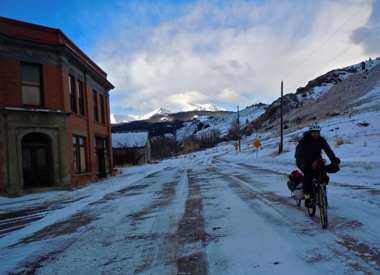 We've had some great stories of bike overnighting adventure posted at BikeOvernights.org over the past few weeks.

Biking to Ski Hollowtop Peak, Tobacco Root Mountains, Montana, published on April 29. In it, Chris Bangs writes about his fellow adventurer Jon Wareham's ride from Bozeman to the almost-a-ghost-town of Pony, Montana, in February, where they camped out in the snow and cold prior to climbing and skiing Hollowtop Peak the next day. “On the summit ridge we encountered gale-force winds that felt like jumping out of an airplane, where the wind was trying to excavate my nasal cavity,” Chris writes. “Struggling not to get blown off the peak and land somewhere in North Dakota, we successfully made big sweeping turns off the summit, skiing down the crater-like bowl that gives Hollowtop its name.” After returning to the lower elevations, he and Jon headed for the Pony Bar, where they were entertained by Scotty, the owner, “one of those friendly Montana folks who loves to drink, cuss, and tell loud stories that leave you hanging on the edge of your seat.” The next day’s ride back to Bozeman was cold and stormy.

On May 6 we posted what has grown into a very popular piece titled A Primer on Camping Stoves. In it, Canadian Byron Enns shares much of what he learned about the pros and cons of various stove types on his very long ride from Calgary to Buenos Aires. “To my mind, Bryon writes, “the five most reasonable options are a liquid multi-fuel stove, an alcohol stove, a Kelly Kettle, a wood gasifier, and a propane stove. I’ll go into each of them in this article.” And that he does.

Those were followed up by Pine Creek Trail, Pennsylvania, on May 13; The Road to Pescadero (California coast) on May 20; and A Cold Ride from Cumberland Valley to Happy Valley on May 28. Interspersed between story postings, as usual, were photos of the week, including this one from May 3, from the July 2, 2012, post Big Ride to Big Ridge, Tennessee. 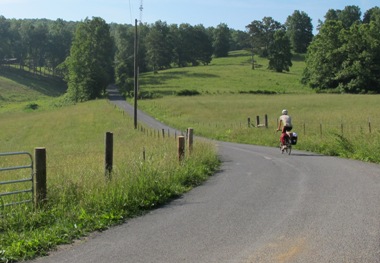 Keep an eye out for stories coming out of Oklahoma, Nevada, and Idaho.