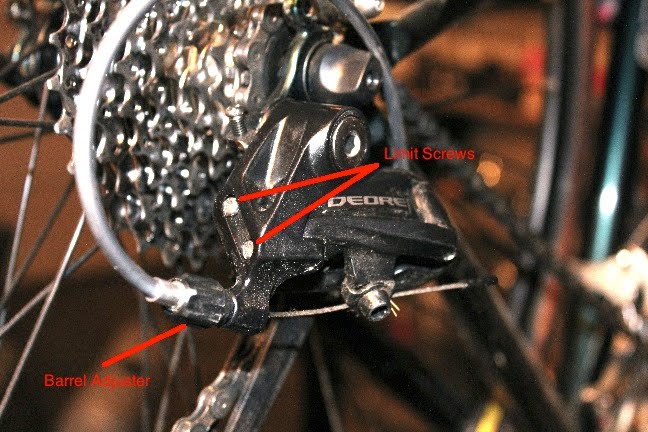 The derailleurs on a bike may seem pretty complex, but once you start fiddling around with them you'll find them surprisingly easy to troubleshoot. When you're on the road, and away from a bike shop, knowing how to tweak your derailleur can save you a lot of skipping gears and frustration.

In most cases when a derailleur moves out of adjustment it's the rear derailleur. It's more exposed to being banged around than the front derailleur; moreover, for crisp shifts the rear derailleur needs to be dialed in more precisely than the front. If your bike and/or cables are relatively new, the derailleur could be coming out of adjustment simply because the cables are settling into their new housing. In other cases, mis-shifts may result from a bent derailleur hanger, worn out chain/cassette, or frayed cables and housing. These are issues that would ideally be worked out before you head out on a tour, but still worth keeping in mind.

Before I get into making adjustments, a quick note about a bent derailleur hanger. To find out if your derailleur hanger is bent, look at the two derailleur pulleys from behind your bike, and make sure that they lineup vertically. If they are skewed one way or the other, you probably have a bent derailleur. At this point, it is a good idea to try to adjust your derailleur the best you can without bending it back, and then have a bike shop mechanic line it back up for you. If you absolutely have to bend it back, be sure to remove the derailleur before going after the hanger. For steel and titanium frames, bending the hanger into place isn't much of a problem. For aluminum and carbon frames, the derailleur hanger will often be replaceable, in which case carrying around a spare hanger isn't a bad idea.

Alright, now onto the actual adjustments. Almost all derailleurs are set up in a similar pattern for making adjustments. You have two limit screws and a barrel adjuster. The limit screws are often marked with an 'H' for high, and 'L' for low. The high limit screw adjusts your high gear (smallest rear cog), while the low limit screw focuses on the low gear (largest cog). Once initially set, these generally don't need to be adjusted very often, but they are a good thing to look at. Shift into the biggest gear up front (largest chainwheel), and the biggest gear in back (smallest cog) and look at the pulleys from behind the bike. The pulleys should be directly in line with the small cog. Do the same for the low limit, shifting into the low gear up front, and large cog in the rear. If the pulleys don't line up with their respective cogs, turn the limit screw clockwise to move the pulleys toward the center of the cassette body, or counterclockwise to move the pulleys outward. You don't have to make big tuns of the screw, only about quarter (90-degree) turn at a time.

If the limits look good, you probably only need to play around with the barrel adjuster. In some cases this is located on the back of the derailleur, while in others it's near the cable stops on the downtube. The easiest way to accomplish this is with your bike in a repair stand, but since you probably aren't carting one around, see if you can hang the bike on the low branch of a tree, or have a companion hold it up for you. Spin the pedals and shift the gears one at a time. If the chain struggles going from a larger cog to a smaller one, turn the barrel clockwise. If it struggles moving from a smaller cog to a larger one, turn the barrel counterclockwise. As with the limit screws, make small turns of the barrel each time and progressively check your progress.

Very good directions! Don't forget to also check out these additional 'How To Videos" by PARK TOOL and PERFORMANCE BIKE websites.

I think anyone that is serious about bike repair should consider the park tool set (http://tour-de-bike.com/bike-repair-stand-review) small enough to get into car for bike hike trips ect.

Thanks for posting this. I need to practice!