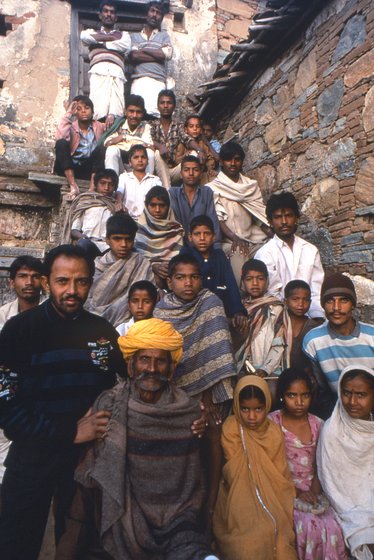 This portrait was taken after a night of feasting in a little village a day's ride outside of Takhatgarh, Rajasthan. The reason for the party? Me! Or I should say, the odd occurrence of a touring cyclist pedaling into their village. The first westerner to visit in over ten years.

The gentlemen in the yellow turban is the oldest man in town, and it was extremely important that he be in the photo.

The beauty of cycling in India was seeing the country that most tourists and travelers were missing. I met a group of backpackers in Jaipur. They had bussed from Agra and their next stop was an overnight bus to the desert city of Jaisalmer. So much distance covered in the dark.

That same journey took me four days on a bicycle. Four long, hot days. And yes, there were times that I longed to be on an air conditioned bus. But, oh the adventures I had in those four days.

I look at the faces in this portrait, and the memories come flooding back. Too much food. Too many beers. Dancing and singing.

After taking this photo I was packing up my panniers and my host's mother came up and grabbed my arm. She took my wrist and tied around it a small home-made ornament of gold shiny paper with colored buttons and silver fringe. Her son explained that she had heard I did not have a sister, and she would like to be mine. She flashed me a three-toothed smile.