Adventure Cycling’s Routes & Mapping Department was recently alerted to a change coming to the Pacific Coast Bicycle Route (PCBR) in Southern California on Section 5. Beginning March 1, 2016, Camp Pendleton will require cyclists to be pre-registered to ride across the base. “Our goal is to maintain a great relationship with area riders but also balance that with security and protection for our Marines, Sailors, civilian employees, and families. Thank you for your patience and understanding,” wrote Carl B. Redding Jr., Director of Public Affairs, Marine Corps Installations West, in an email. 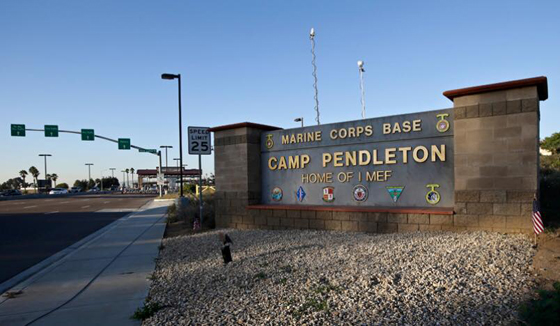 A valid U.S. or state identification card is needed to register; non-U.S. citizens require a sponsor. The registration process for U.S residents may take up to 7 days to complete and is good for a one-year period. More information on base access and the registration process can be found on the Camp Pendleton website.

The PCBR is one of Adventure Cycling’s most popular routes, so the impact on traveling cyclists will be wide. With its gorgeous ocean views and landscapes, plentiful services, and a long season for travel opportunity, it appeals to cyclists from all over the world with varying levels of ability and vacation time. Three statistics back this up:

Note: None of these sets of numbers takes into account the multitude of cyclists who ride this route without benefit of our maps.

In the near term, for cyclists who do not register in advance or who are not eligible to receive access to the base, Caltrans has stated it is legal to ride on the shoulder of I-5 between Las Pulgas Road and Oceanside, exits 62 to 54.

While this is the most expedient response to the situation, we understand that in the past, a separated bicycle path was planned, off the base, to avoid the problem of access. In the long term, we will encourage Caltrans to re-investigate this idea and do what we can to support it coming to fruition.

In order to reach the widest audience, this information can also be found on the addenda/map updates and corrections for the Pacific Coast Bicycle Route, Section 5 with every map sold, both hardcopy and online.

Photo provided by Department of Defense.

I'm glad you and the two other women had no issues with access. I just checked the website and it appears this registration policy is still in affect. We did recently hear of another cyclist who was turned away because he did not register in advance.

Good for people to know. They did put my license through a reader. I wonder what they were scanning for?

How do I get a sponsor ?

You can find that information on the base website: http://www.pendleton.marines.mil/About/BaseInformation/BaseAccess.aspx

Really sad. What can a foreigner do now? Rode this route and enjoyed Camp Pendleton and it's friendly people. At least give us foreigners a chance to register also! PLEASE!

I've lived in San Diego since 1980. Cal Trans, nor San Diego County will ever get a separated bike route through that area. The California Coastal Commission controls all access along the coast that isn't held by the Feds. There are plenty of investigations into that entity regarding corruption. It has no governmental oversight. The Coastal Commission even controls the number of parking spaces along the coast, and their relationship to bike lanes. Residents, get registered. Everyone else, take Interstate 5 shoulder.

This sounds rather paranoid to me. Will a terrorist be deterred by the need to find a sponsor? Are there any indications that terrorists on bicycles have attempted to attack US military bases. Should overseas governments be responding by requiring American citizens to find local sponsors?

Actually there are credible threats directed at the families of service members and the bases themselves. The bases are taking these threats seriously and have implemented a number of new security plans, some visible and others not. All the bases in the country have started to require police clearance to enter them and they are being very picky about who they pass.

Why doesn't Camp Lejeune do this? I live in Sneads Ferry and am a Warmshower host. Camp Lejeune used to let riders come through the base. They now require a length detour, through Jacksonville.

We don't know why Camp LeJeune doesn't have a similar policy. Due to their changed circumstances, we had to reroute the Atlantic Coast route a few years ago. Policies seem to vary from base to base.