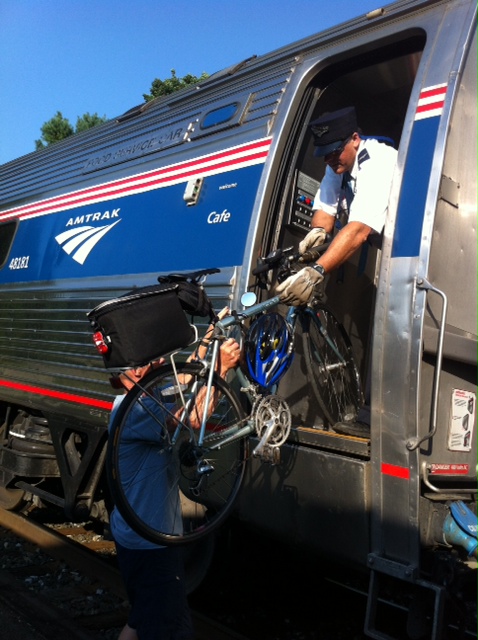 One of the biggest hurdles to great bike travel in the United States is the lack of consistent and affordable support for bicyclists on Amtrak, coach carriers, and airlines. Imagine if you could roll your bike safely onto a train or into a cargo bay on a motor coach anywhere in the U.S. — just think of the travel options this would open up for bike overnights, weeklong trips or cross-country trips.

Amtrak, in particular, draws the ire of cyclists as it has cut back its roll-on services significantly over the last few decades. As noted in a recent Streetsblog article, "only eight Amtrak routes allow passengers to roll bikes on board fully assembled. Even those that do allow 'walk-on' service only do so in very limited numbers; most trains allow just six bikes per train."

But here's the good news — Amtrak is showing signs of changing its mind when it comes to accommodating bicycles — and advocates and public officials are turning up the heat to speed the pace of change.

As you'll see in this recent blog post by Ginny Sullivan (Adventure Cycling's director of travel initiatives), Amtrak is working on a pilot project for roll-on/roll-off service between Washington, DC and Pittsburgh (in part to help serve cyclists who are riding the wonderful 330-mile C&O/Great Allegheny Passage off-road trail between those two cities). And beginning September 6, the Michigan Department of Transportation and Amtrak will launch new roll-on/roll-off service on the Amtrak Blue Water line (Trains 364 & 365), which operates daily between Port Huron and Chicago via East Lansing and Kalamazoo.

I love the quotes in the announcement. Here's Tim Hoeffner, Michigan's director of the office of rail: “Bicycle travel and tourism is important in the state of Michigan. Amtrak inclusion of bike service on Blue Water trains is beneficial for Michigan travelers.” And here's Derrick James, Amtrak's director of government affairs-central: “We’ve worked with the cycling community to modify these railcars so bikes can be secured without disassembly. We look forward to measuring the success of this service with an eye to expansion to additional routes across our national network.”

That's music to our ears! But we are not relaxing. Our travel initiatives associate and uber-volunteer in Michigan, Kerry Irons, is conducting an inventory of current Amtrak bike accommodation services. (Kerry will also be at the news conference Thursday at 8 am at the East Lansing Amtrak station to announce the Blue Water service.) We have joined with other national and state groups, along with public officials, to urge Amtrak to provide better bicycle service on the Adirondack and Ethan Allen lines in Vermont and New York.

Finally, yesterday we joined with many national and state cycling groups to ask for a meeting with Amtrak President Joseph Boardman on their bike policies and services. Please take a moment to read the letter (PDF) and feel free to circulate it — special thanks to Champe Burnley, president of the Virginia Bicycle Federation, for pulling it together. We'll keep you posted but in the meantime, there are more initiatives and models emerging for how we can get more bikes on board!

Last year my wife and I planned a bike and train vacation using folding bicycles. As per the Amtrak website folders are allowed on any Amtrak train with no travel box. Our bikes easily fit the requirements. On the outbound trip from Philadelphia to Vermont no problem. Very helpful red cap helped us load. However on the return trip both the station agent and the conductor angrily told us our bikes were not allowed on the train outside of a box. This continued even after they were confronted with the rules. I had to fight my way on the train otherwise I might still be in Vermont. Bikes on Amtrak is a great idea but maybe they should get their employees to read the rules and learn to be polite to customers.

Oh, Amtrak: WHEN you build it, WE WILL come!

This was back in 2013. Today, train-bike blending seems slam-dunk easy Time to grow has happened. Pilot projects have happened and can continue to happen. Squeak, wheels, squeak! Amtrak hearing that we want systemwide bicycle inclusion begins with one route, then two, then three...pretty soon it is systemwide, then we wonder how we did without it.

As Rosie the Riveter said: We Can Do This.

Just think of the opportunities that would open up , along with increased ridership for Amtrak, if roll on service were available for the 400 mile ling Erie Canal Bikeway especially if it included roll on connections to Albany/ Buffalo from Boston, New York, and points west. The track parallel the entire canal way.

There is no / nada incentive to enhance services as long as Amtrak is subsidized so heavily by the American tax payer to the tune of $1.5 billion in 2012. That also accounts for the 'attitude' factor at some stations mentioned above, too.

Just seems Amtrak is missing out on lots of domestic and international customers by not getting this right. Wonder if recently ordered new passenger cars by Amtrak will help out situation. Bikes and trains just go together.

We could regale you with stories of (attempting to and occasionally succeeding) to travel with bikes via Amtrak. The person who commented that it depends on the mood of who you have to wok with. That's not much help when you need to plan a major trip. Any improvements on train in and out of major West Coast cities would be very welcome.

Great article, nice to know. I plan on flying to Chicago and then taking the train to my childhood home in Kalamazoo. I will bring my bike and partake in some of Michigan's awesome trails. The Kal-Haven trail being my favorite. Nice to know the train is friendly again. I look forward to using it again.

I wrote to them years ago with no luck so glad to see someone is getting through ~ or trying too.

I believe the meeting and letter is the right move. I live in the Seattle area and we get really good service, apparently. My friends and I send our bikes ahead when we tour by bike utilizing Baggage Express and it can be a mixed bag. Generally it involves the baggage agent's frame of mind at bag embarkation, particularly when a tandem is involved. I read somewhere tandems are not allowed, yet many posts indicate there is no problem as long as you are aware o and honor the 50# limit. Most agents I have dealt with are personable and easy to work with, but some have difficulty with the paperwork. Others seem to work pretty hard at building barriers. It would be nice to remind A/C members and readers to use the best people skills. It would also be productive to have Amtrak push bike customer skills training. Here is an example of the adage that what can go wrong, will go wrong: https://www.crazyguyonabike.com/doc/page/?o=1&page_id=313235&v=2Q

Amtrak used to take tandems as well, but discontinued that a few years back (at least out of Boston to Chicago). See this article...St. Paul Pioneer Press (MN) - October 10, 2011 - A1 Main

In the summer of 2010, Doug White and his wife, Therese, of Shoreview took an Amtrak train to Seattle and rode their tandem bicycle from the Pacific Ocean back to St. Paul. This summer, the couple completed their tandem-cycle crossing of the country, setting out from Minnesota and reaching the Atlantic Ocean at Portland, Maine. They returned from their trip by train, but a big mistake on Amtrak's part meant they were forced to leave the tandem bike behind. The couple had made...

The Coast Starlight running between Seattle and Los Angeles could REALLY benefit from a roll-on, roll off service! In addition to servicing long-distance cyclists on the Pacific Coast Bicycle Route, this would make it just that much easier for folks doing long weekend trips, as well as encourage connectivity between the major bike crazy towns of LA, San Francisco, Portland and Seattle. Thanks for working on our behalf for bike-friendly train travel!

Good news and about time for Amtrak. Being able to take a train to Pittsburgh would make riding the GAP/C&O ride much easier to do and help generate tourist dollars. It is one well worth doing. I wish there was a way to take my bike to the start of the Atlantic Coast route!

Just got done using the train system in Italy for bike travel. If they can do it, we ought to be able to as well.

I'm delighted to hear about a Pittsburg connection via the Capitol Limited, as well. Any idea when the pilot study for roll-on service might start? I'm planning a GAP/C&O ride from Pittsburgh to DC this October and would love to be a 'guinea pig' to get my bike to Pittsburg for the start without full disassembly and boxing.

Is there someone at Amtrak I could contact specifically about the pilot roll-on service?

I to have used the trains of Italy and other European countries to facilitate bicycle touring and have the same thought. Why oh why is it that the USA can not have trains to MORE places and trains have proper assembled bicycle access.

I know so many people that would use this service including myself.