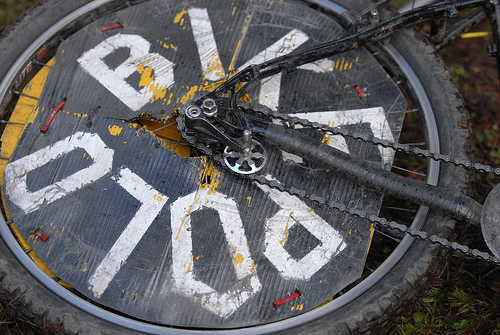 I think the first time I ever heard of bicycle polo was back in 1989 at Fat Tire Bike Week in Crested Butte, where I watched a match in action. At the time, I figured the players were just a bunch of Colorado crazies that included more than a few equestrian wannabes who had decided to settle for two wheels rather than fork out the bucks for four legs and one horsepower (and a big pickup truck and a horse trailer and ...)

As it turns out, however, bicycle polo was invented in 1891, making it nearly as old as the safety bicycle itself. In fact, it was an Olympic sport in 1908 at the London games.

In recent years, the venues for this cyclo-variation on the “world’s oldest team sport” have been making the switch from large grassy fields in the great outdoors to hard-surfaced floors in the smaller indoors. Consider a story that appeared in the November 28, 2010 Los Angeles Times, where it’s written: “... the 'hardcourt' style — played on hard surfaces rather than grass — has become popular only in the last decade, beginning with rough-and-tumble games among bike messengers.”

You say bicycle polo, whether contested inside or out, sounds a little too rough and tumble for your liking? Then maybe golf cart polo is more your speed. I’m leaning that way myself.