Planning for a 2014 Tour Divide Ride 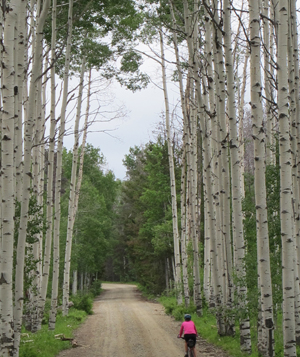 With the turning of the new year, inspiration to ride Tour Divide 2014, which follows the Great Divide Mountain Bike Route (GDMBR), is reaching new heights. This self-supported race from Banff, Alberta, to Antelope Wells, New Mexico, is a popular choice for cyclists wanting to test their mettle against the elements and other cyclists on the 2,754-mile mountain-bike route.

We've received several inquiries asking if there will be new maps out before the Tour Divide Grand Depart the second week in June. There is a small chance that might be the case but riders would not likely have maps in hand until days before setting out — not the best way to plan such an arduous undertaking. We recommend purchasing maps now and using the online addenda/map updates and corrections to update them as needed. 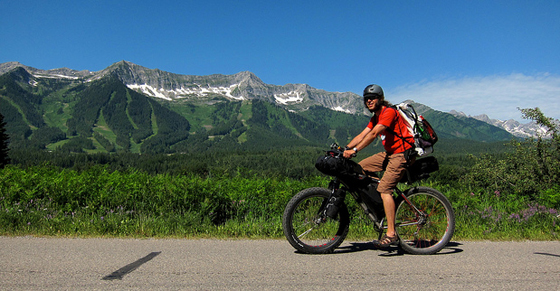 Doug Dunlop riding out of Fernie towards the Flathead Valley at the start of his trip with Vik Banerjee in July 2013. He's on a half-fat Ti Salsa Mukluk with Porcelain Rocket bikepacking bags.

In the next update, most of the changes to the maps will be service related. The one exception to this is a reroute developed north of Butte, Montana. It moves cyclists off the lone stretch of interstate highway previously on the GDMBR. This change is already documented in the latest revision of the Cycling the Great Divide book (2nd edition, published in 2013). We do not know if the 2014 Tour Divide will follow this reroute, check the rules page on their site. 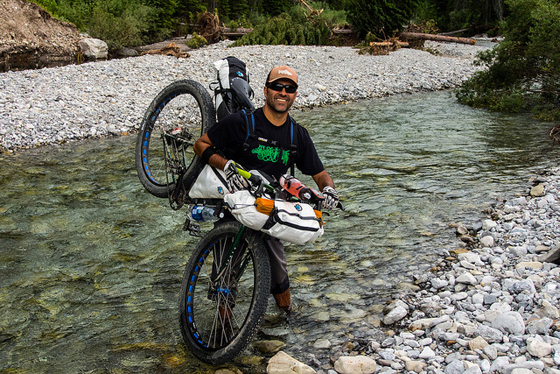 Vik crossing a section of the Flathead River washed out by the floods of 2013. He rode a Surly Krampus bike with Porcelain Rocket bikepacking bags and had wet feet most of the trip!

Another thing to keep in mind about this route is that in late June 2013, the Canadian portion was hit hard by heavy rains and damaging floods which caused road, bridge, and culvert washouts. While we received reports of cyclists riding the route later in the year, it's conceivable road conditions will still be rough with unrepaired stream crossings and washed out roads. Much of this area is remote and it's likely that few of them were repaired last summer.

Doug looking for a way back up onto the forest service road after fording the same section of the Flathead River as Vik was crossing in the photo above.

We followed the progress of this situation on our Temporaray ACA Route Road Closure Forum and suggest anyone riding this year read those discussions for a clearer picture and alternative routing. It is unknown to us at this time if permanent route changes are needed.

If you're thinking about riding this or any other route in our network, remember that one of the Adventure Cycling member benefits is a discount on maps. Right now is a great time to become a member. New members that join online by 5:30pm MST, January 12 will receive a free 2014 Bicycle Travel Calendar, and be entered into daily raffles for great prizes. Don't miss out, join today.

Photo 1 by Michael McCoy on the Great Divide Mountain Bike Route in Wyoming.

Photos 2, 3, and 4 from vikapproved's photostream on Flickr documenting a July 2013 tour on the Canadian portion of the Great Divide Mountain Bike Route. See his blog post Flathead Valley Recon Loop... for more photos and the story.

Hi, I would like to enter the 2014 but cannot for the life of me find anybody to contact as regards entering and information. Have you had any luck and info you are able to pass on to me.

That first photo is aspen alley right? Which is in Colorado. Not Wyoming.

Hi Andrew: You are correct that the first photo is in Aspen Alley, but Aspen Alley is in Wyoming, about 17 miles before entering Colorado.

Even with the flood damage the CDN GDR in the Flathead Valley area is passable with some reasonable crossings of rivers/creeks.