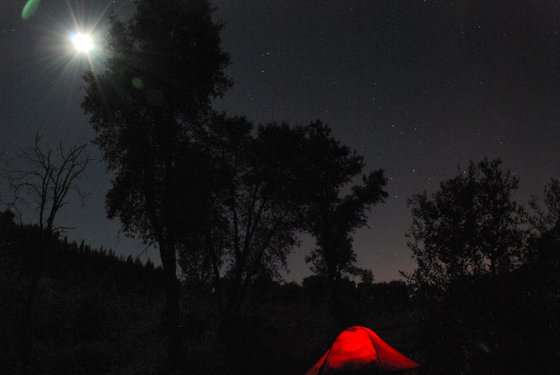 The moon and I have an on-again off-again relationship. When I'm at home in the city, weeks can go by without us even acknowledging each other. I don't know where the moon is or what phase it's in. I catch a glimpse of it every once in a while … when it's not cloudy or raining.

But on a bicycle trip, we're buddies.

I can always tell you the phase the moon is in while I'm on the road. The moon is my light source to pitch a tent, or a sliver of beauty against a clear blue sky.

We are cycling in Portugal right now. The moon is a waxing gibbous, which means it will be a lantern for camping for the next week or so. Then it will begin to rise later and later after the sunset. But that will have benefits too. Less ambient light to gaze at the stars.

I won't go to bed with the moon glow on our tent, but I will say hello to my friend in the morning and throughout the day.

Sadly, our trip will end. I'll head back to the city and the moon and I will go back to being acquaintances, rather than the best of friends.