Perks of a Summer Bike Trip 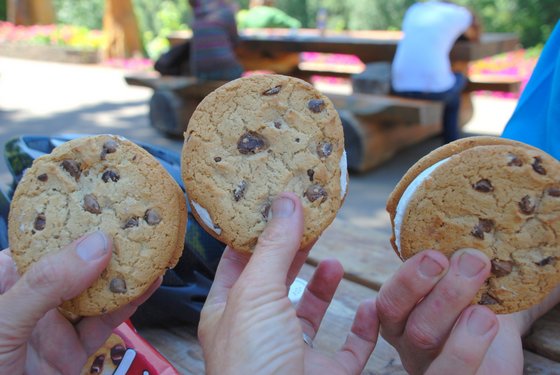 There is nothing, nothing better than an ice cream sandwich on a hot, sweaty summer day. Well, maybe a triple-scoop ice cream cone ... or two ... followed by a milk shake ... or two.

But take the bicycle trip out of the equation of the above photo (and scenario), and you just have three guys getting fat in a campground. Not a pretty picture.

But there were bicycles involved, and so all of those calories were burned off in the pursuit of scenic beauty in the forests of Oregon.

I pedaled from Portland to Klamath Falls (via Crater Lake) with my two childhood buddies this past September. One of those buddies, Thomas, was the friend I first pedaled across the country with in 1981. We hadn't done a trip together in 29 years.

If you'd like to read about that trip, grab a copy of this month's (March) issue of Adventure Cyclist magazine.

You don't receive Adventure Cyclist? Then it's high time you became a member of the Adventure Cycling Association. Your membership not only comes with nine annual issues of a magazine filled with photos, tips, and stories from the road, but you'll be supporting a non-profit whose sole focus is to inspire people to travel by bike.
Like an ice cream sandwich on a hot summer day ... how can that be bad???