March 31, 2017 - Willie Weir posts to his Sights and Sounds blog every other Friday. 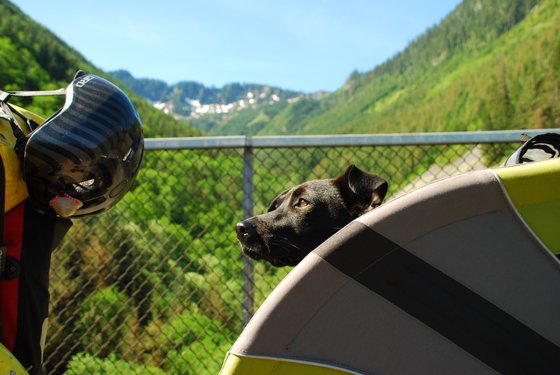 I wrote in the Dec 2016/Jan 2017 issue of Adventure Cyclist magazine about the long struggle to get our rescue dog out on a bike trip. I joke that our journey with Tiva consumed more prep time than for all our other trips combined. Except it wasn’t a joke ... it was three years and a lot of love, patience, and persistence. Below is a recap, thanks to Steve Sweitzer with PetPalsTV.

And now that Kat and I have joined the ranks of “bike travelers with dogs,” we have become aware of a lot of amazing people (and canines) out there. If you dream of bike touring with your dog, check out the websites below. They are a treasure trove of inspiration. 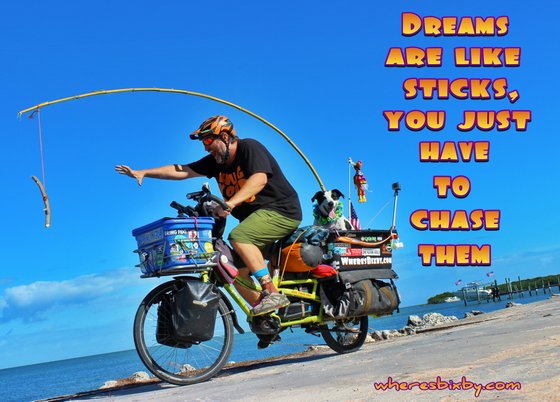 Where’s Bixby? Bixby is a rescue dog. Her human was a chain-smoker who hadn’t ridden a bicycle since high school. Over 20,000 miles later, Bixby and her human are still going strong. They’re having adventures while raising awareness of the need to support local shelters and rescue organizations. 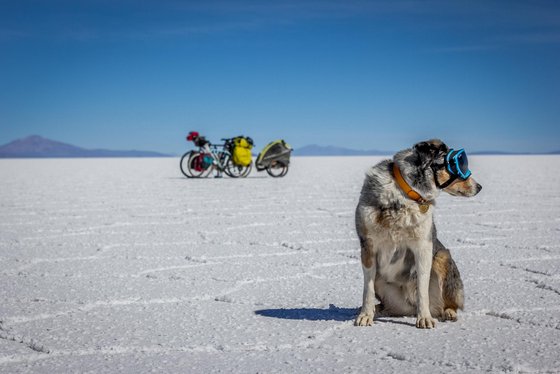 Long Haul Trekkers. Dave, Jen, and their dog Sora, in the goggles above, pedal and run throughout the world — drop-dead, gorgeous photos, great advice, and honest writing. Check out their new series “Street Tails” profiling rescue dogs and their humans.

Cycling Gypsies. In 2008, Zoa and Fin took off on a 17,000 mile journey with their two dogs, Jack and Paco. Their adventures inspired them to write the children’s book series, The Dog Detectives.

The three examples above are extreme. It can feel daunting to read about epic adventures when you’re simply wondering if your dog would ever put up with riding in a trailer. But don’t be discouraged. Every epic dog/human bike adventure begins with that first mile.

And as Bixby says, “Dreams are like sticks, you just have to chase them.”

Now this is something every dog lover should try. To travel using a bike with there pooch.

Thanks man, I'm convinced all dogs like bikes and they are by far the best travel companions.

Thanks so much for featuring my human and I in your blog. He has trouble with words with more than 2 sylabols so I just read it to him and he really enjoyed it. Now, off to chase those sticks! Bixby

My pleasure. Hope you and your human knock on our door someday. What is your favorite dog treat ... so we can make sure we have some on hand?

Thanks Willie. We pedaled through Missoula and stopped by in 2014. Hopefully we can come there again tis summer. Its Rufftastical up there. As for treats, My favorite treat is teaching humans hoe to play this game I invented called fetch so if we make it back there get your arm warmed up. :)

Thanks so much for featuring us and for the kind words about our blog and photos, Willie. The world needs more dogs on bikes!

We look forward to meeting you all at your presentation in Portland in April.