Pedaling The Planet on a Shoestring 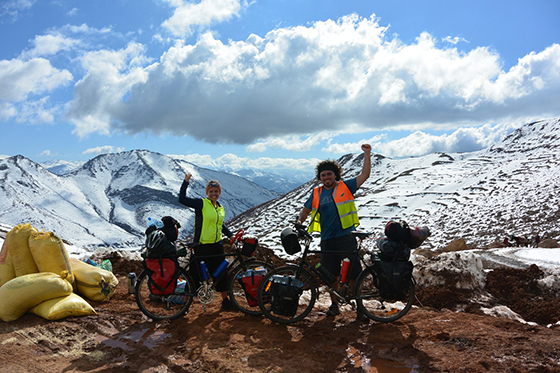 I’m Sarah Webb from Australia. I’ve spent 15 months cycling from Scotland to China, via North Africa, the Middle East, and Central Asia, and I’ve used our experiences to solve the big money mystery surrounding long-term travel. Right now, I’m supplementing my round-the-world cycling funds in China before hitting the road again in November to pedal to South East Asia, then Alaska to Argentina. This article contains my top tips on how to bike the world on a shoestring budget and how to earn money on the road. You can keep up with our travels here: longrodehome.com, @longrodehome, Instagram, and Facebook.

But first, let’s start at the beginning.

In June, 2014, I packed up my little apartment, sold the fridge, dumped a few prized possessions (books) at my sisters, gave up my career and took my bike, some panniers, and my boyfriend to Scotland. From there we pedaled to China via North Africa, the Middle East, and Central Asia with about $30,000 Australian dollars and the naivety that comes from zero experience unless you count reading The Hobbit. The plan was to reach Argentina (with the American leg beginning at Prudhoe Bay, Alaska), but by Kazakhstan, we were down to our last couple of thousand dollars. So, did this mean game over? Absolutely not.

We can’t speak for everyone who’s ditched the office and sold their belongings for a backpack or a bike but for us it was, initially, relatively simple.

First of all, we had to decide to do it and secondly, we saved our butts off.

We scrimped and lived like peasants for two years. No new iPhones, no lavish dinners out, and no new clothes, in the hopes of accruing enough for a decent trip. By the end of our frugality, we had about $40,000 AUD. The truth is we’d hoped for more, but life got in the way and our equipment cost a small fortune: bike, panniers, clothing, tent, etc. to last four years. And then, there were the flights and visas.

We knew our savings wouldn’t go the whole nine yards, not with our love of bakeries and cappuccinos, and so from the word “go” we brainstormed ways to supplement it.

Most people we’ve met on the road have funded their world trips with work at one point or another. Some are fortunate enough to be IT wired and can work from their laptop on a beach in the Bahamas and others take a guitar and busk in the street or simply take seasonal jobs. We met a couple who made and sold jewelry, not a big earner, and others who simply stopped their trip to work for a few months before taking it back up again.

You’ve got to play to your skills and if you don’t have any, then you’ve got to be prepared to do whatever comes your way or live very cheaply.

Whether you use sites like www.helpx.net or wwoofing, part time work for food and board, to save some dollars, sleep in ditches, hound couchsurfing hosts, or dumpster dive, and we’ve met people who did all those things, it all helps the bottom fiscal line. And the underlying message is this: where there’s a will there’s a way. 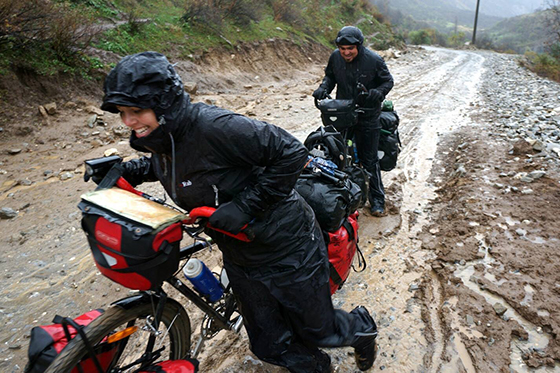 So how did we do it?

I am a journalist and before I left Australia, I worked for the country’s biggest media company. This enabled me to freelance for the first six months, in the way of a monthly column, and earn a little extra money. Freelancing, however, is a fickle business and if you don’t have a foot in the door, you’ll more often than not find them slammed in your face.

Secondly, after waking up to the state of our miserably declining funds in Central Asia, we decided to break up our trip with some work. Being just under the age of 31 meant we could get a working holiday visa for Canada, or other countries around the world which take part in the working holiday scheme, and live and work for two years, if we wished to, experiencing life to its full extent in another country. At the end of the day, however, we snapped up an opportunity to teach English in China for a year, which is another popular option for travelers.

For us, it was a win-win situation. As a full time globe-trotter, you often tire of moving from place to place every day and so a respite in China, well if you count teaching screaming four-year-olds a respite, provided us with the opportunity to plant some shallow roots, earn some money, and really get to know another country. It’s a bit heart wrenching having to stop a world cycle trip halfway round, but the truth is, unless you’re financially blessed or you’re quite content with living on $2 a day, then for many this is the best option. And it’s a pretty good one too.

So with all that in mind here are our … 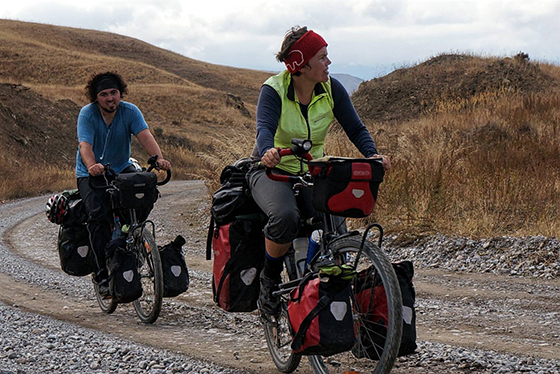 Top 10 ways to travel the world and not go broke!

1. Take a leaf out of your grandma’s book before leaving and save like never before. Politely decline invitations to dine out, borrow clothes from friends rather than buy new ones, avoid shopping malls like the plague, and research budget-busting student recipes.

2. Learn the resources. Get familiar with web sites like www.couchsurfing.com, warmshowers.org, www.helpx.net, www.wwoof.net, and www.workaway.info. Warmshowers is a global network of good samaritans who are or just love cyclists, and who’ll put fellow bike travelers up for a night or two. The other sites are for volunteer travelers. The flip side to HelpX and the others like it, pin you to one place. The up side is free board, food, and a new experience for the price of a few hours of labor a day. There are some really cool opportunities available, like working on husky farms in Lapland and helping run orchards in Italy.

3. Become an entertainer. Can you sing? Dance? Fire twirl? Blow giant bubbles from soapy buckets? If so, you can make money. We met a guy who did the last one in Europe and claims to have made enough money to survive and continue his travels.

4. Intersperse your travel with seasonal work. Cruise ships, restaurants, and hotels in tourist hotspots such as the Greek Isles and more are some of the options open to you. You won’t get paid a fortune, but you’ll earn enough to keep going and probably meet some great people.

5. Teach English. To get premium wages in this sector, you’ll need a university degree AND possibly a TESOL or TEFL qualification. China offers some great opportunities for English teachers, and is the most lenient with what they require thanks to the growing demand for teachers, but they often refuse candidates unwilling to spend a year or more doing it. You can have zero experience and land a job in a city in China paying upward from 10,000 yuan a month. Many institutions throw in living allowances on top of that and if you factor in the cost of living in China, you can save a pretty penny as long as you don’t get sucked into the expat lifestyle. Places like Japan offer top dollar, but higher qualifications and more experience.

6. Eat like a student. It’s more than a little tempting to spend half your time gorging down foreign feasts in quaint cafes or sampling the local beers in trendy pubs while you’re travelling the world. And while a global galavant wouldn't be the same without just a bit of the aforementioned behavior, its unfortunately best left as a rare treat. Shop in supermarkets such as Lidl, if you’re in Europe (cheap as chips), only stay in hostels with kitchens (if you’re backpacking), and buy seasonal and local produce. It’s less expensive and will at least give you a chance to act like a resident. In Morocco we ate bread, couscous, and vegetables. You could spend just a couple of dollars a day living like this. In Italy we ate salad and pasta, in England baked beans and oats, and in France many, many baguettes.

7. Ask for free accommodation. Your chances of scoring a complimentary room at the Hilton for free are probably limited, but don’t be afraid to ask the locals if there’s somewhere free to rest your head, or if you’ve got a tent, somewhere to pitch it. We’ve scored not just rooms, backyards, and once a piece of grass in a military compound in Morocco through this method, but we’ve also been frequently been fed and watered while meeting great people.

8. Run a blog and sign up for Google Adsense. Ok, you’re not going to make a killing with this. You’ll get a maximum of about $1 USD if a reader clicks on an ad on your website or blog, but if your site gets a decent amount of traffic, you could earn enough to at least pay for your food.

9. Take your trade with you. We met a New Zealand hairdresser in Marrakesh traveling with his scissors, apron, and clippers who made thousands of dollars working his own craft abroad. He was nobly doing it for charity, but in the hostel trade alone, hair stylists could easily make a little extra cash cutting the ragged lochs of scruffy travelers. 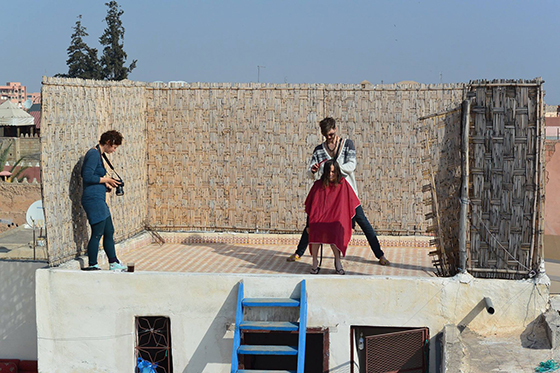 10. Become a movie extra. We’ve never tried this or known someone personally who’s done it, but in the international traveler sphere, there’s more than a few nomads who have signed up as extras and earned up to $100 a day and scored a free lunch. Apparently, the best country to try this out in is India, Bollywood producers love foreign extras, but realistically you could do it anywhere.

Thanks for reading! And keep up with the journey here: longrodehome.com 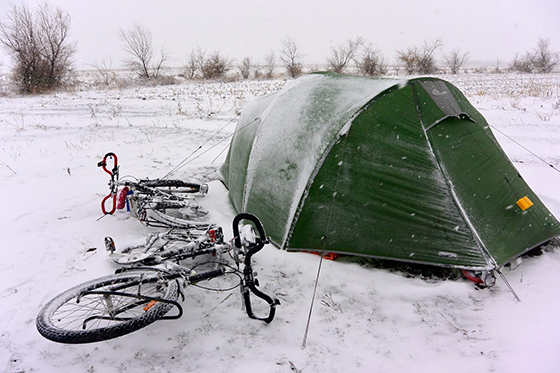 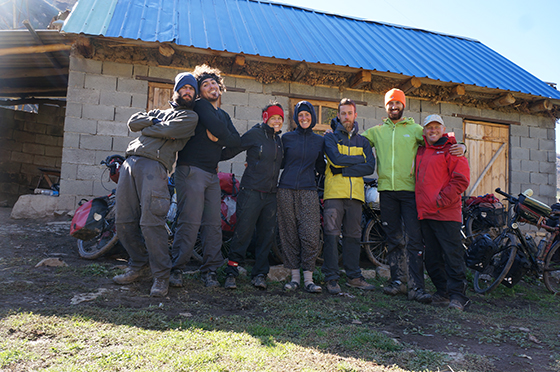 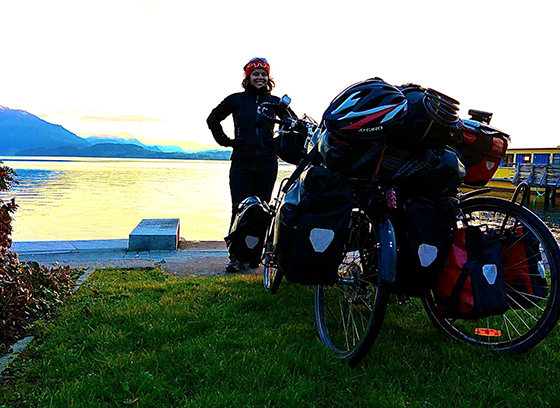 Given your experience, would you recommend the all-in method that you chose? Or would you recommend a long-term plan to gain experience in bike touring by starting with local tours that allow you to return home to a comfortable bed, followed by tours that required some travel, followed by international tours? I'm intrigued by stories of people who go all in, but my nature requires a more conservative approach. I'm curious about your opinion of this, looking at it in the rear view mirror.

Hi Steve! Apologies for the late reply! Honestly I think the hardest part about a long tour is deciding to do it and actually quitting your job etc. So for me the all in just go for it way was the best. I honestly think you learn so fast on the road as it is that touring preparation wouldn't have made that much of a difference - and I kind of like the fact that we can look back on our early days and laugh at ourselves. In saying that, to limit stress of being completely out of our depths we started in an English speaking country (I think starting in the middle of Mongolia as an amateur would be tough!) and we also heavily researched our gear and kit so that we didn't have the added stress of crap bikes or tents etc. This may be a one sided opinion as we haven't done it the other way and can't really compare it! I hope this helps :)