When Adventure Cycling Membership Director Julie Huck (that's her above) asked me to compile a blog post about the all-time Top 5 Bike Overnights, my first thought was, "Oh, that'll be easy." After digging into it, however, I learned that it would be anything but easy.

Since BikeOvernights.org launched in February 2011, 100 stories have been published on the site. They include tales from Alaska to Florida, from Hawaii to Vermont, from New Zealand to Holland. Stories from 34 states, three Canadian provinces, and an ever-growing number of foreign countries.

So I asked myself, do I select the Top 5 Bike Overnights based on the quantity of comments they've received on the website? The number of "likes" they've gotten on Facebook? The number of times the blog post's link has been clicked through the Adventure Cycling home page? (If the final option were the criterion, Julie's own recent post, Knitting Club Tackles Trail of the Coeur d'Alenes, would come out near the top. And it definitely is one of the most entertaining and inspiring.)

Instead, I've opted to go for variety, and to pick my own favorites -- the ones I feel most directly address the goal of providing inspiration to get folks out on short bicycle tours. Not the most objective way to go about it, perhaps, but like I said, this wasn't easy. 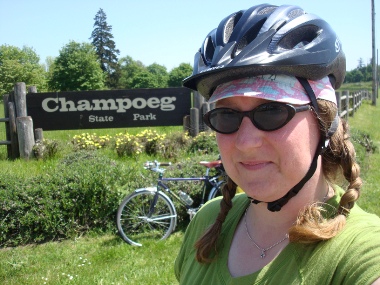 First timer. It wasn't Heather Andrews' first Bike Overnight, but it was her first go-it-alone overnighter. And I love her description of the feelings of accomplishment she earned on her First Solo Bike Overnight: Champoeg State Park in Oregon. "It was extremely important to me to do this trip completely by myself," Heather writes, "from dreaming up the concept to unpacking my dirty socks. In the past I’ve fallen prey to messages that I couldn’t do such a thing for a host of reasons. Over the past two years in grad school I’ve proved many times over that I can get through anything. In fact, challenge usually finds me rising to the occasion and kicking it square on the bum. It was something I had forgotten about myself over the past decade."

Family. In Our First Ever Family Weekend of Wonderfulness, Elle Steele Bustamante writes about a ride she and her husband, with their two young boys in tow, took from Sacramento to Folsom Lake on the American River Bike Trail. "Really, picture a nearby campground," Elle writes. "You probably wouldn't ever think to camp there as, let's face it, your own bed is much more comfortable. However, getting there by bike with all your gear strapped to the back -- that's wonderfully worthwhile." And reading Elle's story is wonderfully worthwhile, too.

Urban. Not all Bike Overnights take place in rural settings. Writes Byron Rushing in Atlanta to Stone Mountain Park, "Atlanta can be a tough town for cycling. In-town riding is accessible and convenient, but big roads and long distances often preclude comfortable trips beyond the city. However, the Stone Mountain Trail provides a nearly seamless connection from the inner neighborhoods to the state's most-visited park." The caption under one of Byron's photos captures one of the advantages of a quick bike trip: "Overnighters mean not missing Sunday brunch with my sweetie."

Rail-trail. One of many readers' favorite Bike Overnights stories, regardless of category, is Dreams of Herons on the I&M Canal Towpath (it's technically not on a rail-trail, but just about the same thing). In it, Bob Morgan writes eloquently about taking his eight-year-old grandson on an adventure: "He is a child of cities -- born in Milwaukee, living now in Chicago. He’s familiar with zoos and aquariums, museums and libraries, theaters and concert halls and galleries. His parents’ careers dictate city life at this point, so the boy’s outdoors consists of concrete canyons, city parks and playgrounds, urban rodents and pigeons. I take it as my duty to acquaint him with forests and prairies, rivers and lakes, and the creatures that crawl and leap and fly across the land."

Unique. A lot of write-ups fit this category, but none is more unusual than A Trip to the Treehouses, by Kent "Mountain Turtle" Peterson. Kent and his wife ride to TreeHouse Point, located along the Raging River only a few miles from their home in Issaquah, Washington. "While some of the TreeHouses are huge and quite luxurious, our favorite TreeHouse -- the one that made Christine squeal with delight and say, 'Oh, I want one!' -- is a high perch known as the Hermitage. It's just big enough for a single chair and a small desk, and offers an incredible view of the river. The stairs leading up to the Hermitage are counter-balanced with a rope-and-river-rock mechanism that lets them pivot up for complete privacy."

We hope you enjoy reading these special stories. While you're at it, prowl around the Bike Overnights site and have a look at a few of the other more than 100 stories posted there.

How exciting! Such fun trips, each one!

EXCELLENT choices,my friend! BTW,Julie,you rock! Thank you for helping me to experience my first of what will be many (for life,if I have a say in it) years of membership :D