Oregon DOT Steps Up on the Pacific Coast Route 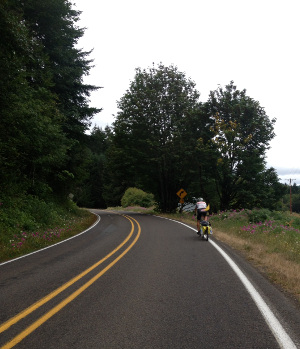 This summer, I took my bike respite on the TransAm, from my backdoor in Missoula, to Florence, Oregon. I rode with my husband (pictured above riding from Eugene to Florence) and for two weeks I shut myself off from email and immersed myself in life on the road. Overall, I was really impressed with the route through Oregon (with the exception of an 18-mile section heavy with truck and commercial traffic). Most of the time, there were good shoulders and to my delight, none of them were overtaken with rumble strips.

Upon entering Florence and making our way over the last three miles to the hiker-biker site at Honeyman State Park, my husband commented on the poor shoulders. There was debris and the paving was a mess — with a ridge down the center of the shoulder. But we only had three miles to ride and I thought it was probably an anomaly. We’d seen paving like this periodically during our ride so I didn’t dwell on it, figuring I’d talk to my contacts at Oregon Department of Transportation (ODOT) and State Parks and Recreation when I returned to the office. 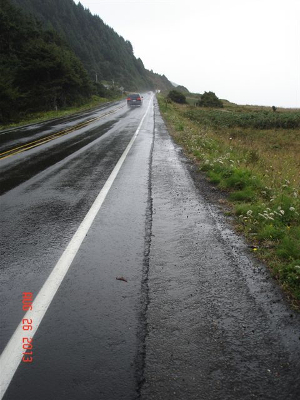 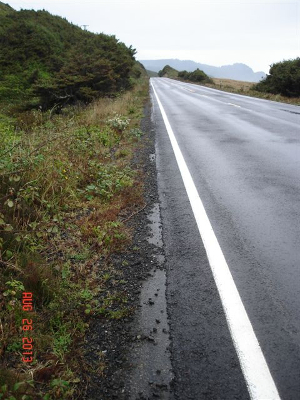 As with many things, upon my return, the details of my trip faded away under the pace of office catch-up.  That is, until I received an email from Mr. Jeff Smith, a transportation official from Portland, addressed to numerous bicycle advocates/enthusiasts, ODOT staff, and Jonathan Maus at BikePortland.org. Mr. Smith documented the shoulders on the Pacific Coast route between Yachats and Florence with photos and termed the conditions “extremely annoying at best, dangerous at worst.” It appeared that, in order to cut costs on a repaving job, ODOT contractors placed a new layer of pavement just a foot or two over the fog line, leaving an abrupt edge within the center of the shoulder — right where cyclists ride. 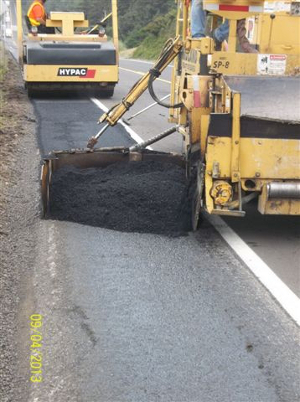 ODOT Region 2 Manager Sonny Chickering promptly responded that ODOT was looking into the issue. Within days, he emailed us again to inform us that this repaving job was done in 2011, after the agency put in place a new policy requiring ODOT to consider the safety of all roadway users during maintenance and construction projects. That new policy went into place specifically as a bike safety measure and the resurfacing was a clear violation. ODOT then began moving forward quickly to rectify the situation. Mr. Chickering laid out the agency’s plan for the fix and over the next several weeks periodically checked in with all of us to let us know how things were progressing. On September 6, Sonny informed us that nearly half of all affected shoulders were repaved but crews were delayed due to poor weather conditions. Then, last Friday, we received this final email:

“I am writing to confirm that our project to repave non-conforming shoulder surfaces along US 101 in Lane County is now complete! Following wet weather on September 5, our crew returned to the site and completed paving operations on Friday, September 6. Impacted fog lines were re-striped on Monday, September 9.

Due to the aggressive schedule developed by District 5 Manager David Warren and District 3 Manager Don Jordan, these improved shoulders were available for riders participating in the Amgen People’s Coast Classic Bicycle Tour, which got underway on September 8, and will benefit non-motorized modes of travel along this stretch of US 101 for the next two years.

Once again, I’d like to thank you for bringing this problem to my attention and for your patience as my staff and I developed and implemented an affordable, short term solution. I hope this experience demonstrates that ODOT is committed to providing a transportation system that accommodates and encourages the use of all transportation modes, and to working with you to resolve issues affecting the bicycling community.” 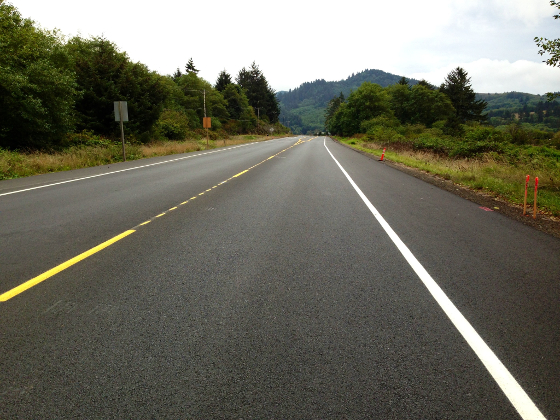 Can I just say, Wow! We, at Adventure Cycling are heartened by the prompt action by ODOT staff. Mr. Sonny Chickering and his region not only responded in writing, but in actions as well. In addition, upon my noting that there were sections of the TransAm that had this same treatment, I was encouraged to share my notes with other region managers. 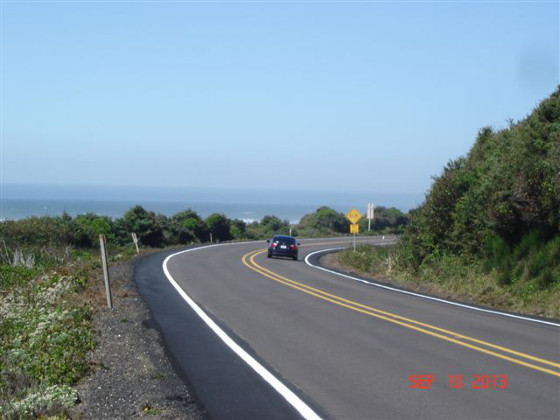 Many people weighed in on this issue, and I think it’s safe to say, we were all impressed. I hold Sonny Chickering and his region up as a positive example to the rest of the country. He has set the bar, but more importantly, he’s ensured that cyclists riding the Pacific Coast route along that 25-mile section will have a safer and more enjoyable ride. Thank you ODOT Region 2. You really stepped up.

As a resident of Oregon and an Adventure Cycling tour leader, I am very pleased with this. I lead the Oregon Coast Loop, and our group rode over this section of road (Yachats to Florence) on August 21st. We had comments on the shoulder, and it is so great that it is fixed so quickly. It will be enjoyed in August 2014 with the same tour. ODOT, thank you so much!

I look forward to extending my next visit to MIL in Woodburn to include a quick bike ride along the coast. Grateful to know I will be safe! Thank you.

In late July I did the coast route from Astoria to Crescent City and I can safely say that the most stressful (dangerous) part of my journey was between hwy 18 and Lincoln City. Almost no shoulder, lots of traffic and debris on the road.

That said, I thought that the overall conditions of the rest of the roads where anywhere from god to outstanding.

Agree - this is an exemplary state DOT response. OR shows over and over that they "get it" regarding bicycle tourism and it shows with the number of cycle tourists on the road out there. I have ridden the OR coast twice and many day trips of the CA coast. Sad to say that though I live in CA and the road is generally OK, you get no sense that CA is bike friendly. I am hoping the OR DOT mentality spreads wide, far, and fast!!