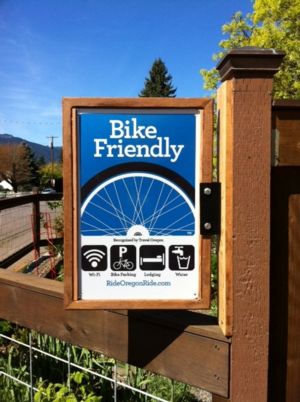 Oregon, how we (cyclists) love thee. This Pacific Northwest state excels at two of our favorite things: biking and beer. Not only is Oregon home to 11 scenic bikeway routes, the best bicycle camping around, four cross-country Adventure Cycling routes, our bike friends The Path Less Pedaled, a $400 million bicycle tourism economy, and a stellar bicycle tourism website, but it places SECOND on the list of states with the most breweries per capita. There is one brewery for every 26,791 Oregonians, just trailing Vermont’s 24,067.

The program welcomes cyclists riding through Oregon and alerts them to the many local businesses excited to serve them. It raises awareness around Oregon’s growing bicycle tourism industry, teaches businesses how they can benefit from cyclists and be more bike-friendly, and highlights businesses that are already doing it right. Many Oregon businesses have been serving cyclists for years on the Adventure Cycling routes and scenic bikeway routes that pass through the state. 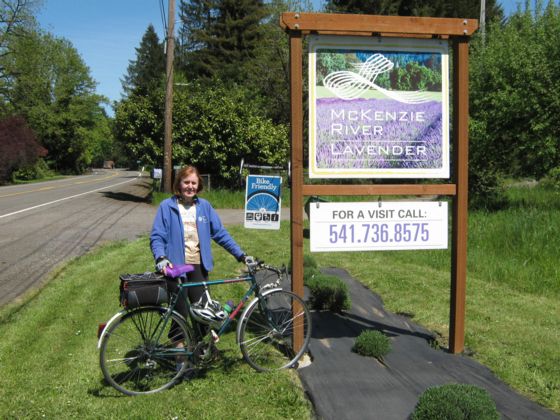 Eight businesses along the McKenzie River have already been approved for the program. Hotels, restaurants, and grocery stores have started to put up “Bicycle Friendly” signs welcoming cyclists into their establishments. Carol Tannenbaum is a life member at Adventure Cycling and owner of McKenzie River Lavender who recently applied for the Bike Friendly program.

“Each year starting in April and continuing into October we see touring cyclists pass by our lavender farm. These cyclists are riding the Adventure Cycling Transamerica Bike Trail. We are joining the Travel Oregon Bike Friendly Program to provide some support services to these long distance riders. We think it is smart business to reach out to these tourists on two wheels and serve their special needs.”

"Our primary business is serving guests who come to mountain bike the world famous McKenzie River Trail and road bike the McKenzie Pass and Aufderheide Scenic Hwy, so embracing the Bike Friendly program was a no brainer."

Apex Bar in Portland, Oregon is a member or Oregon’s growing Bicycle Friendly Business Program. Apex embodies the cycling spirit and offers ample bike parking for their many cyclist patrons. With 50 beers on tap and a thriving cycling culture, it is a great place for bicycle tourists to sample the unique flavors of Oregon's craft brews while supporting a small business.

We talked to Dave Lipps, co-founder of Thunder Island Brewing Company in Cascade Locks, Oregon, about 40 minutes outside of Portland.  Lipps rode through Missoula on a cross-country ride in 2009 and subsequently turned his love for beer, community, and the outdoors into Thunder Island Brewing - a career dream come true. While living in Portland, he used his car-free garage to house a small bike shop and start a beer CSA. The operation quickly outgrew its small space and limited hours, and expanded into something bigger that became a perfect hub for both beer and bike tourism. Thunder Island aired a long-distance cyclist portraits exhibit this month, with striking black and white photos of road warriors passing through Missoula, taken by Greg Siple at Adventure Cycling. We’re honored to be a part of making their bike-friendly vibe a reality.

“We’d like to get local businesses involved in the Bike Friendly Business Program. It advocates for cyclists, and fights for their rights! Education of local businesses about cyclists is very important. Bike travelers are tourists that contribute to our businesses.” –Dave Lipps, Thunder Island Brewing 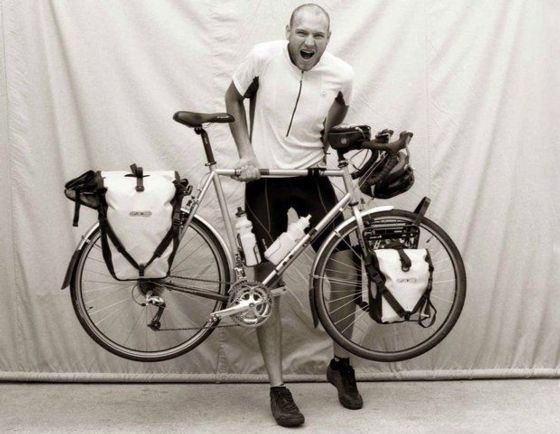 Dave Lipps portrait was taken at Adventure Cycling during his cross-country trip in 2009.

Cascade Locks is home to a brand new bike pathway, Adventure Cycling’s Lewis and Clark Trail, world class sailing competitions, 40 bike racks around town, a hub station in the downtown plaza, and many cyclists and backpackers passing through on adventures. The town is right on the Columbia Gorge, which Lipps declared “one of the most beautiful destinations in Oregon."

This summer will mark Thunder Island’s first cyclist season, which is an exciting prospect for their business. Lipps spoke highly of Oregon’s new Bike Friendly Business program, and hopes to become a part of it along with other local businesses. He emphasized the importance of education—informing local businesses of the benefits bicycle tourists can provide to them.

Oregon is leading the way in educating and encouraging bike friendly business, and we hope other states will soon follow.