On the Road: Pajama Game 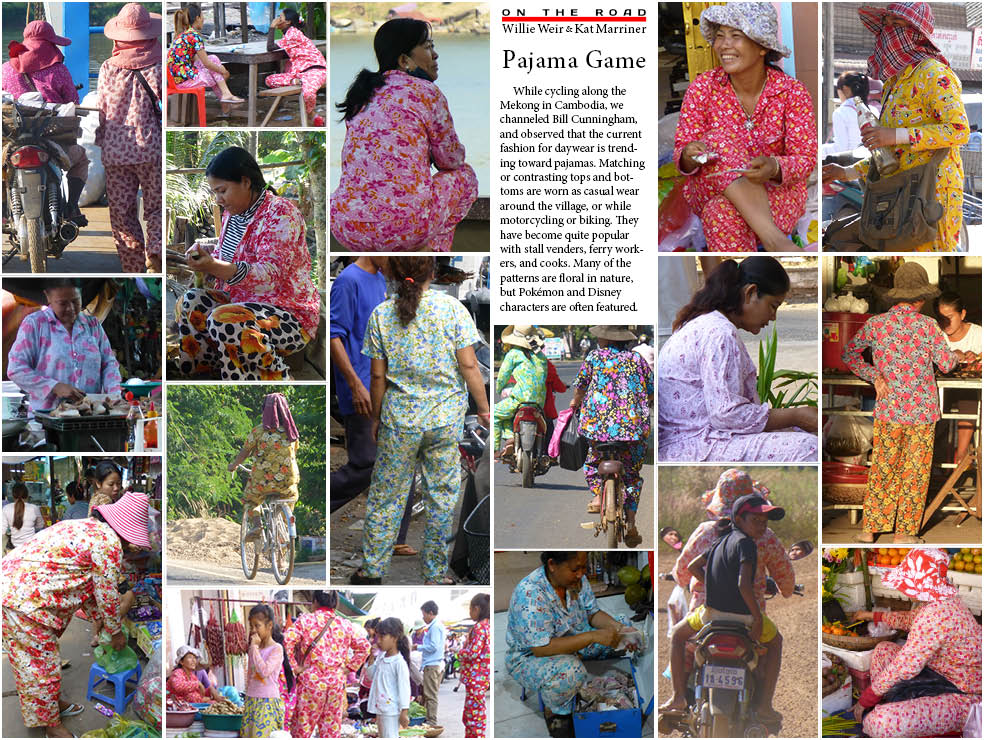 I'd like to introduce you to one of my bicycling heroes. He hasn't cycled around the world or across the country. I'm not sure if he has ever cycled outside of New York City. He has pedaled his bike around Manhattan for over 50 years, taking photos of what New Yorkers are wearing. He is still going strong at 84.

As Kat and I pedaled our way down the Mekong, Bill Cunningham came to mind as we observed many of the women wearing pajamas. If you read the Sunday New York Times, you'll instantly recognize that the collage of photos from Cambodia above is laid out in the style of Bill Cunningham's popular column, On the Street.

You don't have to love fashion to enjoy the wonderful documentary, Bill Cunningham New York. There is joy in watching the story of anyone who has discovered their passion and pursued it, especially when a bicycle is involved (I should say "bicycles" since Bill has had over 27 stolen during his career).

"There is nothing simple about Bill Cunningham, who is an artist and a philosopher. Here's what it is: Bill is happy. He has invented an occupation he does better than anyone else ever has, he has simplified his life until nothing interferes with that vocation, and now, at over 80, he is still biking around Manhattan in his blue smock of many pockets and taking photos of people who had a little extra fun when they got dressed today."

Here's to you Bill Cunningham. I'm a better observer, and therefore a better traveler, for having seen New York through your eyes.

The documentary is GREAT! I stumbled across it on Amazon, and I am so glad I did. Definitely worthy of hero status!