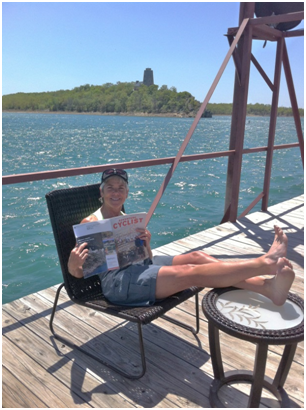 Bicycling Bliss in Oklahoma, submitted by Danna Korak and Jody Watson, was published on June 3. It was their first visit to the Sooner State. "Our bike overnight is a quick, full-speed ahead ride to the clear-blue waters at Lake Murray State Park in Ardmore, Oklahoma," writes Danna. "The best description I can provide for this destination is 'paradise.' When people think of Oklahoma, images of the dust bowl era still linger, but today, this is far from the truth. Oklahoma has a greater number of man-made lakes than any other state, with 2,000 more miles of shoreline than the Atlantic and Gulf coasts of the U.S. combined. This provides some awesome possibilities for bike overnights in our home state."

This, Danna and Jody's favorite overnight, begins in Davis, at the Two Cycle Coffee House Bicycle Club, located inside the Astoria Town Club. Lake Murray, where they're headed, is not just any old destination for them, as the ride "ends at the Mackey Doo, our 50-foot houseboat docked at breakwater #10 Lake Murray Marina."

(An aside/follow-up: On June 10, Bike Overnights heard from Danna, who wrote: "Jody and I just finished the Leadership Training Course at Adventure Cycling Association. We had the opportunity to meet Executive Director Jim Sayer and Tours Director Arlen Hall. The whole training experience was AWESOME! We plan to write a review to share with everyone.) 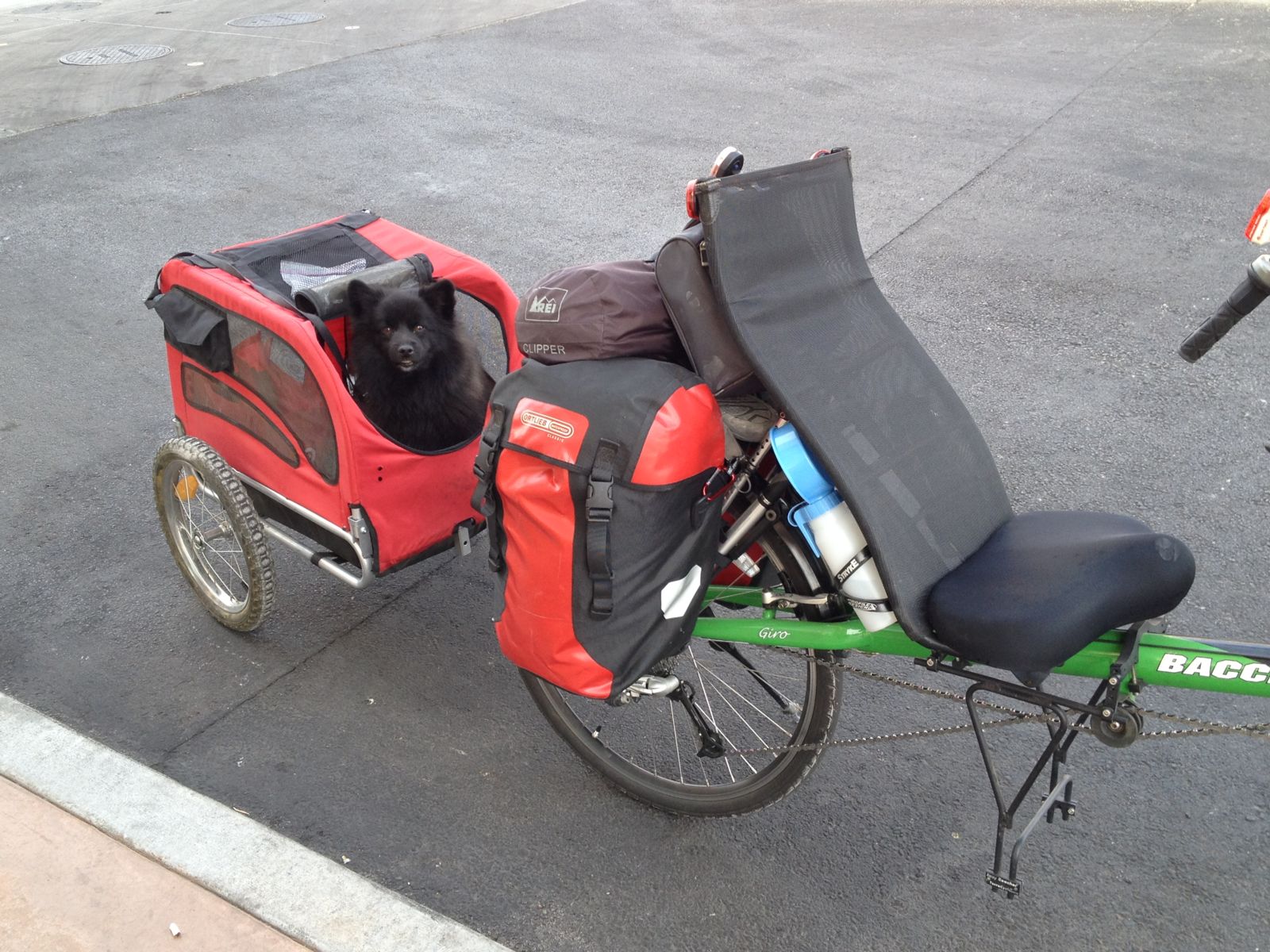 Leaving Las Vegas: Jasper the dog tries out his ride.

On June 10 Bikeovernights.org posted Escaping the Bright Lights of Las Vegas, by Corey Dalpee. Suprisingly, Corey writes, just "a step away from the glitz and glam of the Las Vegas strip you will find an abundance of resources for the outdoor enthusiast, all within a 45-minute drive in just about any direction. Go east and you can play in the waters of Lake Mead, Hoover Dam, and the Colorado River; head northwest and you can hit the slopes of 11,000-foot Mount Charleston; if you’re a hiker, Valley of Fire to the north and Red Rock Canyon to the west are sure to quench your appetite for stunning rock formations and authentic desert hiking."

Corey goes west, aiming for the campground at Red Rock Canyon. "From my doorstep, it’s approximately 9 miles to the Red Rock Canyon Campground west of town. I left late on a Saturday evening, with my dog Jasper hitching a ride in his trailer. I was thinking it wouldn’t take me long to get out there, and I could surely make it before it got dark at 8 p.m. But somehow, in the two years it’s been since I last rode a loaded bike across the country, toting around 40 pounds of dog and gear proved that my legs weren’t as strong as my mind seemed to think they still were. All told, it took me nearly two hours to travel that short distance, and I arrived at the campground well after dark."

Visit BikeOvernights.org for these and dozens of other great ideas for quick adventure getaways.