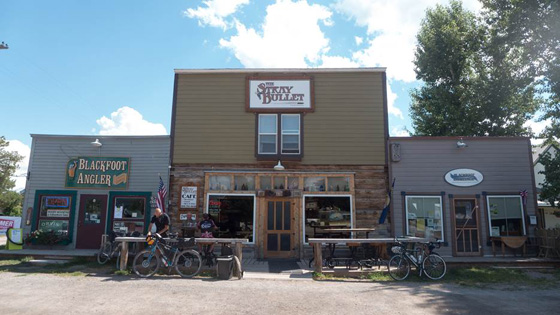 Small towns dot our route network from sea to sea and border to border. With a population of 50 people, the tightly knit community of Ovando sits on Montana Highway 200 in the midst of ranch country at the intersection of two of our routes, the Great Divide Mountain Bike Route (GDMBR) and the Lewis & Clark Bicycle Trail. Ovando embraces the cyclists who trickle through their town every summer with great enthusiasm. In 2012 the number exceeded 400 cyclists.

We at Adventure Cycling began taking note of this bicycle travel friendly community in 2004 with the advent of the now defunct Great Divide Race*. This self-supported race of the entire length of the GDMBR, brought with it a noticeable influx of traveling cyclists pedaling through Ovando on an annual basis. Townspeople noticed and began adding services to specifically to support these self-propelled travelers. 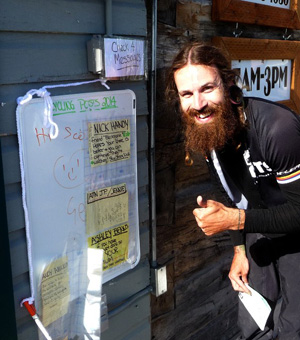 In 2014, Nick Handy happy to receive a posted greeting on the message board.

Over time the amenities have expanded to include a camping area, indoor sleeping accommodations, a porta-potty, solar shower and a whiteboard to share messages with fellow bicycle travelers. Limited bike parts and camping supplies are available at the Blackfoot Angler while the Blackfoot Mercantile Store has snacks, groceries and a free cup of coffee in the morning. The offerings of the Stray Bullet Cafe and Trixi's Antler Saloon and Family Diner have meals from breakfast to dinner (and ice cold beverages) well covered. There are plans in the works to add a laundromat so cyclists can leave town with freshly cleaned clothes, too. 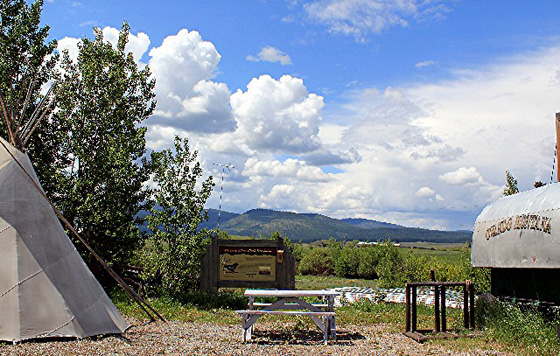 Cyclist-specific indoor accommodations include a teepee and the free-standing Shepherd's Wagon as well as the restored jail now called the Hooscow (not pictured).

When queried via Twitter, one rider (@Iowagriz) remarked on his experience at the cafe, "late July, sitting on deck of cafe, not paying attention to time, past close, they don't care & keep serving us" followed by "Great people at the cafe and nice warm spot to hangout. Only problem is that it was so nice that we hung out too long." 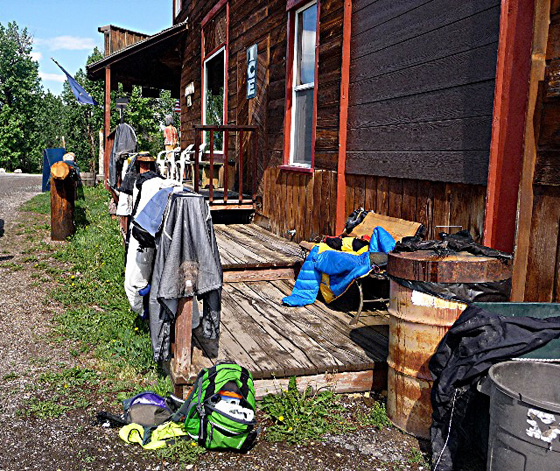 Doing, and drying, laundry is a priority of all traveling cyclists.

I recently spoke with Kathy Schoendoerfer, Ovando's "Organizer of Frivolous Affairs" and co-owner of The Blackfoot Angler. She told me about Tracy in 2012 and how her arrival was a kind of turning point for the community as a whole in their support of bicycle travelers.

Tracy had been having a hard go of it on the road. She was sick, she was tired. Someone phoned the contact number for Ovando from the map as Tracy was approaching town and alerted them to her situation. Kathy and her fellow Ovandans went into action setting up the Shepherd's Wagon with food and drink as well as moral support to keep her going.

She was so appreciative of their efforts "...it gave the entire town such warm fuzzies," Kathy recalled. It seemed only natural they would want to continue these efforts and collectively they came to the conclusion that "these cyclists are doing something we'll never do, let's try and make it easier for them!" 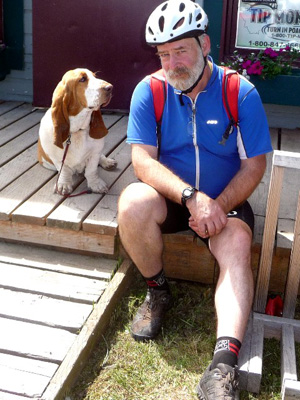 Rawley the "owner" of the Blackfoot Angler gives comfort to those cyclists who are missing their 4-legged family members. In this instance, Jean Fankhauser is the lucky recipient.

Many of the townsfolk are now self-proclaimed "blue dot addicts" referring to the exercise of watching the progress of Tour Divide racers via the online leaderboard. Kathy started taking pictures of the cyclists as they came through town. She often posts them to the online forum at bikepacking.net and corresponds with families to let them know their loved ones have passed through town and are continuing on their way. Her business has stocked limited bike parts for years.

"Those supplies didn't get much use the first few years," Kathy told me. She now receives thanks for them in the form of kisses on her cheek and marriage proposals from delighted cyclists in need. 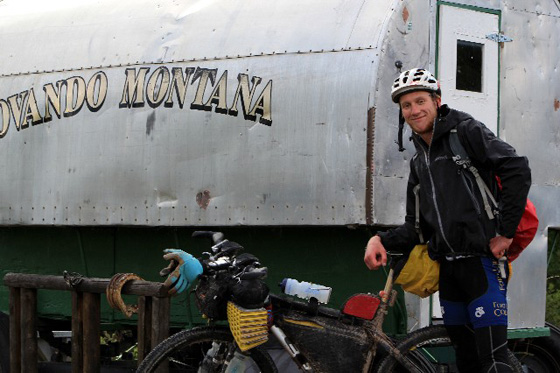 Casey Rhea found shelter from the weather in 2014.

While Twin Bridges was one of the first places in Montana to actively court bicycle tourism dollars, it is encouraging to see how their success story inspired the residents of Ovando to do the same. Now they can't imagine not having these cyclists pass through. "We can't understand the thinking of people and communities who don't want to help," Kathy says, "these cyclists help keep our town alive."

I'd say in more ways than one.

*Though the Great Divide Race is no more, the Tour Divide has taken its place and includes the Canadian miles of the GDMBR.

Last year on my half way cross the country ride, we stopped in Ovando. Very cute little town and very nice folks. I slept in the jail. Best nights sleep for a week. Everyone is so helpful and inquisitive. Great place to rest too. Everything you need: bed, food and a place to bathe.

I'm an Aussie living in Florida for awhile and when my work commitments finish up l plan to ride out of Florida and am looking for different ideas on where to ride through USA, hopefully finding a companion through your site as well.

Merrin: Depending on timing, you may want to look at the Southern Tier as an option for a mapped route out of Florida to the west. You can read details on the Southern Tier page: https://www.adventurecycling.org/routes-and-maps/adventure-cycling-route-network/southern-tier/

Good luck and have fun!