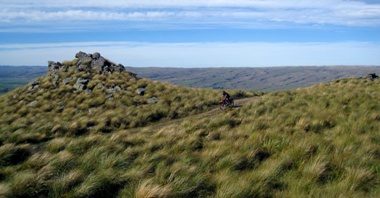 Last week I received a note from a representative of Tourism New Zealand, with some pretty darn exciting news. "Tourism New Zealand has just announced the latest cycle trail opening on New Zealand’s national cycleway," wrote Kelly Stephens. "It is a stunning cycle loop with sweeping vistas. We thought this might be of interest to you to share with your readers."

So, that's exactly what I'm doing. The press release Kelly attached went on to say: "The latest cycle trail on New Zealand’s national cycleway, the Alps 2 Ocean Cycle Trail, is opening several sections just in time for the New Zealand summer. Not just for cyclists, visitors can also run or walk a combination of quiet country roads, canal roads, and the completed sections of cycle trail in a loop from Twizel. Vistas include the iconic Mount Cook and the picturesque Lake Pukaki."

With several segments ready for riding, the full Alps 2 Ocean Cycle Trail, from Mount Cook to the coast at Oamaru, is expected to officially open in November 2012 as part of Nga Haerenga, the New Zealand Cycle Trail. At about 194 miles in length, the Alps 2 Ocean will ultimately descend more than 2,500 feet, through the Mackenzie Basin down the Waitaki Valley to the Victorian town of Oamaru. It's being billed as "a trail second to none," traversing some of the most stunningly beautiful terrain in New Zealand.

Finally, while we're on the subject of Kiwiland, be sure to have a look at last week's BikeOvernights.org post. Written and photographed by Paul Smith, it's a mountain-bike ride into his country's Rock and Pillar Range.

I am 66 years old and try to bike everyday and looking for someone to bike with me from Lisbon to Santiago something this fall. Interested in biking all winter. I am a international beekeeping volunteer, and beekeeper in Washington State. Thank you