A bike-travel revolution has officially arrived in the cycling industry, as manufacturers are seemingly tripping over one another to show off their latest “adventure bike” offerings. Almost always envisioned for dirt touring, these do-anything, go-anywhere rigs were around every corner at the Sea Otter Classic, the largest cycling festival in the world and increasingly a season-starting product launchpad for bike brands.

Walking the aisles in sunny California a few bikes stood out: 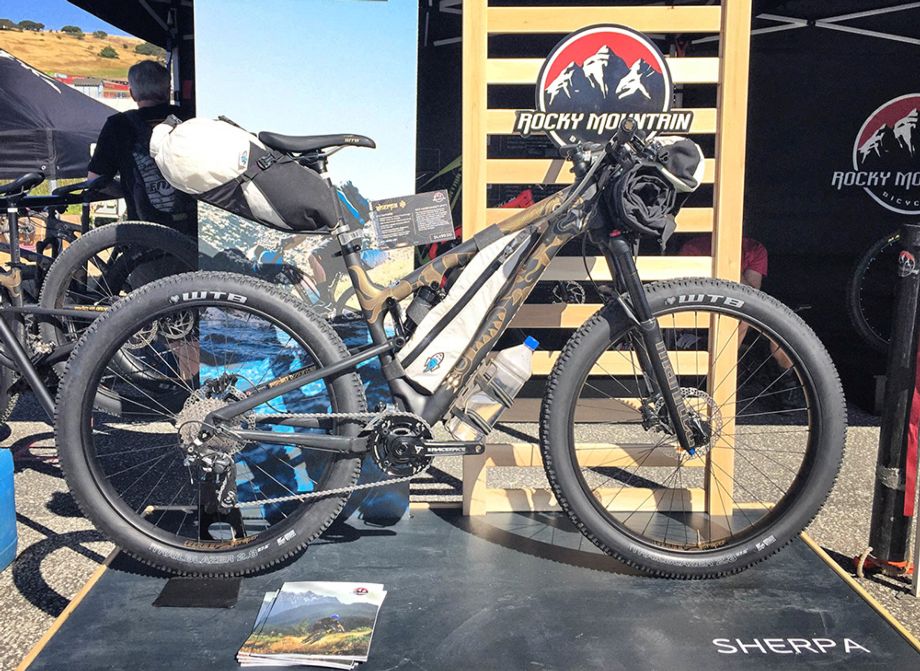 Possibly the most buzzed-about bike was Rocky Mountain’s “new” dual-suspension 27.5+ Sherpa. I say “new” because the Canadian brand showed off a prototype of the bike at Sea Otter a year ago. That model was a hand-painted work of art that now hangs in the company’s offices. The production model carries a fancy paint job of its own, rolls on 2.75 inch WTB tires and was fitted with a set of Porcelain Rocket bags to show off its backcountry potential. The bike was featured in short film put together by Rocky Mountain that screened the night before the show featuring a few of the company’s well-known dirt athletes, including freeride pioneer Wade Simmons. The movie — and the bike — are worth a long look, though the $4,499 pice tag is about as eye-catching as the paint. Available in May. 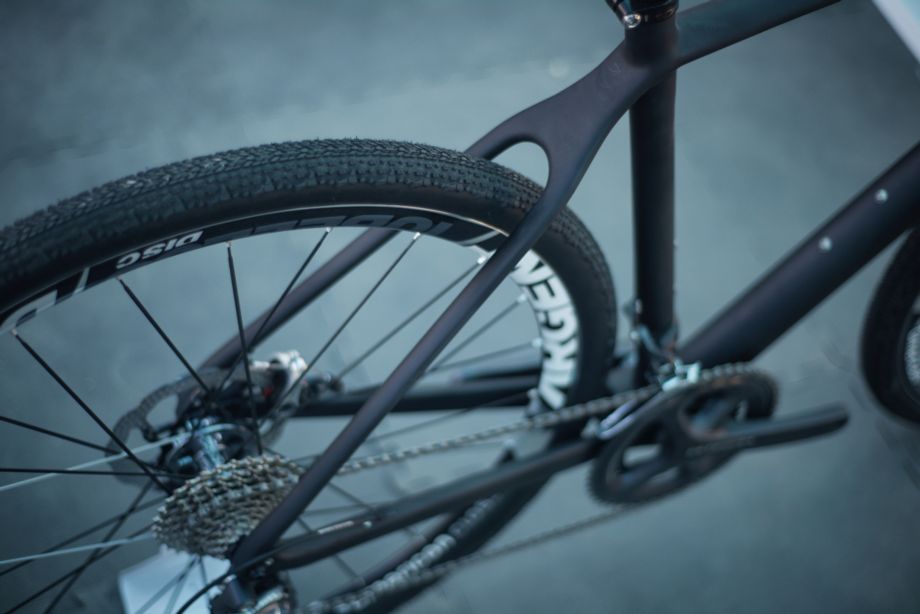 Raleigh got on the adventure bike train a few years ago with the introduction of the Tamland series (watch for a review in Adventure Cyclist's upcoming June issue), no-nonsense steel bikes with wider tires, flared bars, and rack mounts. The company was showing off a prototype of their new Roker carbon, a superlight gravel grinder with race-bike looks and clearance for 40c tires and fenders. The company also had updated cyclocross bikes on hand, complete with new proprietary tubless-ready wheels that beg to be tested on tour. 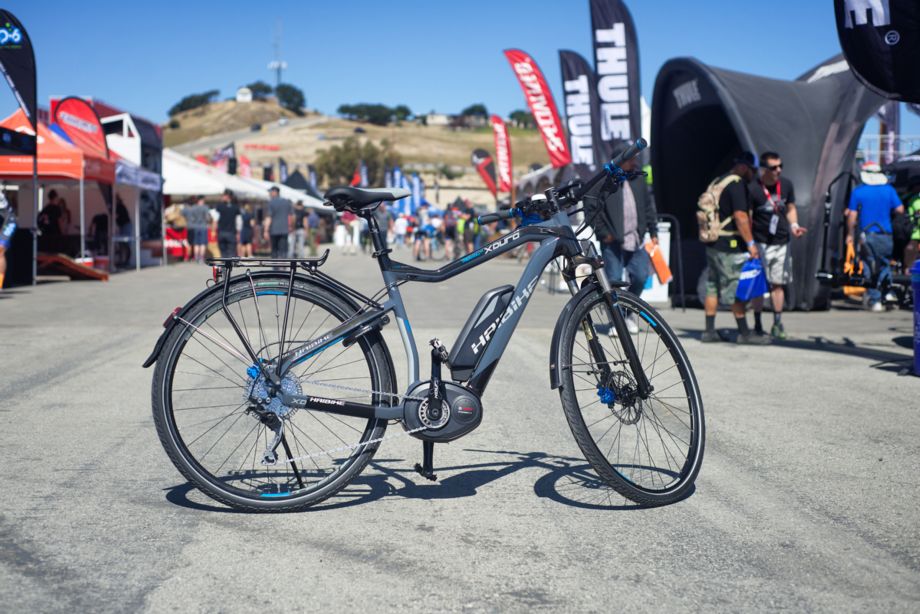 Haibike’s Xduro Trekking RX would make a consonant-lover’s dreams come true, though staunch eBike haters might find it a nightmare. The pedal-assist electric bike is kitted out with bike travelers in mind, coming from the factory with stout SKS fenders and a rear rack installed. Integrated lights are also standard equipment. I preface most eBike conversations with this: “I’m not in the market for one, but I can understand why other people are,” and that thought was running through my head as I shifted the pedal assist into “Turbo” mode and flew up a 15 percent grade on a path near the event without changing cadence or shifting. The latest Bosch motor — mounted in the bottom bracket area — is an upgrade over previous models with very smooth power delivery when the pedals start turning and a claimed range of 60 to 80 miles on flat-ish terrain when used in the still-very-powerful “eco” mode. An eBike might not be for you — or me — but 10 seconds aboard this thing and you can certainly see the appeal for someone. 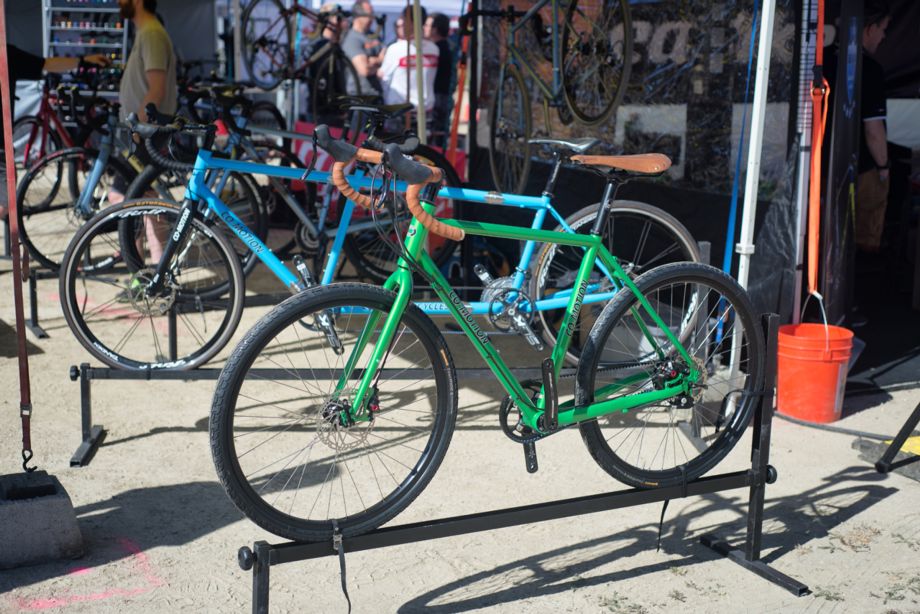 A bike that is for me? Co-Motion’s Siskiyou with a belt drive and Rohloff Hub. This green machine at the Eugene, Oregon, company’s booth was a beauty, complete with Selle Anatomica saddle and matching bar tape. We make no bones about our love for Co-Motions at Adventure Cyclist — editor-in-chief Mike Deme and advertising director Rick Bruner both ride the Divide model — and at the risk of sounding like my water bottle is full of Kool-Aid, I’m ready to plunk down my hard-earned pennies for the new 650b Siskiyou. Similar to the 29” Divide, the slightly shorter model uses what many consider to be the ultimate drivetrain combo in the Rohloff hub and Gates belt drive, and my goodness it makes for a clean-looking bike. I’d even skip the handy S&S couplers so many choose to spec in favor of the uninterrupted tubes and a little more of the company’s top-notch paint. The only problem might be being too happy staring at it to mount up and ride. 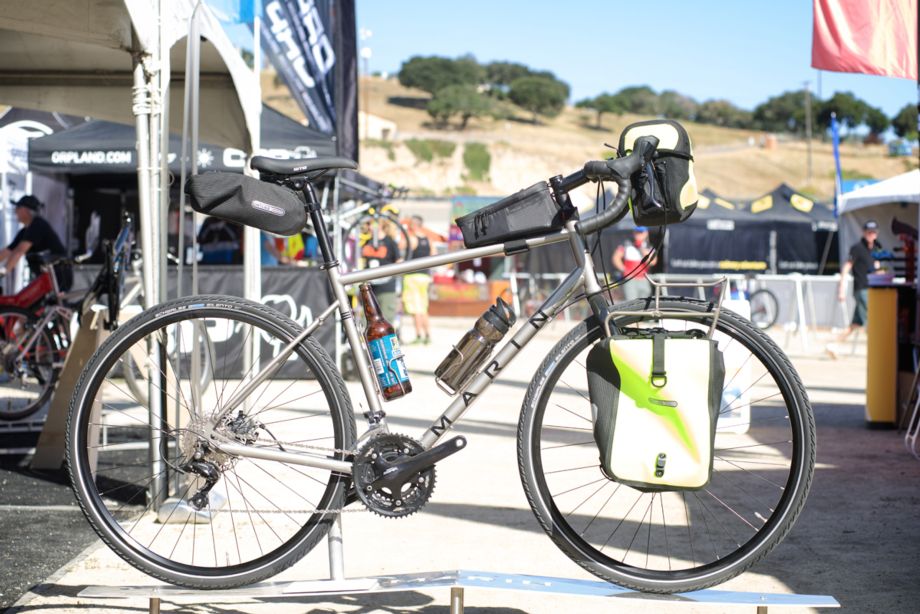 When I first got into mountain biking in the mid-90s, my best friend saved up for a Marin Team Issue hardtail frame in pearl white that remains the second-best paint job a bicycle has ever received (the best is the late-90s Schwinn Homegrown’s bassboat blue. If you disagree, please, keep it to yourself!). Marin was looking forward and back as the company celebrates 30 years in 2015 with a few classic paint jobs on new bikes, including the redesigned Four Corners touring bike. Plenty of clearance for bigger tires, all the rack mounts your heart desires, a 3x10 Shimano Sora drivetrain, and a classic look that had me wondering if my buddy’s frame is collecting dust in the back of a garage somewhere. The company was also on board the 27.5+ train with a new backcountry rig called the Pine Mountain. Sporting a rigid fork and standard hub spacing (as opposed to the new boost standard), and a wide-range 1x10 drivetrain, the Pine Mountain and the Four Corners will both sell at $1,100 later this year. 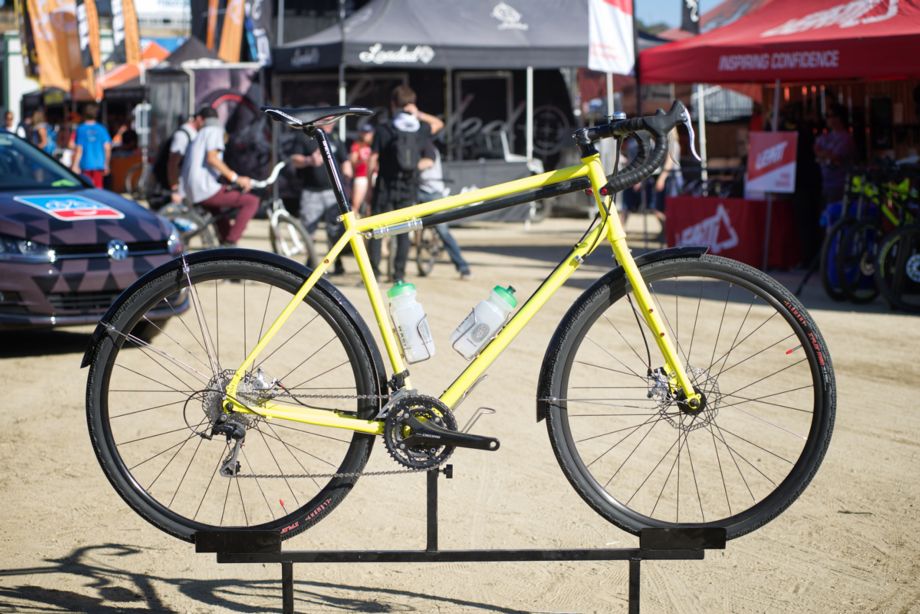 Masi isn’t fooling around with product development on its new touring rig, the Giromondo, as product manager Kellen LeBlanc left Sea Otter on the prototype to ride south for the company’s offices in Southern California. Ready for bags or racks, the bright yellow (sadly, not the color that it will wear in production) bike grabbed attention. With a Deore drivetrain, disc brakes, and tire clearance to spare, it could be a one-quiver bike for many riders. Plus, it’s a comparative bargain at $1,300 when it goes on sale later this year. If you’re a lightly loaded sort, Masi is also working up a randonneaur bike called the Speciale Rando that looks quick indeed.

Other touring bikes on display? Kona’s handsome new Sutra was well-represented in the company’s booth, along with their Rove gravel bike. Niner was showing off their attention-grabbing RLT9 steel bike complete with a full complement of Blackburn racks and bags (look for a review in early 2016 in Adventure Cyclist), and if you’re not afraid of the newfangled carbon fiber Santa Cruz had one of their reborn Stigmata cyclocross bikes decked out with Thule racks and bags and the Norco Search remains an intruiging set of wheels.

Watch the pages of Adventure Cyclist over the coming year for reviews of some of these bikes and we’ll plan to check back in on their production during the Interbike tradeshow in September.