While we had the Great Divide Mountain Bike Route (GDMBR) maps to use as springboard, when we first started talking about the Idaho Hot Springs Mountain Bike Route (IHSMBR) we knew it would end up being a bit of a departure from our standard route network maps. Some of the differences are obvious and will likely only appear on these maps. Other difference are more subtle and may be transferred to more maps in the future.

We knew that since this is a mountain bike route, we would stay with a format similar to the GDMBR. We began with one large map on each side rather than breaking the route into panels. We knew the map would have shaded relief, profiles, point-to-point mileages, lettered circle turns, narratives — bidirectional if possible, service information on the map, and a service directory, as well as interesting field notes about the region. We also wanted to include a bit of guidance for cyclists who might be new to trail riding and general hot-springs etiquette.

Once those things were established, we could start getting creative about how to implement them all. 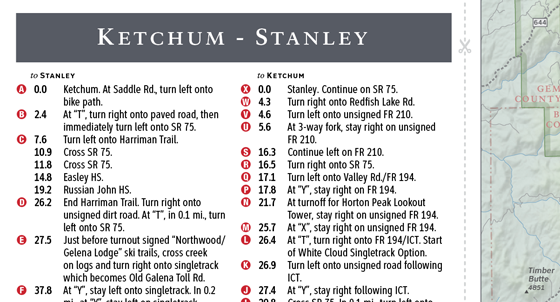 A major innovation we applied to these maps is something we are calling detachable narratives. Casey Greene, the main cartographer on this route, pitched the idea that bikepackers won't want to haul out the whole map to see what's next. His solution was to arrange the narratives such that they could be separated from the map without disturbing the rest of the layout. This smaller cue sheet could be stashed in a jersey pocket or easily reached framebag. If this is as successful as we hope, we'll look at incorporating it into future revisions of the GDMBR maps. (Please give us feedback so we can get it right.) 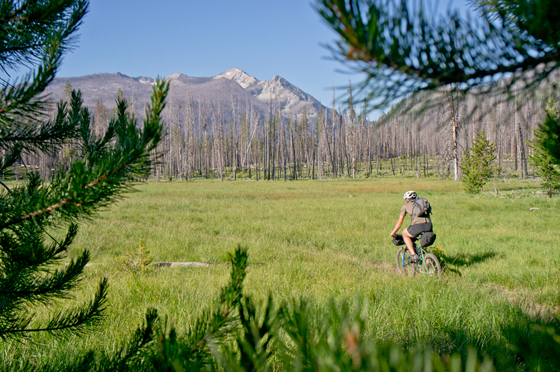 As the layout phase proceeded, Casey realized that to get the level of detail needed for the singletrack options, he would need to deviate from the 1:250,000 scale of the main map. Changing the scale for detail and inset maps is pretty standard for us. However, when he looked at how much map 'real estate' this was going to take, it was determined that it made the original paper size impractical.

Rather than breaking the main route into two pieces and having a two-map series, it made more sense to leave the main route intact and have the second map be comprised of the single track options. Hence we ended up with a Main Route map and a Singletrack Options supplement map.

The Singletrack Options Map features four additional routes to choose from with a scale of 1:90,000 and includes contour lines. The narratives given for these options are not bidirectional. If you are planning to ride any of these options with the Main Route, you will need to ride in a counter-clockwise direction. We chose this direction based on the riding preferences of locals — many of whom you may encounter on the trail. 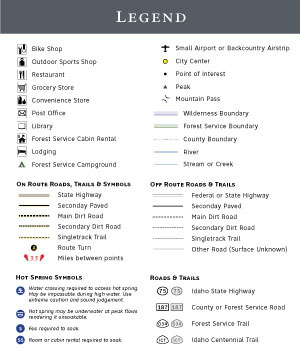 We made a few changes to the Legend to accommodate some fine distinctions in services. Examples include adding a symbol specific to Forest Service Campgrounds, hot springs and Outdoor Sports Shops while the All Services star symbol was dropped.

You'll find the Service Directory virtually the same as on all our other maps. One difference in the campground listings however is contact information was only included for those on route. Other Forest Service campground locations and names are shown on the map, as are National Forest Service boundaries, so you can explore options off route through other resources.

One last change to mention is subtle, but impactful nonetheless. Casey's fine eye for design detail led him to explore other font families. It was decided to utilize two new fonts, Clearview and Rawlinson. Clearview was originally developed for use on highway signage for its clarity. Other variants have been created for use at smaller scales and in print. The Rawlinson font was created for the National Park Service and Casey used a variant freely available for other uses. Over time we may implement these two fonts on our other maps. A decision will be made down the road based on feedback from users. 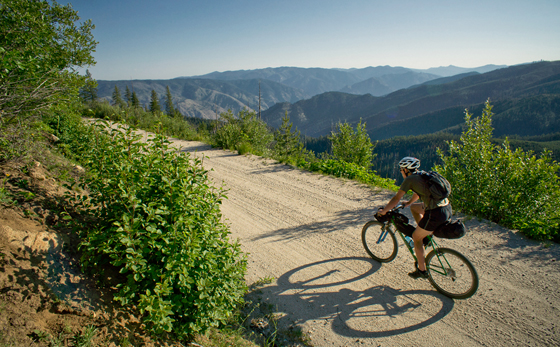 Now all that's left to do is wait for cyclists to ride the routes! We'd love to hear how it goes for you, what you like about the maps, and of course, how we can make them even better. Ride on! We look forward to hearing from you.

I was stoked to see this route a couple months ago. I live just a few miles off the route and if you look at the US map of all ACA routes one of the biggest gaps was in central Idaho and northern Utah. No more...can't wait to ride an overnighter on some of these sections this summer.

Got the maps and now planning my trip, very impressed by them.

Surprised that maps only feature miles, feet and degrees fahrenheit , would expect in 2014 to have standard.international metric units as well.

I rode with a group on the GDMBR last summer. It was very frustrating to have to find a way to fold the map so the cues and the map section could be see simultaneously. Reading about your idea of having a separate cue section jarred a memory. On the TransAm, one of our riders came up with the brilliant idea of taking the addendums, printing them, cutting them into strips, which she stapled together like a long, skinny book. As we passed a referenced waypoint, she would tear off the addendum detail and throw it away. It may be possible to do something like that for the cues. Maybe not throw it away... you brilliant people may be able to morph that idea, though.

Sorry you found the GDMBR maps hard to use, Leslie. We've done our best to get the pertinent narratives near the route is is referencing.

The tear off strips are an Interesting idea. I'll be sure the rest of the Routes & Mapping department is aware of it as we begin planning the GDMBR map conversions it and we'll see where it goes. Thanks for chiming in!

I immediately ordered the two maps and am now planning to postpone the GDMBR for the hot springs of Idaho. If I have questions, may I contact Casey at AC?

Scott: While Casey knows the most about this route, the rest of us in Routes & Mapping can answer a lot of your questions as well. You can send an email to cartography@adventurecycling.org and one of us will get back to you.

Fine job of both writing and explaining, Jen!