Bikes + trains is a multi-modal combination that in its ideal form is low-stress, low impact and extremely enjoyable. There’s nothing like the simplicity of an open-air bike ride to a train station, followed by rolling your bike onto the train, sitting back with a cup of coffee and watching the scenery roll by or reading a book. No worrying about finding a parking space, no parking fees, and no having to take your bike apart and stuff it in a box. Then when you arrive, all you have to do is roll your bike off and ride to your destination. In an age of efficiency, there are few more efficient, economical, and enjoyable ways to travel with the same resulting health, economic, environmental and social benefits.

And now, as of December 13, cyclists traveling between Baltimore, Maryland, and Washington, DC, on the weekends have this option. 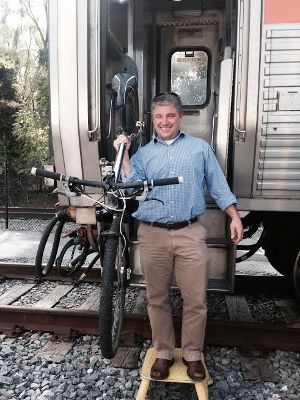 The Maryland Transit Administration (MTA) announced that the MARC commuter rail service has added a new bicycle car to its designated weekend Penn Line train that will accommodate 16 bicycles and could be expanded to accommodate up to 26 bicycles. Bringing a bicycle doesn’t cost extra and the service is first-come-first served.

“MARC passengers and bicycle enthusiasts have been asking for a bike car for years, and we are thrilled to launch this new service for our customers,” said MTA Administrator Robert Smith. “A designated bike car will help us attract more MARC passengers and increase tourism opportunities for Washington, DC, Baltimore, and all stops in between.” 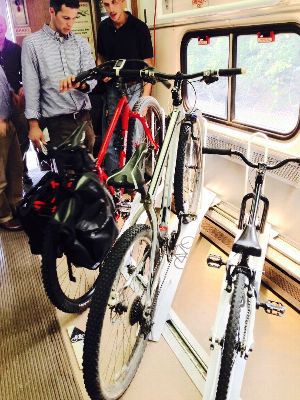 The new bicycle car was created by refurbishing an older single-level car and incorporates 40 additional seats for passengers opposite the bicycle racks. At certain stations, passengers with bikes will be required to lift their bicycles onto the train via steps, while other stations will have level platforms with easier loading capabilities. Unfortunately the rack design does not accommodate non-traditional bikes such as recumbents or tandems. MARC may offer a second bike car in the future if there is enough demand for it.

“The bike community has lobbied for more bicycle access to trains for years, and MTA listened,” said Nate Evans, Executive Director of Bike Maryland, a leading bicycle advocacy group in the state. “We are thrilled to see this come to fruition. You will see some very busy trains in the spring and summer because allowing bikes will boost bike tourism in the region.”

For those wishing to use this service, the MTA provides additional information:

MARC Penn Line trains provide weekend service between Baltimore and Washington, DC, operating nine round trips on Saturdays and six round trips on Sundays. Look for the trains with the bike symbol on the schedule. Weekly and monthly passes, or a $7 fare, will provide passengers a ride on the new weekend service between Union Station and Penn Station. Fares vary depending on the station at which a passenger boards or exits the train. One-way fare examples include: Union Station to BWI Marshall Airport - $6; Penn Station to BWI Marshall Airport - $4; and Union Station to Odenton - $5.

For more photos and information about the roll-on service, check out the Washington Area Bicyclist Association (WABA) blog post from December 12.

I am a tricyclist because I truly enjoy it. I was terribly disappointed to find out that my trike is not welcome. I think it would be a blast to ride from my front door to the Halethorpe station about three miles away, hop on the train, arrive at Union Station in DC, enjoy a little cycle tourism and go home, all without pulling the car out of the driveway.