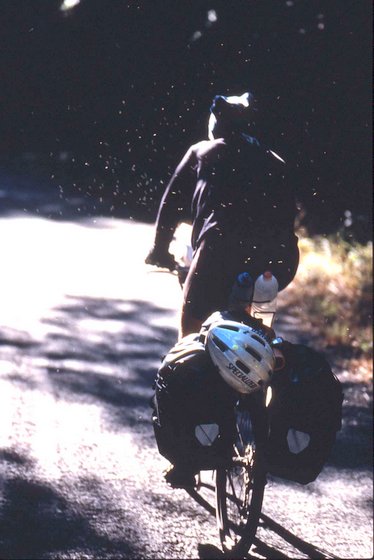 A quick glance at the above photo and most would think, "Willie, if you are going to scan slides for this blog, the least you could do is put the dust filter on."

Kat and I left the Black Sea coast in Bulgaria and pedaled up into the mountains toward Macedonia. A man who glanced at our map and saw our route said the road was impossible! We had a good laugh over that. Bulgaria's mountains seemed small in comparison to what we had already climbed in Romania.

We were soon to discover that the man wasn't taking about road conditions or steep grades. He was talking about the flies. Those aren't dust speaks in the photo. Muhi they call them. And in the oak forests of Bulgaria these little biting black flies hatch in numbers of biblical proportion.

And it was hot. Ride your bike naked hot. And we were covered head to foot in damp, sweaty clothing. The flies went for any moist orifice--eyes, mouth, ears, and nostrils.

As a cyclist I wanted to just get away from the little flying vampires. But as a journalist, I wanted to capture the moment on film. For days I tried, but the buggers are so small they just don't turn up.

Then in the late afternoon, after a short water break, Kat pedaled around a corner, and the light was just right. You could see the irritating cloud.

I called for Kat to stop and head back done the hill, then retrace her route while I got into position. I was shooting slide film with a camera with no power winder, so I could only get two shots off as she passed. I had her go back and do it again. And again. These shots were good. I was giddy.

The fourth or fifth time she passed by, she muttered in a homicidal tone I had never heard (or heard since), "This is the last #$@%ing time I'm doing this."

I caught up with her and we pedaled in silence ... except for the constant whining buzz of a million muhi. 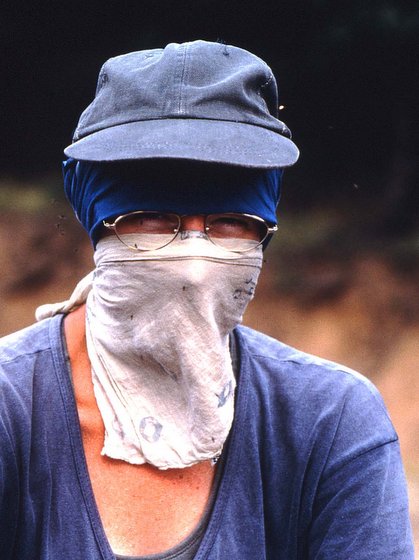