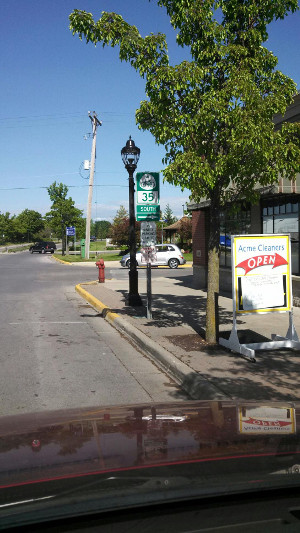 The U.S. Bicycle Route System (USBRS) is growing as anyone can see from the rising number of miles designated, U.S. Bike Route signs erected, and routes being mapped. But sometimes the progress is hard to grasp. Frankly, it can be difficult to see from our vantage point; deep in the throes of the everyday ins and outs of building the USBRS. The fun part is that every so often, and with growing frequency, a significant milestone is reached that not only reassures us, but also demonstrates measurable impacts. In June two pieces of exciting news made their way from Michigan across the Great Plains to our office here in Missoula.

The first bit of news is pictured above. Our co-worker, Alex, sent us a picture her mother took of a newly installed USBR 35 sign in Elk Rapids, Michigan. Signs are exciting to see on routes because signing is not a requirement (although highly encouraged) by AASHTO to designate a USBR. However, the Michigan DOT has agreed to sign portions of USBRs that are on state highways and Adventure Cycling was able to use a mixture of public and private funding to pay for the production and installation of the signs on USBR 20. In the case of USBR 35 in Elk Rapids, the community erected the signs to begin encouraging cyclists to use the route through their city. There are also plans to sign the route through Sault Ste. Marie. All in all, between the DOT, the municipalities, and the many volunteers involved, Michigan should be commended for their efforts to promote their USBRs, which are indeed paying off. As Alex's mother noted, there as been a significant uptick of bicycle travelers in the area.

The Michigan DOT has also released a USBRS webpagewhere cyclists can find all the information needed to successfully navigate both USBR 35 and USBR 20. The Michigan DOT created detailed maps that can be downloaded and printed and include turn-by-turn directions. In addition to the maps, the page shares helpful links for traveling cyclists. Michigan has been an early adopter and supporter of the USBRS and, once again, they are setting the bar for other states. We look forward to working closely with Michigan to track the growing number of traveling cyclists and will support their efforts to promote their U.S. Bicycling Routes any way we can!

I am glad to see that Michigan is involved with the USBRS. Our state has many scenic highways and roadside attractions. The Great Lakes are beautiful to behold and are a "tourist magnet" for everyone to enjoy.